Candidates angling for San Jose’s only open City Council seat on the June ballot shared more than a stage at a Monday forum hosted by the Santa Clara County Democratic Club.

In an hour-and-a-half question-and-answer session at Harry’s Hoffbrau, District 9 hopefuls found common ground in their reasons for running, their dislike of a contentious developer-backed ballot measure, the need for more housing and their support for rebuilding the police force.

The contenders—Rosie Zepeda, Pam Foley, Shay Franco-Clausen, Kalen Gallagher and Sabuhi Siddique (a sixth, Scott Nelson, was absent)—diverged when it came to money in politics, building density and Google’s planned entrance into downtown.

“I support Google coming and all that it can bring with it, but the devil is in the detail,” said Foley, a 14-year San Jose Unified School District trustee endorsed by the Silicon Valley Organization (SVO).

Gallagher, a teacher-turned-startup entrepreneur and five-year Campbell Union High School District trustee, agreed that the project would be a boon for city coffers, but could also price out more people and snarl traffic.

Siddique, who sits on Santa Clara County’s Human Relations Commission, said the city should be bold enough to demand enough affordable housing for the 20,000 or so jobs Google is expected to bring.

Zepeda knocked the city for what she called a lack of transparency on the Google negotiations and other developments. “A lot of those deals are done behind closed doors,” said Zepeda, a former teacher, adding: “Google hasn’t even broken ground and it’s already causing displacement.”

Franco-Clausen, a former state legislative aide who works for a nonprofit called Silicon Valley FACES, echoed those concerns about affordable housing and called on Google to incentivize public transit use for employees.

The event, which was moderated by SVO vice president and former Vice Mayor Madison Nguyen, touched on progressive points that enlivened the audience but might not play as well with a broad swath D9, which is largely suburban and, though majority Democrat, populated by more registered Republicans than the rest of the city. Among them: LGBTQ rights, transgender bathroom access, keeping corporate money out of politics and whether being a victim of domestic violence should qualify someone for public housing.

All five candidates supported that last proposal to make abuse victims a protected class. And all but one swore off donations from, developers, political action committees and special interests. Foley said she’s proud to be endorsed by the SVO (formerly called the San Jose-Silicon Valley Chamber of Commerce).

Franco-Clausen touted her progressive backing and South Bay Labor Council endorsement. And in response to an audience question about whether she supports gay rights, noted that she’s the first out lesbian to run for city office in San Jose.

Though she said she has “no platform because it should be your platform,” the mother of five has a compelling personal story. And when a woman in the audience asked how well she’d serve the district if she only recently moved there from Sunnyvale, Franco-Clausen clearly relished the chance to share it.

The short answer, she said: homophobia. She and her wife, a local cop, submitted 40 applications before they found a landlord willing to rent to them. And by that time, their apartment search had taken them from south San Jose to Sunnyvale.

“This is something you face on the regular, even when being a coach,” she said. “But as soon as the opportunity came, I moved back into the place I call home.”

Though time constraints prevented the candidates from offering much in the way of detail on policy, a few pitched some interesting ideas.

Gallagher said he’d hire an experienced community organizer to build up neighborhood associations, which are relatively few and far between in D9. He also suggested cracking down on porch pirates by planting GPS trackers on packages. And to address displacement, Zepeda said she’d like to prevent Chinese buyers from snatching up local homes in all-cash buys.

As for district-specific issues, all the candidates criticized plans to turn the aging Cambrian Park Plaza shopping center into an urban village. Zepeda said she’s opposed to urban villages anywhere in the city, which raised some eyebrows.

Gallagher and Franco-Clausen said they’d like to slow things down to include more community input. Foley called the proposal from Weingarten Realty to redevelop the mid-century strip mall “controversial” and the “wrong plan for the community.” Siddique agreed, saying the hundreds of town homes and 109,000 square feet of retail would be too dense for an area with inadequate public transit.

The candidates had little chance to engage each other—that’s slated to happen at a debate next month. But the event let them air their views and make their case for a club endorsement, which went to Franco-Clausen.

Santa Clara County’s Democratic Central Committee (DCC), however, won’t announce its pick until April 5. That endorsement carries more weight because it means the DCC can spend money on behalf of its preferred candidate.

The D9 seat, which opens up as Councilman Don Rocha terms out, is one of a few contested races in San Jose. The others are in District 7, where Councilman Tam Nguyen faces a handful of challengers, and Vice Mayor Magdalena Carrasco’s District 5. 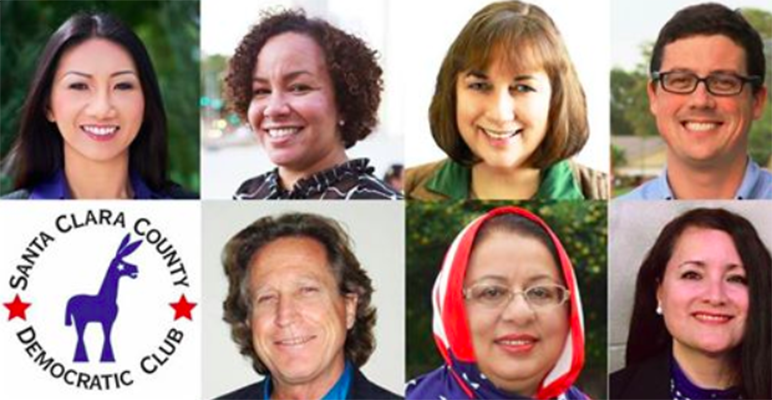