When Jorge Sanchez began hosting comedy open mics at Caffe Frascati, he could barely draw a crowd. Audiences mostly consisted of fellow standups awaiting their turn on the stage. It wasn’t uncommon for patrons to pack up and leave once the show started.

Those midweek mics have since grown into standing-room-only affairs. Sanchez—who recently celebrated his 30th birthday and the sixth anniversary of the comedy night—credits café owner Roger Springall with providing a venue for him to cultivate such a robust following. “The great thing about Frascati and their management is that they gave us space and they gave us patience,” Sanchez says.

The Italian-themed café in San Jose’s SoFA District has welcomed artists since Opera San Jose began performing at the shop-front stage 10 years ago, launching what became First Street Opera led by Amy Mendon and Melissa Mallory in synch with South First Fridays. And while it’s tough to pinpoint exactly when it happened, the shopworn niche between a restaurant and a newsstand evolved into something more than just a coffeehouse.

Some combination of Springall’s provision of space and patience, late hours and a rare ability to draw in foot traffic, perhaps because upstage abuts the front window, transformed Frascati into a veritable cultural center.

Its three open mics—music on Tuesday, comedy on Wednesday and Live Lit spoken word on Thursday­—routinely draw more than 100 people. The Bossa Blue Brazilian music night every third Friday of the month and Kavanaugh Brothers Celtic Experience! every first Saturday claim their own pack of regulars and, with the other events, earn Frascati high marks in tourism guides and make it a destination for celebrities passing through town for conventions or shows at some of the city’s marquee venues.

That makes news of its closure tough to take.

One can find better coffee, fresher pastries and more modish ambience at any number of local nosheries, he says, but it’s hard to think of another café as trusting of artists to let them regularly run the show until just about midnight.

And yet, after 11-and-a-half years of serving as SoFA’s community living room, Frascati is ready to wind it all down for good. “It seemed like a good time to make a change,” says Springall, 66, who has already moved back to his native England.

The new owners of 315 S. First St. plan to keep it a café, just one with a vastly different feel. Be’Anka Ashaolu and Jeronica Macey didn’t respond to requests for comment by press time. But according to a blog on Medium, the pair say they’ll re-open the place as a café called Nirvana Soul. Springall says the new owners understand the value of the place and “are keen to welcome local musicians and artists to the café as we have always done.”

His daughter, longtime Frascati manager Caroline Springall, 34, says that’s what makes this moment so bittersweet. “It’s been mixed emotions on our part,” she says. “I’m experiencing a lot of nostalgia.”

As are many Caffe Frascati regulars.

Gary Singh, who writes a weekly column for San Jose Inside’s parent publication Metro Silicon Valley, says he’ll miss the café for all of its flaws, from the “ratty chairs and beautifully incongruous furniture” to the “faded literary journals” and “dog-eared travel guides” lining the shelves in the upstairs loft.

“Frascati is the only coffee shop left downtown that actually still looks and feels like a real coffee shop,” he says. “It feels like North Beach in San Francisco. Or old-timey Greenwich Village. Poets, musicians, artists, drunks, professors, Bohemian street intellectuals and outcasts all just naturally gravitate to the place. Because they get it. They can tell.”

The scuffed-up wood floors and wobbly tables are part of the charm.

“At Frascati, everything is wonderfully disfigured and crumbling and gorgeous,” Singh says. “It’s the last dive bar of coffee shops.” 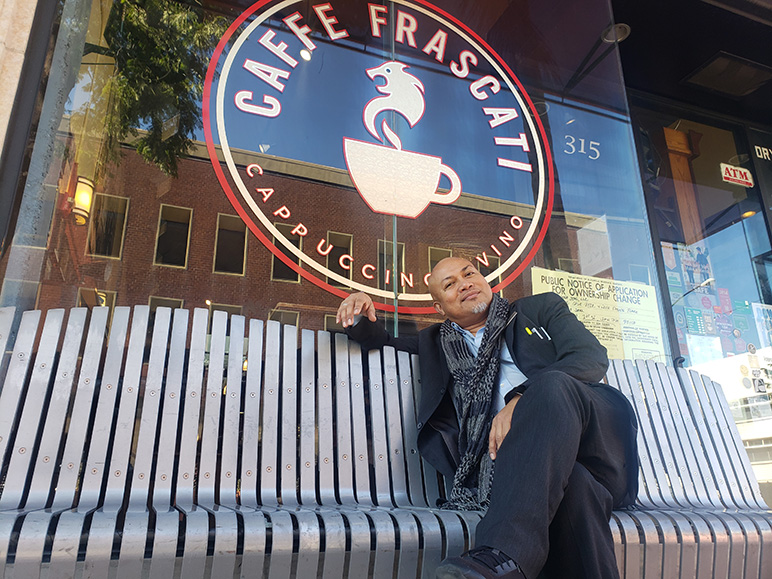 Artist, photographer and Caffe Frascati regular Robertino Ragazza Jr. says he was the first customer to set foot in the coffee shop when it opened. (Photo by Jennifer Wadsworth)

When the elder Springall defected from the tech industry to the coffee business, San Jose’s once-vibrant SoFA District was on the verge of being hollowed out by the Great Recession. But under the guidance of Papa Gianni, who founded San Francisco’s iconic Caffe Trieste, he made it work, opening his own shop under the same name.

“I still remember that day,” Caroline says. “Papa Gianni was, like, 90. They shook hands, and he said something like, ‘Now we are family.’ It was a very Godfather moment.”

After a few years, Springall decided to venture off on his own, trading the Trieste brand for Frascati—an homage to the Italian city he fell in love with when he worked there as an engineer in his twenties. Alfredo Muccino, a native of Rome who co-owned Liquid Agency a few blocks down from the café, helped Springall with branding. Muccino created Frascati’s logo of a mythical-looking creature steaming out of the coffee mug and San Jose artist Ben Henderson painted the gold-and-red design above the menu.

“It was really with the help of the community that we established our identity,” Caroline says. “My dad and I knew nothing about this business going into it, so we really were learning together, evolving with what worked and adjusting to what didn’t work.”

With Springall’s love for opera and his daughter’s skills as an artist, however, Frascati’s evolvement into a performing-arts hub was an inevitability. That reverence for artists has earned the cafe reciprocal respect and—on many occasions, as evidenced by some of the many photos that adorn the café’s walls—intimate moments with famous performers.

One of Springall’s most memorable celebrity encounters at the café was also one of the most embarrassing. In 2015, comedian Eddie Izzard wanted to swing by Caffe Frascati before his performance at the nearby California Theatre.

“The café was packed and the line of people waiting to see his show stretched up the street past our door,” Springall recalls. “So, we had to smuggle him in through the back alley and all the dumpsters, with his high heels and perfect makeup. I was mortified, but he thought it was hilarious and hung out with us and took selfies with everyone until it was time for the show.”

When he opened up shop, Springall says, he wanted it to be a place for musicians and artists and was pleasantly surprised when so many took initiative to approach him. “Almost immediately, people started coming in and asking if they could perform there,” he tells San Jose Inside, “so we bought a sound system, then a piano, then built a stage and it’s continued to grow from there.”

Unlike many venues that welcome open mics, which tend to be short-lived, Caffe Frascati stuck with its performers even when the events were sparsely attended. That the weekly events have endured as long as they have is a rarity, McGee says. “Most venues get tired of stuff after a few years,” he says. “But those shows have gotten better with time.”

Frascati’s appeal for showrunners, in some ways, defies logic.

“If you were to design a performance space, you would not design something that looks like Frascati,” McGee muses in a recent interview. “You would want something way less cramped and maybe something less rundown and with better food. I think Frascati’s success with these events and the reason it’s become such a touchstone has more to do with its sheer willingness to have unlocked doors.”

“I think Frascati’s biggest influence on others is that it made us feel like it’s OK to experiment,” he says. “I’m going to miss that. At the same time, change is good and I’m excited to see what the place becomes.”