Fifteen years ago, the editors of this newspaper offered me a weekly column, “Silicon Alleys,” to document the San Jose condition from a bent perspective only a native wacko could offer. It was entirely their idea. With no expectations, I took them up on it.

At the time, I already navigated the guts of the city in various other sections of the paper, writing art reviews, music pieces, cover stories, streams of consciousness and whatnot, yet the editors saw a potential I didn’t know existed.

In order to supplement the paper each week with bizarre ruminations on something, anything, the editors turned me loose and said, “Go for it.”

I had never in my life managed to hold down a serious routine of any sort—to paraphrase Mark Twain, I was a writer because I’d failed at everything else—so I figured it would last maybe a few months.

At first I didn’t even tell anyone I had a column. I just went right back to the bar and carried on. At the time, I was still plagued with various issues of the heart and of the drink, so more often than not, my life in the bars tended to shape the voice and subject matter that appeared in the columns.

People kept comparing me to Charles Bukowski—a claim I never made myself, but if that’s what people saw, then I was fine with it. I just kept plugging away, knowing that the various wars inside my head would contribute to a unique perspective, somehow.

The wars were mostly battles of identity. I was too academic and intellectual for the dive bar crowd, the punk crowd, or the rock crowd.

On the flip side, I was too snotty and punk for the academic crowd. I was too young for the historians and too jaded for the music scene.

If I occasionally sat in the Fairmont Lobby Lounge for some peace of mind while writing, security would follow me around, thinking I was a homeless person sneaking into the bathroom. In other cases, I’d weave French postmodern philosophy into a particular story or use 20th century art history to help contextualize a column, only to irritate the bar crowd because I used too many big words.

Some readers wanted nothing but tours through backwater industrial wastelands, while others wanted nothing but music stories. And no one seemed to understand how old I was, because I wrote columns about historical stuff only a geezer would know, but with the attitude of a rebellious teenager.

I had no crowd to truly call my own; no matter the demographic, I didn’t fit in. While I appreciated the growing popularity of the column, I retreated into my own head more. 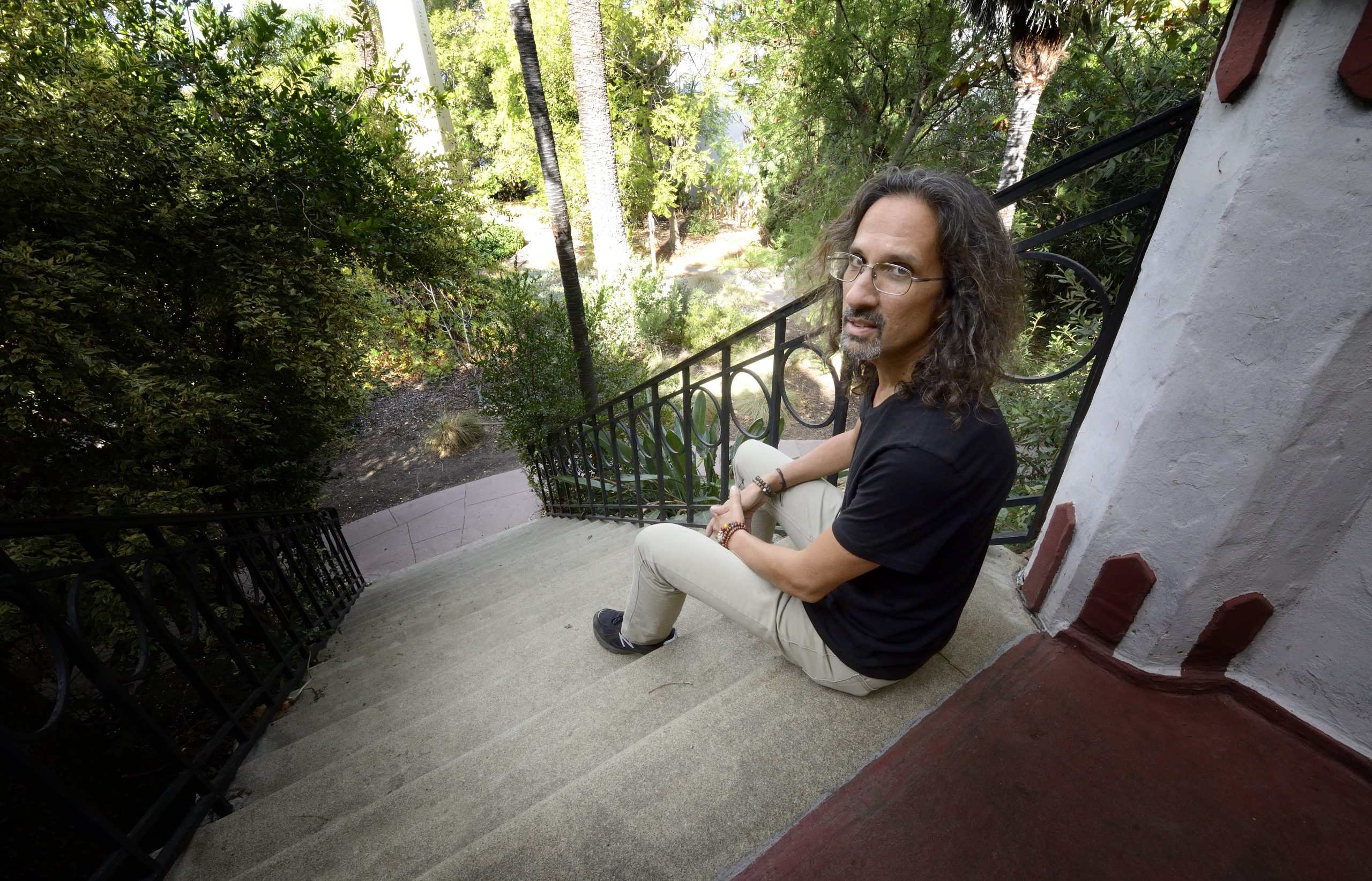 Since I’d sold off my car years earlier, I evolved into a person that walked everywhere, so everyone saw me ambling the streets regularly.

Since my column ran with a caricature of my head, people would ask me, “Are you the guy in the paper?” This still happens, by the way.

Downtown San Jose was filled with office minions who rarely met anyone interesting, and none seemed to understand why a skinny, long-haired dude roamed the streets everywhere. Someone actually told me I was “exotic” because I didn’t own a car. He was right. This was San Jose, after all—like Herb Caen once said, “Eleven freeway exits in search of a city.” My entire existence seemed to confuse everyone.

It was so fun, I had to keep writing.

Exoticism was a metaphor in many columns. When my dad came here from India in the 1950s, he was viewed in the same way. He was “exotic.” My mom was white, so I was therefore half and half, misunderstood by both demographics, but there were ways to graft that metaphor onto any possible San Jose subject matter and use it as a creative device to frame a story. It wasn’t even work; it was life.

I always found material to write about, but I was also always torn. Half of me wanted to leave San Jose forever and the other half wanted to stay, and this schism was a subtext in almost every column I wrote. I knew I wasn’t the only one who felt that way, because almost everyone else told me the same thing. I felt like a true writer in the sense that whatever my problems were in life, writing was a necessary part of the healing process. I had to write my way through it all, whether the readers picked up on this or not.

Thankfully, though, I developed a snarky natural voice, one that would never be tolerated at a daily newspaper, or the consumer magazines to which I’d already contributed. In the process, I discovered an intrinsic proclivity for transforming any possible subject matter into a comment on the state of San Jose.

As a native, I’d grown up with all the trappings of a place that still after decades couldn’t figure out if it wanted to be a big city or a suburb. Every giddy feel-good project San Jose tried to implement, and the ways in which it botched every desperate scheme to achieve name recognition, only seemed to reinforce its own attention-starved identity complex.

There was a darker side to this, too, of course. Over time, I realized that in many columns I was basically exploring my own identity problems, but through the lens of San Jose’s identity problems. If one hailed from a conflicted city, and didn’t manage to escape that city, those conflicts tended to emerge in his writing.

And thanks to an addictive brain, each column seemed to trigger a craving to write another one. The dopamine rush wouldn’t stop. As long as I was engaged in the process of writing, my spirits improved. I communicated with my fingers on a keyboard much better than I could ever do via conversation. When writing, I was transported to a space where I actually belonged. I didn’t feel that way anywhere else.

For once in my life, I’d found a way to harness all my interests and perspectives and tap into my own innate talents. No one had ever asked me to do that.

No one had ever wanted me to do that.

Of course, each week was different, depending on the mood of my muses of creativity. Even after I’d surmounted my drinking problem, I realized various flavors of unprocessed trauma still remained, but via writing I could transform the trauma into something more productive, whether or not anyone else knew this was happening between the lines. 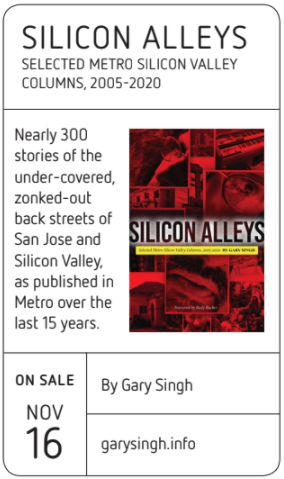 Best thing is that once I got sober, the writing improved, although it happened slowly.

I felt it became more three-dimensional, gradually much deeper and still more introspective as the years unfolded, but without sacrificing the San Jose wackiness. Regardless of subject matter, I always at least tried to provide a subversive sense of humor.

I was often told that even when scraping the bottom of the barrel of cynicism, even when bashing the city up, down and sideways, I always seemed to offer a sense of optimism, somehow.

They pointed out that underneath the darkness, hope existed. I never knew if they were talking about the city of San Jose or me personally, but this was probably the best compliment I could ever ask for.

As long as I had an ability to elevate the ignored people and stories of San Jose, as long as I could make residents feel a sense of place, I felt better myself. Yes, San Jose will always be disregarded by everyone else in the world.

Most older natives have come to accept this and left it for the younger ones to argue about. Lucky for me, the whole city seems terminally “off the beaten path,” and thus always ripe for zonked-out column fodder.

I realized soon enough I was sitting on a goldmine.

You can order it however you prefer to order your books.

From punk rock to high art, from dive bars to luxury digs, from literary vibes to forgotten history, the guts of America’s 10th largest city come alive in the pages. I have nothing but gratitude for this town, warts and all.

Years ago, I began to understand the city of San Jose as a character in one long story, told via Metro columns each week. Whether San Jose is the protagonist or the antagonist in that story remains to be seen, but I hope my journey will inspire others to take up their pens, or keyboards, and engage their own version of San Jose in brand new ways.