Don Gagliardi sipped on a dark craft beer at ISObeers Bar in downtown San Jose as he peered curiously at the projector screen across the patio.

Sitting in second place in the District 3 council race behind policeman Raul Peralez, he shrugged at his early projection. “All that matters is the top two,” he said in reference to making it to the November runoff. By the time the polls had closed, Gagliardi had retained his slim lead over Kathy Sutherland, edging the former City Hall staffer and community organizer by just 115 votes.

Gagliardi's supporters on Tuesday night, almost five dozen strong, swapped stories at the outdoor tables and snacked on meat and cheese (and we mean A LOT OF CHEESE), as well as a vegetable and fruit platter.

One might Gagliardi to be preoccupied with the results, but the first thing he mentioned to a reporter was a beautiful, untapped space located down a stairwell and behind the bar that could be converted into an additional nightlife hub. 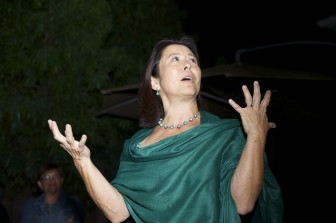 Sutherland played it low-key at home while serving Casa Vicky’s comida of homemade tortillas, chicken, rice, beans and chile verde. Outside friends and family sipped on red and white wine as well as a few Modelos. Despite trailing in third after the first two rounds of results, Sutherland was upbeat she could stage a comeback.

“What else can I do?” she laughed.

She then gave a thank-you speech to her many supporters before making sure no one was about to leave. “We also have champagne!” she hollered into the karaoke mic.