Since you may not get a chance to pick up the latest print issue of Metro, be sure to check out this cover story in our e-edition instead.—Editor

The sounds of clinking glasses and pinballs ricocheting off bumpers usually fill the air at the Campbell bar and arcade LVL Up.

For the last two years, South Bay gamers with pockets full of quarters have crammed into the ground floor of the Gaslighter Theatre building to eat, drink and play more than two dozen classic arcade games from Donkey Kong to Mortal Kombat. At the back of the nostalgia-fueled venue, board games and card decks pile high atop rows of shelving.

But over the last few weeks, the number of patrons mashing buttons and reaching for Candyland has dwindled as COVID-19—the illness caused by the novel coronavirus—sends shockwaves through the South Bay. As St. Patrick’s Day evening arrived, an eerie silence fell over the streets of the valley’s normally bustling entertainment districts.

The highly contagious virus is at the root of the unprecedented shutdown. Santa Clara County has confirmed 155 cases and five deaths since the first diagnosis on Jan. 31. Local health officials have taken increasingly aggressive measures to ward off the spread of the respiratory illness over the last two weeks, including banning large events and encouraging social distancing.

At the state level, Gov. Gavin Newsom on Sunday imposed more restrictions, asking restaurants to cut capacity by half and keep patrons at least six feet apart from one another and calling for the closure of all bars and nightclubs.

On Monday, seven counties in the greater Bay Area—including Santa Clara County—ordered residents to “shelter in place,” declaring that people only leave home for necessary errands, such as trips to the grocery store. Similar orders in San Benito, Monterey and Sonoma counties followed on Tuesday.

But with more people holed up at home and major events getting slashed by the hour, eateries, bars and local artists are bearing the brunt of the economic fallout of the coronavirus. On Monday, the UCLA Anderson Forecast predicted that California employment would shrink at an annualized rate of 2.6 percent over the next six months, with the state’s unemployment rate rising to 6.3 percent by year’s end, with the loss of 280,000 jobs, disproportionately in the leisure and hospitality sectors, within a year.

It’s been less than two weeks since LVL Up co-owners Josh Schulenberg and David Ramsey debuted their second venture—LVL Up Respawn—on south Second Street in downtown San Jose. Building on their success in just a few miles away in Campbell, the budding arcade-enthusiasts were hoping to replicate the lively watering hole in the space of the former Bo Town Seafood Restaurant.

But instead of large crowds flocking to play a game of skee ball, it’s been quiet. “You hope to open the doors and everyone should be excited,” Schulenberg says. “Instead of people being excited, people are scared. It’s not the welcoming that we were hoping for.”

The situation escalated on Sunday afternoon after Newsom gave the order to close bars throughout the state. Schulenberg described what comes next as “chaos.” 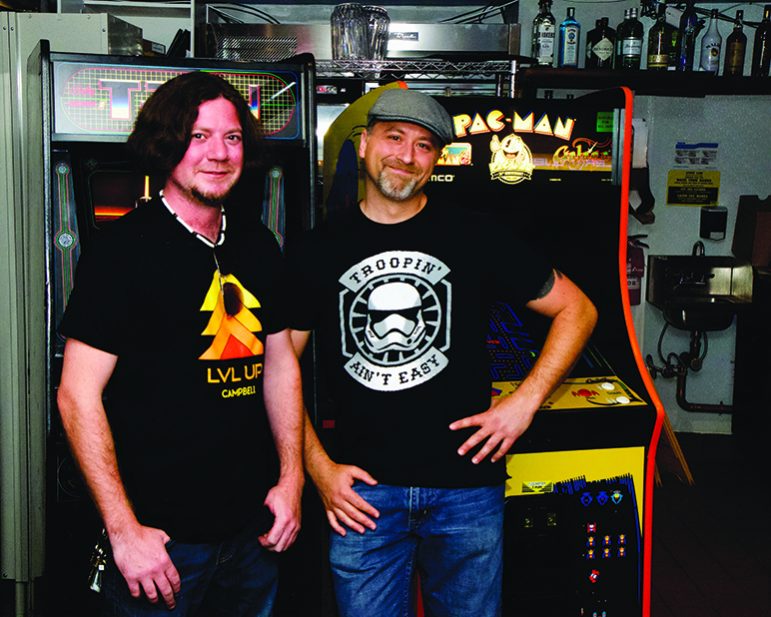 “We can’t pay anything,” he says. “The impact is as bad as it gets. It sucks when your employees ask if [they’re] not going to get paid.”

Even before LVL Up temporarily closed, three corporate parties with 85 to 100 attendees canceled or postponed events, Shulenberg says. To make up for some of the lost earnings and help bridge the gap, LVL Up was considering cutting staff and the owners picked up unpaid shifts. Schulenberg has already alerted his landlord that he won’t be able to make rent this month. “We’re doing what we can for a business to survive,” he says.

For many businesses, the economic impact of COVID-19 grows by the day, and many restaurants such as Original Joe’s, SuperGood Kitchen and the vendors in at San Pedro Square and SoFA Market have already shuttered by choice for the foreseeable future. Team San Jose—the city’s tourism arm—has kept tabs on the ripple effect that the cancelation of 13 conferences and 28 theater performances is having on the capital of Silicon Valley. The figures are staggering—topping out at eight digits.

Team San Jose spokeswoman Frances Wong says the city alone has forfeited $14.6 million in revenue from canceled conferences at the McEnery Convention Center. City employees working those events have also taken a hit—losing out on a combined total of 79,000 work hours. “From a travel industry perspective, we’re all just keeping a close eye on this,” Wong says.

The numbers are also expected to go up as Team San Jose calculates losses from show cancelations at the four city-owned theaters: the Center for Performing Arts, San Jose Civic, the Montgomery Theater and the California Theatre.

In addition to the millions that would have been dumped into the city’s coffers, Wong says they’ve estimated an $18 million loss in direct spending to local businesses. That figure includes costs of hotel rooms or other post-conference venues that attendees would have booked. Nearby restaurants, bars, shops and attractions are also estimated to miss out on $8.6 million that visitors would have spent outside of conferences.

And as San Jose begins gearing up for its annual budget process, Mayor Sam Liccardo says he expects COVID-19 will have a “negative impact estimate that ranges, as high as, or even as low as, $100 million” on the city. 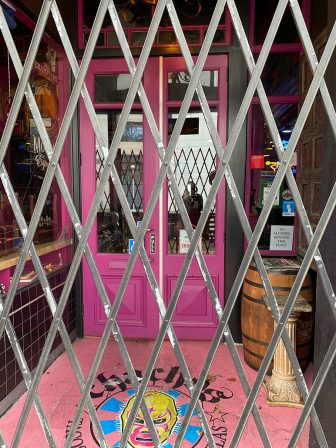 Chacho's in San Jose has had to go dark. (Photo by Dan Pulcrano)

Matt Mahood has been a chamber of commerce executive for nearly two decades. The president and CEO of the Silicon Valley Organization (SVO) survived both the dot-com crash and the 2008 recession.

But this, he says, is different.

“No one has ever experienced what we’re experiencing right now, so there is no playbook to go by,” he says. “It affects everyone.”

SVO, the South Bay’s de facto regional chamber of commerce, has been working with local lawmakers to enact policies that would ease the economic blow to small businesses, such as deferring business taxes or providing zero percent loans.

Mahood says that they’ve also been working with local partners to establish a fund similar to what Amazon set up in Seattle. Last week, the online retail giant announced that it would spend $5 million to help support small businesses, including bars and restaurants, while sales decline and more and more people work from home.

But for mom and pop restaurant owners in downtown San Jose, it isn’t just the dwindling lunch crowd that’s sparked concerns—one of the area’s largest economic drivers has temporarily closed. Situated on the western edge of downtown, the SAP Center packs in 17,000 people on any given night for Sharks games and concerts. But with local health officials cracking down on large gatherings and the NHL suspending its season until further notice, the typically bustling arena has gone dark.

For Sushi Confidential owner Randy Musterer, the fallout has been devastating for the catering side of his business. Besides the Campbell and downtown San Jose restaurants, Sushi Confidential also operates a concessions stand outside of section 223 at the SAP and provides in-suite catering for the arena. In the last few weeks, the sushi chef has lost out on $40,000 in catering gigs and saw 12 other events cancel in a 48-hour period.

“The catering gives us the ability to not have to micromanage our labor on an hour to hour basis,” Musterer said. “It gave us the slight buffer to stay open late and fight through some of the slow time. And it allowed more specifically our sushi chefs and other catering staff to be able to make extra money in tips and gratuity.”

Without the added revenue stream and fewer customers coming in, Musterer says he had to reduce his own salary and has tried to cut hours across the board so he doesn’t have to lay off any employees. “There’s going to be a lot of restaurants going out of business,” he says in a recent interview. “Is this going to last a few more days, a few more weeks, or a few more months or a few more years for the full effect to present itself… We have no clue when people are going to come back.”

In light of Santa Clara County’s shelter in place directive, which only allows restaurants to operate delivery and take out, Musterer says that he’s decided to only keep the Campbell storefront open. The restaurant will also be limiting its menu as some items take longer to prep than others—especially with a skeleton crew. “We’ll have to see over the next couple days how people respond to the new order,” he says. “But we’re prepared to continue it for our customers and we hope everyone feels safe to order out.”

The seasoned restaurateur is also encouraging patrons to purchase gift cards at their favorite small businesses that they can use later on when social distancing is lifted. 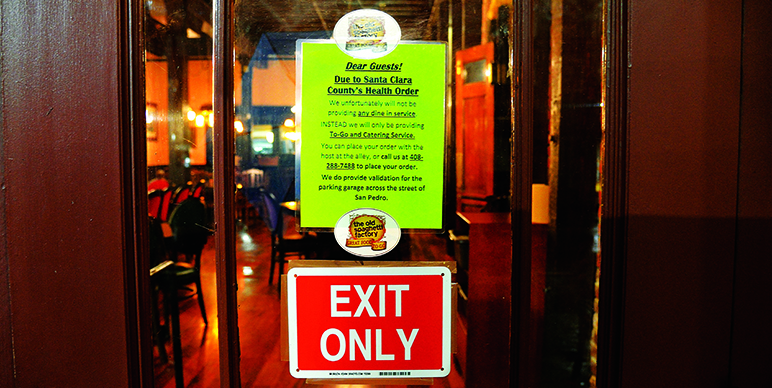 The Old Spaghetti Factor in downtown San Jose is closed for now.

Heather Orth never got to take her final bow as the Princess Puffer in The Mystery of Edwin Drood. The musical, which is based on an unfinished novel by Charles Dickens, was about to enter its final weekend at the Lohman Theatre at Foothill College in Los Altos Hills when its run was cut short.

The dominos began to fall in the local arts community—which had already been shaken by AB-5’s restrictions on contract work—as county health officials imposed increasingly stringent regulations on the size of large gatherings. Cinequest postponed the second weekend of its annual film festival to August and local theater companies like City Lights, TheatreWorks and Opera San Jose soon followed suit.

“When you look at things in perspective, you have to realize this was absolutely the right choice,” Orth says. “On a personal level, it’s a loss for the people who worked so hard.”

When she’s not performing on stage, Orth works full time at TheatreWorks in marketing and communications. But some of her fellow thespians aren’t so lucky and instead supplement their wages with hourly work. She says the last few weeks have been a “terror grip” on the local theater community as artists witness their income drying up. “I have so many friends—they’re watching their shifts disappear, their shows disappear,” she says.

But the cancelation and postponement of productions is having a ripple effect that impacts more than just actors’ pockets—many of them rely on being employed for a certain number of weeks out of the year in order to qualify for health insurance.

In an effort to keep its doors open in the long-run and support local artists and musicians, Opera San Jose has created a relief fund. Director Khori Dastoor says the cancelation of Mozart’s The Magic Flute has resulted in a loss of $435,000 in wages. But instead of giving total refunds, Opera San Jose has asked theater-goers to donate their tickets back. “I think we don’t know yet how many of these organizations, institutions will survive,” Dastoor says. “We’re hoping to be among the companies that are still here… It’s just too soon and too crazy and the news is still being processed.”

Dastoor says she fears that once the pandemic passes, the local theater community will have evaporated as diminished wages and high housing costs force actors, musicians and artists out of the region. “We rely on all the people to build and make and create and draw and sing and dance and move,” she says.

“When this started to unfold, I thought, ‘Oh my god, who will be left?’” 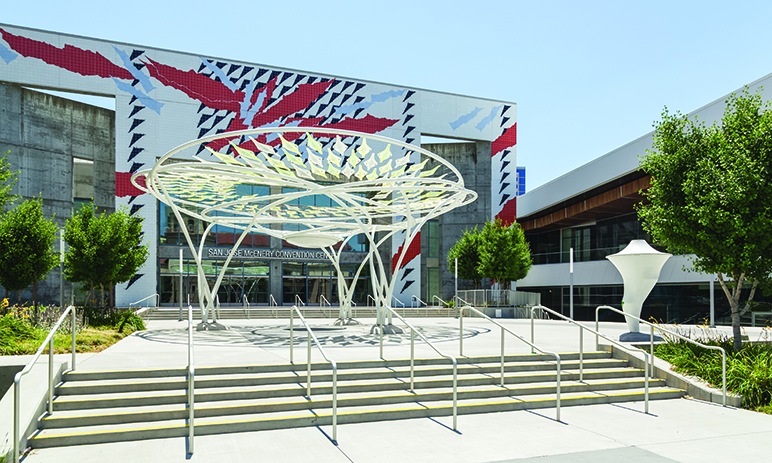 The McEnery Convention Center has lost many millions of dollars in revenue from canceled events. (Photo by Greg Ramar)

This story originally appeared in the March 18, 2020, issue of Metro Silicon Valley. For past editions of all our papers, feel free to peruse our digital archives.