Amidst all the nail-biting in an anxiety-ridden election year, a close presidential contest between two old dudes was the last thing we needed.

There was good news, too.

A text message from Oregon reminded us that our neighbor to the north had become the first state to legalize psychedelic mushrooms.

The thought of staring up at redwoods and hallucinating away the next four years on psilocybin sounded more attractive by the minute.

Mayor Sam Liccardo appears poised to lose his business-friendly majority with Lan Diep headed to defeat by a several-hundred-vote margin with nearly 60 percent of the votes counted this morning, while ally Dev Davis fended off a hard-fought challenge on the city’s well-gentrified west side.

Though dodging comment on how his Diep-less final two years at City Hall would look, the mayor excitedly changed subjects to the successful Measure G, which would expand the San Jose Independent Police Auditor’s powers, and Measure RR, a three-county initiative to sustain Caltrain.

“This was a measure that was very near left for dead a couple months ago,” Liccardo reminded. “I’m grateful several people came together, overcoming a lot of mistrust and disagreement across the region to take a chance in passing a measure that will not just save Caltrain, but enable us to dramatically bolster service in a way that will provide a real alternative to gridlock on 101.” 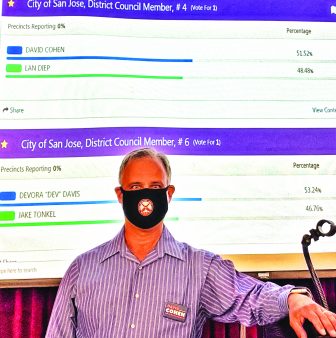 By this morning, with 58 percent of ballots processed, she held a comfortable lead over her upstart opponent.

Davis’ challenger—biomedical engineer Jake Tonkel—celebrated with family at a small outdoor gathering with A Slice of New York pizza. Despite trailing, Tonkel said he felt optimistic with so many votes left to be counted.

In North San Jose, Diep spent his evening with supporters on Zoom, and family members at home.

Even with the results trending ominously, the councilman said he didn’t really feel anything. “Obviously it’s not good, but I’m not down for the count either,” he said. “I’ve been here before.”

In 2016, Diep won the primary by a mere 12 votes, so for the time being, he’ll wait until the long-suffering folks at the ROV count all the ballots.

Berryessa school trustee David Cohen also ditched the usual election night party for a virtual gathering with supporters, although he did appear at the South Bay Labor Council to watch the 8pm round of returns. “I feel good about the lead,” Cohen phoned in. “We’re just going to be patient and let the votes get counted. I’m cautiously optimistic.”

Underdog Lee, a former Sunnyvale mayor, finished a four-way spring primary as runner-up to Chu, whose higher office and past tenure as a San Jose councilman gave him name recognition in the District 3 supervisorial contest.

“Can you believe it?” Lee asked in a phone call from his campaign headquarters in Milpitas. “Campaigning is all about shaking hands, kissing babies and having rallies—but all those things have turned out to be illegal—unsafe in a pandemic.”

“The big issue really wound up being Covid and the economy,” he observed.

When the first rounds of returns posted, with about half the overall ballots tallied by 9pm Tuesday, they showed Lee with a decisive lead over Chu.

“We are very, very pleased with the initial results,” Lee said. “We’re looking very good right now and happy to have won Milpitas, [San Jose’s] Evergreen area and Sunnyvale. But the night is still young.”

Once he saw where the race was headed, Lee shifted the conversation to the challenges of overseeing the county’s massive hospital system and a stretched safety net.

“Whoever ends up with this job has their work cut out for them,” he said. “But right now, to be honest, I’m more nervous about the other races—the national ones.”

In a follow-up text, Lee credited his success to “good teamwork,” reaching out to 30,00 homes, a strong social media presence and positive mailers.

At first Dave Cortese hesitated to declare victory in one of California’s most hard-fought races, the contest for Senate District 15 against Ann Ravel, but with a 15,000-plus-vote lead around 9pm Tuesday, he started offering thank-you’s to the team that helped him get to that point.

“This is a wonderful, wonderful, start to the vote count,” he said. “I think we calculated it pretty simply as a 7 percent lead with about 210,000 votes counted already. That's significant. I think all of you who want to celebrate, have a right to start celebrating now.” 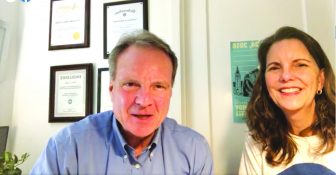 In a Facebook Live message to supporters on his personal social media account, Cortese offered an off-the-cuff speech from his East San Jose home, sitting next to his wife, Pattie Cortese, who had just won her own re-election to the East Side Union High School Board of Trustees.

Initially, the longtime Santa Clara County supervisor was going to play a pre-recorded message at 9pm, but, buoyed by the trajectory of early returns, opted instead to give his remarks in real-time about a race he called “the biggest and toughest campaign that I’ve ever been involved with.”

Cortese faced off in the race for the open senate seat representing most of Santa Clara County against Ravel, the former chair of the Federal Elections Commission, who nabbed former President Barack Obama’s endorsement for her run.

Alex Lee maintained a commanding lead in the Assembly District 25 race, which covers parts of Santa Clara and Alameda counties.

His firm hold on more than 70 percent of the votes put him on track to become the youngest lawmaker in the California legislature. “We are definitely highly encouraged by it right now, but of course the election isn't finalized,” he said.

Despite the modest reaction to what seemed about to transpire into an inevitable landslide victory, Lee, a Democrat, said the turnout wasn’t a total shocker, noting “our district is very democratic and very progressive.”

During the primaries, his team knocked on 30,000 doors to get the word out about his campaign, but were relegated to virtual and online events due to the pandemic. “A lot of those relationships we built during the primary really paid off here,” he said.

If by the morning Lee is declared the victor of the AD25 race over perennial GOP contender Bob Brunton, he promised that his values espoused during the election would not be lost in his move to the capitol.

“I am a corporate-free candidate, and I don't take any money from corporations that seek to unduly influence our democracy and I am going to keep that commitment,” Lee declared. “I believe in representing my community and not special interests.”

YOUNG BLOOD: Alex Lee is about to become the youngest and first openly bisexual lawmaker in the California legislature.

Republicans got a mollywhopping up in the 13th State Senate District as well, where Democrat and tech entrepreneur Josh Becker trounced mechanical engineer Alex Glew for the seat left wide open by Jerry Hill.

The night was still young for Assemblyman Evan Low (D-Campbell) when the first round of results came in for Proposition 18. Low—who is also up for re-election this year—was one of the co-authors of the state measure that would allow 17-year-olds to vote in the primary election if they turn 18 by the general.

But early returns showed that 53 percent of ballots counted were a “no” vote.“Of course, this was always going to be an uphill battle given the wide variety of different propositions,” Low said. “However, I’m encouraged by seeing the record turnout, specifically amongst young people, and I hope that will make an impact too.”

Low said he plans to reintroduce legislation that would make Election Day a holiday. “This is the spirit of California,” he remarked.

Omar Torres received more than double the votes of any of his challengers to win a seat on the Evergreen College district board, as did Bob Livengood, which is good news, because it means he’s still alive.

Not many winners in this election won their first race in 1976.

In Milpitas, wild man Rich Tran coasted to a lopsided victory in a three-way mayor’s race that included former county supervisor Pete McHugh, who’s also, amazingly, still alive. Trailing in third, however, incumbent Councilman Bob Nuñez seems headed for defeat to newcomer Evelyn Chua. At the head of the pack, in a race where the top two council contenders win a seat, it looks like Anthony Phan will coast to another term.

In Gilroy, CPA Marie Blankley creamed architect Reid Lerner to become mayor of Gilroy, and union organizer Rebeca Armendariz appeared to be heading towards winning one of the garlic capital’s council races.

In Santa Clara, where the going rate for a City Council seat is apparently now a million bucks a pop, three allies of Mayor Lisa Gillmor crashed to defeat, costing her control of the seven-member body’s majority.

The trio of new council members—Kevin Park, Suds Jain and Anthony Becker—benefited from a $3 million expenditure by 49ers owner Jed York, who was accused of trying to buy the election. The other special interest in the race, big developer Related Santa Clara, also tried to purchase the vote, but for 10 cents on the dollar.

A quarter million dollars just doesn’t buy what it used to and discount shopping just doesn’t work in a city that’s up for sale to the highest bidder.