School may be out for summer, but Alum Rock Union Elementary School District trustees are in line for detention. A state audit last month walloped the five-member East San Jose school board for failing to oversee millions of dollars in bond money. Recommendations included stripping the district of financial control and asking the District Attorney’s office to investigate. Alum Rock awarded Del Terra Group, led by CEO Luis Rojas, a contract in 2013 to handle construction and the management of tens of millions of dollars in bonds. But a state audit, sparked by an anonymous tip, identified instances of double billing and invoices for work that had not even started. Even worse, trustees were so oblivious that they let the contract lapse in 2015 and continued to pay for services. When Alum Rock’s interim chief business officer raised issues of fraud in a letter near the end of 2016, the audit notes, trustees ignored the message and instead called a special meeting to draw up a new contract with Del Terra. On Wednesday, beleaguered county schools chief Jon Gundry is set to report out the audit and recommend that his office take over the district’s finances. Alum Rock school board President Khanh Tran, who did not return a call for comment, vehemently opposes such a move, reportedly noting Gundry has his own dirty “laundry.” But to get a clearer sense of the dysfunction in Alum Rock, one need only take a closer look at Tran’s erratic public statements. He often throws out the term “fake news” and even labeled concerned parents a “scripted mob.” Tran plans to challenge House Rep. Ro Khanna in next year’s election, and Fly turned up a perplexing endorsement from disgraced ex-county supervisor George Shirakawa Jr., who went to jail for misusing taxpayer money. When announcing the endorsement on Facebook, Tran wrote: “Thanks George Shirakawa for your support. I surely cannot win this 2018 Congressional District 17 Race without you.”

Below is a screenshot of Khanh Tran’s Facebook page. 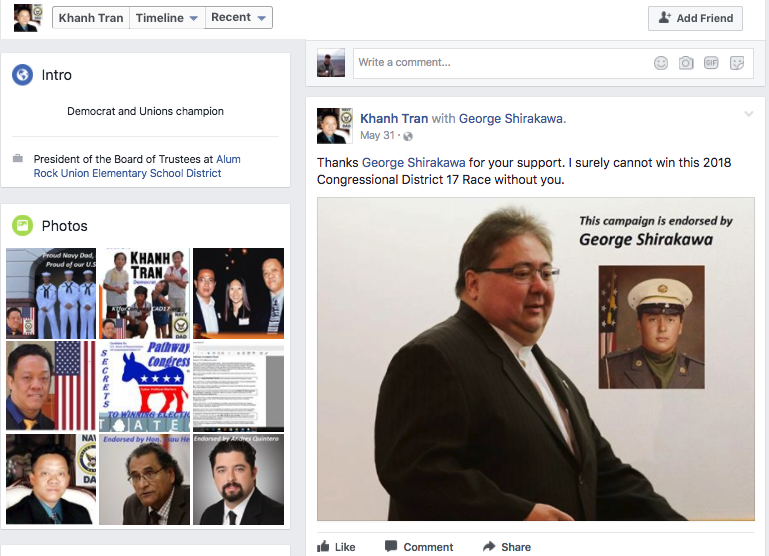