The most exciting measure on next year’s primary ballot in San Jose will not involve another push to legalize marijuana, or raise the minimum wage, or a countywide effort to eradicate homelessness. No, the most hotly contested item expected to go before voters next June revolves around—of all things—a billionaire-backed old-folks home in the Evergreen foothills.

On Sept. 8, the city of San Jose received a notice of intent to gather signatures and place a measure on the ballot that would change zoning restrictions for senior housing in one of the East Side’s more opulent neighborhoods. The Evergreen Senior Homes Initiative, which would build 910 units across 200 acres of land currently designated for industrial use, is expected to receive a title and summary from the city attorney no later than Monday. Those documents will then be used to gather the autographs of 22,277 city residents. If successful, a measure will be placed on next summer’s ballot.

The initiative—billed as a way to create more affordable housing for seniors and veterans in one of the country’s most expensive areas—is being pushed by real estate billionaire Carl Berg and deep-pocketed developer Chop Keenan. It has the endorsed support of some once-heavy hitters in South Bay politics: Judy Chirco, who served as vice mayor of San Jose; Pat Sausedo, once the vice president of the organization formerly known as the San Jose Silicon Valley Chamber of Commerce; and Eddie Garcia, a Comcast lobbyist who went on to become a life coach after working as chief of staff for George Shirakawa Jr., the ex-county supervisor who landed in jail for stealing money from taxpayers and campaign donors.

Those last names might be recognizable to some voters, but it’s the real estate magnates, Berg and Keenan, who are driving the effort to bypass planning commissioners and the City Council in favor of the electorate, leaving elected officials such as Mayor Sam Liccardo to cry foul.

“This proposal purports to be about affordable housing and senior housing,” he says, “but really it’s a proposal for billionaire developers to build housing for millionaires.” 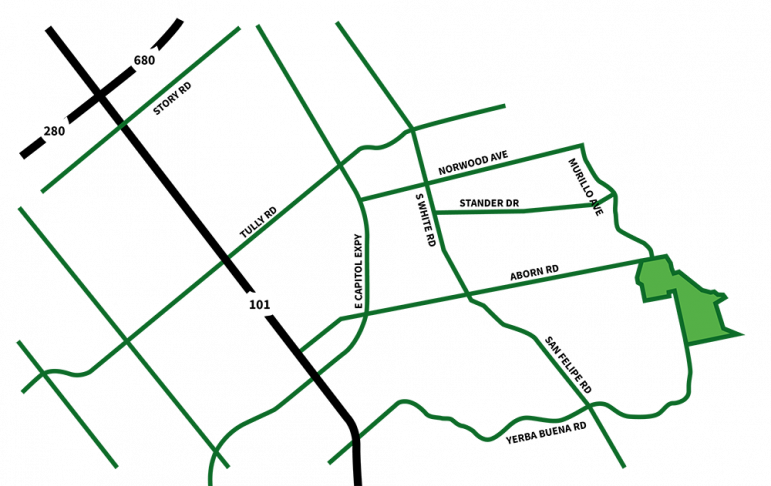 Here is a map of the area under consideration for new senior housing development in the Evergreen area. (Courtesy of the Evergreen Senior Homes Initiative)

The proposal would add language to the city’s Envision San José 2040 general plan and create a “senior housing overlay” that amends the Evergreen-East Hills Development Policy, which affects an area of land that has been in Berg’s cross hairs for decades, as well as other underutilized industrial parcels in San Jose, such as Coyote Valley, which Keenan and others have pushed to develop for quite some time, over the objections of environmentalists and balanced growth advocates.

Together, the two men have a reputation for bringing cities to their knees. Keenan once won a $36.8 million judgment against Half Moon Bay that threatened to drive the sleepy beach town into insolvency.

Meanwhile, Berg once sued San Jose over a development in Evergreen that included the site now in question, leading a jury to award him $6 million.

“Carl has been around a long time,” says real estate attorney Chuck Reed, San Jose’s former mayor, who like his successor opposes the proposed development. “He’s one of the big land developers of Silicon Valley, and he’s made a boatload of money being a developer. He’s creative, innovative, persistent, stubborn—I think all of those things apply to him. You don’t succeed without a lot of effort, and he’s done that.”

Efforts to reach Berg and Keenan were unsuccessful.

But the plan’s scope and tactics represents a disingenuous pledge, Reed says. The city has consistently opposed changing land use from industrial to residential, as San Jose deals with an ongoing jobs-to-housing imbalance.

“I think all of this is a smokescreen for an expansive, expensive development for seniors,” Reed says. “I’m a senior. I’m a veteran. Hopefully, they’re going to sell me a $2 million home for $100,000, but I doubt it. They’re going to have to build affordable housing anywhere they build. That’s not exactly a change from standing policies.”

Liccardo notes that San Jose already has 7,000 new apartments in the pipeline for development, and a general plan that allows for 50,000 new units without any amendment, as well as “another 70,000 within the general framework.” If fully built, the city would grow by more than a third.

The Evergreen Senior Homes Initiative—if it ever makes it to voters and meets approval—would put the city on the hook to build out infrastructure for traffic, water and electricity in areas currently considered too remote to service cost effectively. Liccardo, who admits to unsuccessfully attempting to convince Berg to sell some of the land, also suggests that the plan has a poison pill in the “small print.” When it comes to a traffic mitigation plan, the initiative notes that all funding will have to come from “new development beyond existing development capacity (excluding projects pursuant to the Senior Housing Overlay).” Essentially, the city suspects, the new development would be off the hook for roads while adding thousands of new drivers to the region’s roads.

Liccardo thinks the city “shouldn’t have a different set of rules for billionaires than everyone else,” adding that the initiative bypasses the planning department and council’s normal public processes.

“To not even give us an opportunity to evaluate the proposal, this tells me they believe they’re above the rules,” Liccardo says, adding that 910 new units with an average cost of roughly $1 million dollars allows for some pretty “straightforward math” on the scope of the project.

When asked to confirm the project’s value, Marissa Currie, a spokeswoman for the Evergreen initiative, declined to confirm a ballpark figure of $910 million. “I’m not comfortable speculating on that at this time, and I don't know if the mayor should be either,” she says.

Currie, who works for the celebrated San Francisco PR firm Singer Associates, went on to say that the focus is combating the affordable housing crisis while taking advantage of land that has sat “fallow.”

Another dispute regarding the project is how veterans will play into the election campaign, as city officials believe the initiative will use senior veterans as a pawn in drawing public sympathy at the polls.

“There is no legal requirement [to house veterans],” Currie acknowledges, “but there is a public commitment to do so.”