A landlord notorious for letting his rental properties fall into dangerous disrepair is being accused of skirting San Jose’s new tenant protection laws.

Michael Lucich has tried to raise rents higher than the city’s 5 percent allowable yearly increase, as well as evict people without just cause, according to tenants at a San Jose apartment complex on Rexford Way.

One tenant, Katherine, who asked to withhold her given name for personal reasons, says Lucich has no right to kick her out because he failed to keep the 12-unit apartment up to code and legally habitable. Lucich repeatedly demanded higher rent payments while foregoing much-needed repairs and an intractable vermin infestation, she says.

San Jose passed a law in April that requires landlords to state one of a dozen approved reasons for terminating a lease agreement. Called the “just cause” ordinance, the law was meant to prevent baseless and retaliatory evictions. Katherine says the eviction notice she was recently received doesn’t pass legal muster.

“She’s not a good housekeeper,” he says. “She doesn’t pick her garbage up, you know. But we fixed everything she needed and it’s time for her to relocate.”

An excerpt of Katherine's arbitration agreement.

However, city and court records show that Lucich has a longstanding pattern of keeping tenants in substandard living conditions. Litigation, citations, fines and media reports have done little to change the situation.

San Jose Inside initially reported on Lucich in 2015, when a lawsuit brought by a number of former tenants accused him of flouting fair housing laws. When we visited the property that year, the second-story walkway was so rot-weakened that it had to be closed off. Tenants had to be relocated during construction, and at least two were made homeless by the displacement. A judge ordered Lucich to foot the bill for their relocation costs.

Lucich, who lives in a multi-million dollar six-bedroom home in Los Gatos and runs an eponymous salon in Palo Alto with his wife, Sladana Lucich, bought the mid-century Rexford Way apartment in 1998, according to property records. Its current value is an estimated $2 million. 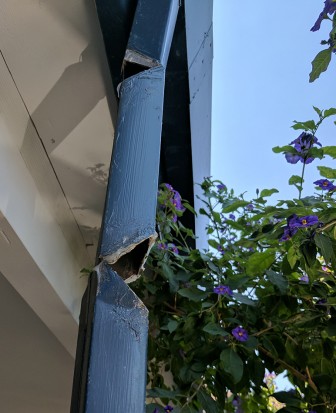 A broken rainspout at 2125 Rexford Way. (Photo by Jennifer Wadsworth)

County records indicate that Lucich has made about $800,000 in improvements. But a quick glance around the courtyard reveals cracked windows, broken downspouts, a sagging walkway.

Inside the apartments, units appear to have the same problems that for years have been investigated by the city and county Housing Authority.

In the 19 years since Lucich bought the apartment complex, he has been cited and fined for egregious code enforcement violations—rats, mold, structural failures, leaking sewage, illegal construction and electrical failure, among others. For more than a decade, Lucich has managed to assuage the city and housing authority with perfunctory repairs. In an area that was patched up two years ago for water damage from leaking pipes, water droplets fall from overhead.

When Katherine moved into the tiny first-story apartment had new carpet and fresh paint. Though cockroaches scuttled over the floors and walls, she says, Lucich promised to take care of the infestation.

The exterminator never came, she says.

“Even on the day I moved in, there were a lot of roaches,” Katherine says with a shudder. “The first week, I couldn’t sleep because I thought if I slept the roaches would crawl all over my body.”

Katherine shows a cellphone video of a rodent skittering around her living room, darting into a pile of her son’s toys.

But her subsidized housing voucher covered the $1,445 monthly rent, so she kept her complaints to a minimum. Then, almost exactly a year ago, Katherine missed an appointment and lost her housing voucher, also referred to as Section 8.

A friend, Ly Huang, began paying her rent until she sorted out issues with her housing voucher. A month later, Lucich raised the rent to $1,550 with no notice, Huang says.

“When I was having Section 8, Mike was following the law,” Katherine says. “He didn’t raise the rent. … But as soon as I lost Section 8, he kept raising it, or kept trying to.”

In August, Lucich allegedly demanded another rent hike. But Huang, who owns another property and takes care of his aging parents, told the landlord that money was tight. Lucich accepted a check for $1,550, Huang says.

Meanwhile, Katherine says, the paint in the bathroom began to crack, peel and sprout with dark mold. The power would often go out. Moisture began to accumulate filth on the carpet, which Katherine says she couldn’t remove despite repeated shampooing.

Later that fall, according to Katherine and Huang, Lucich asked for $1,800—five times the legally allowable rent increase. That’s when Huang found out the apartment was subject to rent control. He says he confronted the landlord about his demands.

Through the city’s Rental Rights and Referral Program, Katherine and Lucich reached an agreement. Katherine would leave by June 10 and Lucich would get rid of the rats, fix the wiring and replace the bathroom ceiling, which had blackened with a ring of mold. 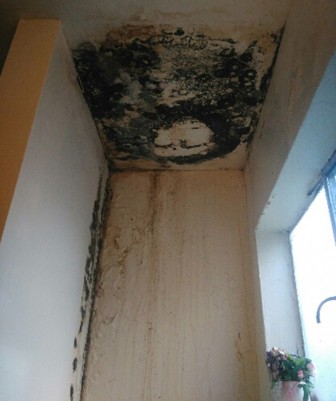 Under the contract, Lucich would start repairs on Feb. 28. According to Huang, he was a no-show. The months passed and the problems with mold, rats, roaches and power outages continued. In April, Huang took photos of the mold proliferation in the bathroom and showed city officials. Lucich hired someone to scrape off the mold and apply fresh paint in the bathroom.

On June 1, Huang wrote the final check for $1,550 and delivered it to Lucich’s salon in Palo Alto. The landlord returned the check and had his lawyer issue a three-day, pay-or-quit notice. He reportedly offered to let them stay if they signed a new lease for $1,900 a month.

Katherine refused, and Lucich filed an unlawful detainer claim against her and Huang—even though her friend never lived with her.

Lucich tells San Jose Inside that he never once raised the rent on Katherine and that she has only herself to blame for the eviction. In his view, he says, a lot of his tenants cause their own problems.

“Usually the ones that are on subsidies are the problem,” Lucich says. “They move in extra people inside that don’t belong there. You sign a contract with one person and they bring two or three more people inside. We try to correct the situation, but they don’t like to hear that. Basically, it’s difficult because the tenants could be difficult.”

Katherine never cooks in her unit because it’s unsafe, she says. There’s no grounding wire for the kitchen or the bathroom, Huang adds. The only smoke detector is in the bedroom—two rooms away from the kitchen.

When asked about the structural problems, such as the sagging walkway, shoddy stairs, holes in the walls and floors, Lucich again points to his tenants. Water damage that rotted out the walkway of the apartment, prompting city officials to red-tag one unit, was caused by a tenant, he says.

“He was pouring the water deliberately to the balcony … to create a bigger problem,” Lucich says. “He also had a pit bull, and I told him that can’t be there. But the balcony didn’t collapse—you’re using the wrong words. We had a balcony that needed repair because he poured gallons and gallons and gallons of water on it. He was about 260 pounds and would jump on the floor to break it. … He created a monster.”

Lucich also blames the black mold reportedly found in many units on tenants failing to open their windows.

“Sometimes they exaggerate about how bad it is,” he says. “Most of the time they don’t open the windows. Of course you close it when it’s cold, but if you don’t open it enough, the moisture builds up and creates mold. In my house, we try to open the windows in the bathroom to air it out.”

Lucich confirmed that he makes roughly $250,000 a year in rent revenue from the Rexford Way property. He says he spends about 15 percent on overhead—insurance, taxes, gardening, maintenance. The constant repairs make it a tough gig, he says.

“I’m a businessman,” he says. “I know sometimes you have to deal with these things.”

On Thursday, Katherine will appeal her eviction order in court.

“I don’t want anyone else to live like this,” she says. “I’m hopeful.”

Ly Huang points to the mold that’s starting to bloom again in the bathroom. (Photo by Jennifer Wadsworth)

An excerpt of Katherine’s arbitration agreement.

An excerpt of Katherine’s arbitration agreement.