We don’t know that the stolen car barreling down a residential street lined with grade schools contains two minors, one just 13 years old. All we know is what the radio tells us: a disturbance at a nearby Rotten Robbie; a records check of the license plate comes back stolen.

The Airbus EC120B positions itself above the corner of Story Road and Hopkins Drive on San Jose’s East Side, and a spotlight with a 1,000-foot stare washes the suspects’ vehicle like a well-placed interrogation room lamp. The light might as well have been green, as the high-speed chase begins.

We track the vehicle south and kill the spotlight to coax the driver into letting off the gas and avoid smacking into oncoming traffic. Four schools are located in the immediate vicinity. The driver seems unmoved, and the vehicle, presented with a “T” intersection at Ocala Avenue, clips a parked car before coming to a stop.

Two people hop out and book it while a third, 18-year-old Gianna Marlee, the only adult in the car, jumps into the driver’s seat and attempts to skirt the corner. She too will soon flee on foot, but only a 17-year-old male escapes police custody for longer than a minute.

A high-speed chase led to the Airbus EC120B circling the scene to locate the last suspect. (Photo by Josh Koehn)

For what seems like an eternity, we circle, and an infrared camera scans backyards and neighboring streets and we no longer bank left or right but pedal turn, which gives the unusual feeling of being held by the waist and hung over the side of a building as if money was owed. A few inches in front of my face I see several small white bags that have been placed in the back seat pocket in case I lose my nerve.

A perimeter forms and our work here—well, their work here—is done. We’ll later learn that the last suspect was found hiding in a residential trashcan.

The chances of seeing a high-speed chase on a ride-along is a “diamond in the rough,” according to my escorts, San Jose Police Department officers Charles Moggia and Andy Lacayo, who pilot the Airbus EC12OB. The 15-year-old, single-engine eye in the sky is considered the “Honda Civic or Fiat” of police helicopters, but it remains an especially helpful tool for a department that has lost hundreds of officers in recent years because of budget shortfalls and a pension reform war.

“When you have less officers on the street,” Lacayo says, “up here your backup is five minutes away.”

“This is not the only thing we do,” Moggia says, “but air pursuits on vehicle theft is one of the things we can often really help on.”

This opinion proves prophetic, as it was offered nearly 30 minutes before the Airbus EC12OB helped pull off the arrest “trifecta”—a term they use for air support, patrol and the canine unit all getting a bust in a single incident.

“It’s a coordination of all those pieces coming to work together,” Lacayo says.

Getting on board the Airbus EC12OB was its own adventure.

The 90-minute trip took months to arrange, mostly due to scheduling and maintenance issues, which included replacing the Airbus EC120B’s windshield after a bird’s ill-fated decision to play a losing game of chicken. The collision, felt while the Airbus EC120B was flying at a rate of 100 knots, left a substantial hole below the feet of the main pilot, who sits on the right side of the aircraft, and it nearly forced an emergency landing on Highway 101 in the middle of evening rush hour.

Thanks to some quick thinking by Moggia and Lacayo, which is just another way of saying they relied on their training, the aircraft was able to get back to Mineta San Jose International Airport without additional incident.

“The culture of aviation is to be even keel, logical and methodical,” Lacayo says. “You can’t get all jacked up.” 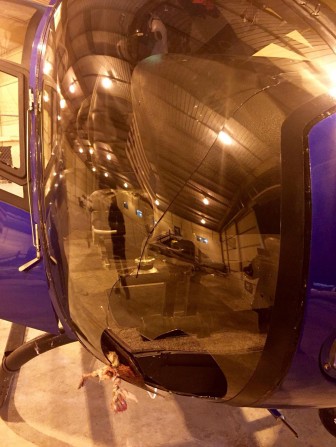 A bird smashed through the windhsield of the Airbus EC120B, leaving a hole and long crack. (Photo courtesy of SJPD)

Helicopter pilots might be mellow, but the same has never been said about Eddie Garcia, San Jose’s exuberant acting police chief. In recent months, Garcia has aggressively pursued getting me in the air, while also actively seeking to cultivate a relationship that on occasion has been oppositional.

Since last summer’s dispute over email records, Garcia has extended an olive branch. And he’s been texting me. A lot.

He still drops the word “bro,” drops wink faces at the end of jokes and uses exclamation points between breaths. He is nothing if not ebullient and persistent, but he’s now advanced to a position where all eyes are on him—and he seems to relish this fact. He’s been tasked with building up department morale and ranks, but he’s also put an emphasis on creating a more accessible relationship between media and police.

He’s been making the rounds since taking over this month, and, by all accounts, it’s a marketing push that seems to be working, as evidenced by this piece.

Nationally, the relationship between law enforcement and the public is undergoing a reconstruction, as a dialogue on issues such as use of force has deservedly received greater scrutiny. Issues of police abuse may not be as pronounced here in San Jose as they are elsewhere, but there remains an underlying tension as incidents crop up.

On a Monday night ride-along, the most confrontational moment—save for three young people endangering the lives of others—comes not in the form of protest but an airport cart driver who refuses to cede the right of way to the Airbus EC120B. We’ve just lifted off the ground and taken a hard right to the runway. The driver of the cart, which appears to be ferrying palettes of bottled water, is unmoved.

They let him pass and we begin to slowly move down the runway before elevating, as if upon an unseen escalator, and we head south until we’re directly above the City Hall rotunda. Go high enough in the air and everything seems peaceful. We maintain this course until we’ve reached the police substation near the 85-101 interchange, a building that is finally housing members of the department after remaining empty for several years.

SJPD’s Air Support Unit consists of four pilots, as well as Sergeant Chris Dominguez, who was doggedly considerate in arranging the ride-along. They operate on a schedule of three flights a day, with officers working shifts of four consecutive days on, three straight days off.

The officers all seem to enjoy their jobs, but it is just that—a job. The level of focus is exhausting, Moggia says, and it’s only been heightened as the Airbus EC120B routinely breaks down due to age and wear and tear. The mapping system on our flight, a source of several scheduling cancellations, was down once again.

“We’re pretty much doing it old school, where we have to use a map,” Moggia says.

The infrared camera system works—save for penetrating homes, water, glass or garbage cans—but it’s nearly a decade old, which can be best explained by comparing current technology to whatever cell phone was cutting edge in 2008. The razor? Save for a similar chopper operated by the Santa Clara County Sheriff’s Office, the South Bay has only two aircrafts to patrol the skies.

Regardless, the Airbus EC120B remains an effective piece of machinery. The evening is clear and the ride itself is smooth, which isn’t much of a concern to the pilots, who are more focused on visibility—what they can see and if others can see them.

“We can fly through quite a bit of weather,” Moggia says. “It all depends on visibility.”

While circling the end point of the high-speed chase, Lacayo notes that it would be much harder to conduct the aerial search by day, when Cessnas are flying in and out of Reed-Hillview Airport.

“To them we’re just another aircraft flying in weird circles,” he says.

Our journey nears its conclusion as we head over West Valley and then it comes into view: the Apple spaceship.

The steel ring remains just a frame, but there is something monolithic in seeing it from the sky. I almost hesitate to ask, my voice crackling through the radio. “Would it be OK to shine a light inside?”

A pause. “Well, they didn’t tell us we couldn’t,” says an officer, which one I’m not sure.

The inner sanctum of Apple’s under-construction headquarters comes into view and it’s as magical as you might suspect. We see cranes, caterpillars, dirt. It’s a typical worksite.

The truth is rarely as sexy as the unknown, but that doesn’t make it any less interesting.