Taking a shower may seem more like a routine than a privilege. But for people living on the streets, a safe place to wash is hard to find.

“If you’re homeless in Sunnyvale, there’s no place at all,” says Julie Lang, who works for the homeless nonprofit Downtown Streets Team. At least not year-round.

But that’s about to change. Next week, Peninsula-based nonprofit Dignity on Wheels will launch a mobile shower and laundry service for the homeless at Trinity Church of Sunnyvale.

The trailer equipped with showers, washers and dryers and private bathrooms will be the first of its kind in Santa Clara County. The first of many, Lang adds.

Similar efforts have rolled out elsewhere, including San Francisco, where a nonprofit called Lava Mae has converted defunct Muni buses into shower stalls for the homeless. 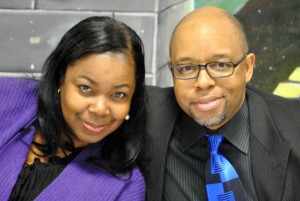 Dignity on Wheels began last year as an extension of the Project WeHOPE homeless shelter in Redwood City. The program’s success convinced Project WeHOPE’s husband-and-wife founders, Cheryl and Paul Bains, to expand southward with help from Trinity Church and the Downtown Streets Team.

Santa Clara County is home to 4,627 homeless people without shelter, according to a 2015 point-in-time homeless census. That’s a conservative estimate, officials say, but still one of the highest populations of unsheltered homeless in the nation.

Currently, only three locations in the entire county offer showers to the homeless, but limit them to certain days.

Lang, who helps find jobs and housing for her clients through Downtown Streets Team, says the lack of hygiene can be especially troubling for women. One of the homeless women she works with got slapped with a misdemeanor charge for pilfering tampons from a grocery store late one night.

“She was so desperate,” Lang says. “It was late at night. She couldn’t call a case manager. But that’s the situation people live with when they don’t have access to something as basic as a place to clean up”

Dignity on Wheels will provide up to 30 showers and 14 single loads of laundry a day with this one trailer. Organizers have put a call for donations of towels, toiletries, sandals and sweats.

“Something as simple as a hot shower and clean clothes can help restore hope and dignity,” says Greg Pensinger, who works with Lang for Downtown Streets Team.

County Supervisor Joe Simitian will speak at the project’s ribbon-cutting, which takes place at 10am Tuesday at Trinity Church, 477 Mathilda Ave., in Sunnyvale.