Epidemiologists are doing the dirty work.

As coronavirus infections skyrocket throughout the nation, scientists are studying the foul sludge coursing through thousands of miles of sewage pipes in Silicon Valley to identify outbreaks before they’re reflected in official case counts.

Recent analysis from that effort confirms what experts have been warning us about on a daily basis as the South Bay surpasses 50,000 cases—a milestone that brought Santa Clara County Public Health Officer Dr. Sara Cody to tears earlier this week. The present surge in Covid-19 infections is far more serious than the waves that prompted sweeping shutdowns this past spring and summer. And it’s about to get worse.

Because the virus can be found in human stool, even from people without symptoms, a team led by Stanford University has been regularly testing wastewater in San Jose, Santa Clara, Palo Alto, Sunnyvale and Gilroy to reveal local trends of disease spread.

What researchers determined is that as virus levels rose in the region’s wastewater, so too did the number of reported cases. The past month of sewage data shows a sharp uptick that tracks with diagnostic trends from nasal swab tests. 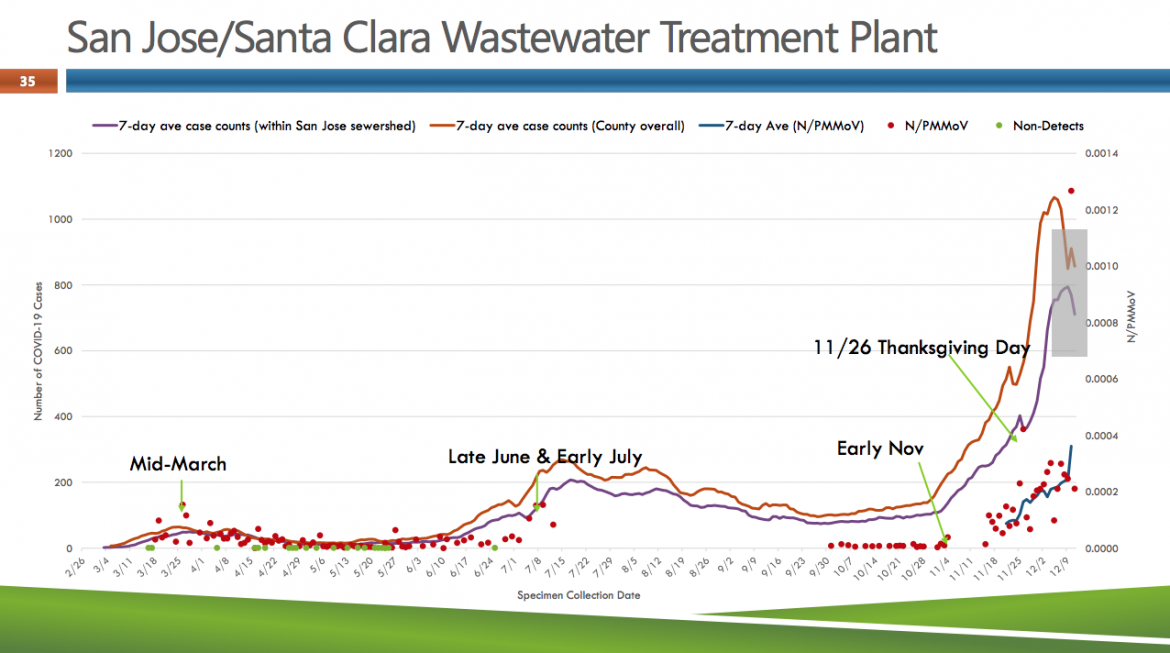 “It has taken off,” he told the five-member county board, “which again indicates widespread infections in the community.”

On Thanksgiving Day, researchers saw the highest levels to date—a trend that has continued its upward ascent in the weeks since.

“It continues to be a high, high, high level detected in wastewater,” Balliet said during his presentation, “which is very concerning because it’s orders of magnitude greater than where we were at—even in the June timeframe.”

Stanford’s wastewater analysis reflects a national trend of looking at sewage as a more comprehensive, cost-effective way of monitoring the virus.

On Nov. 27, the U.S. Departments of Health and Human Services and Centers for Disease Control (CDC) hired AquaVitas to run a study of up to 100 treatment plants in every state. The CDC is also calling on labs, treatment plants and local health departments to submit data as part of a national wastewater surveillance initiative.

“Wastewater-based epidemiology is not a new concept,” Balliet said, “but it is a concept that that has gained a lot of attention in the past nine months, for obvious reasons.”

Granted, there are limitations on the data, he noted, including the fact that the coronavirus rate of decay can make samples of stool less accurate over time. “Because it’s relatively new,” Balliet said, “procedures are evolving nationally.”

Even so, he added, “the data is really promising.”