It started as an effort to defend a 12-year-old Asian American girl who was called a racist slur by a random adult in Santa Clara Councilwoman Kathy Watanabe’s district. But the effort instead became a magnifying glass for City Council divisions, the councilwoman’s long-held habit of shunning perceived political foes—and now a call for her censure.

Watanabe worked with Mayor Lisa Gillmor and former Councilwoman Teresa O’Neill to organize the Wednesday anti-hate event in solidarity with Asian American and Pacific Islanders. Nearly a dozen speakers joined the forum to decry racism and call for unity.

Then, in the final moments of the rally, Watanabe denied the only Korean American on Santa Clara’s City Council, Kevin Park, a chance to speak—a move observers describe as a political misstep that shifted the focus of the event from unity to the city’s divided politics.

Assemblyman Alex Lee (D-San Jose), who spoke during the rally, says he watched as Watanabe scanned over the crowd to affirm she hadn’t missed any speakers. That’s when Park sidled up to the councilwoman to ask if he could “say a few words” before the one-hour event concluded.

“No, I’m sorry,” Watanabe said after a pause, video footage shows. “This is my event, so that’s OK. Thank you anyway.” Watanabe thanked Park for his support before turning her attention back to the crowd. But the damage was done, Lee said.

“Well, it is obviously pretty appalling and brazen,” Lee said in an interview with San Jose Inside. “But it's just completely antithetical to the whole idea the event itself raised about solidarity and allyship with the Asian American community. To very publicly and embarrassingly shut out an Asian American voice is pretty bad.”

Others in Silicon Valley agree with Lee, including the Asian Law Alliance, which is currently gathering signatures from leaders across the region to ask Watanabe to apologize and for the rest of the council to censure, or formally reprimand, the councilwoman.

“The thing that was most concerning to me is that within two weeks of that very tragic incident in Georgia, where six Asian American women were murdered—and four of those women were Korean American—to have that lack of sensitivity, to not allow the the newly elected Korean American council member to just say a few words,” Richard Konda executive director of the Asian law Alliance said in an interview. “If she and the mayor wanted to do a stop AAPI hate event, then they need to open their minds a little bit to really what it means and to deny Kevin Park the ability to say anything, it’s shocking.”

After the interaction, the crowd at the event seemed visibly surprised, according to Lee—who likened the experience to watching a car crash—and other bystanders who spoke to San Jose Inside.

Despite the overall surprise in the crowd, however, most of Watanabe’s council colleagues said they personally weren’t all that shocked by her response. They described the public rebuff as part of a longstanding pattern for the elected official, who has served on the council since 2016 and represents District 1.

“I was surprised, but not amazed,” Park said in an interview.

Four of Watanabe’s council colleagues told San Jose Inside that the councilwoman has spent years refusing meetings and giving them the silent treatment because—they believe—of their political differences.

“I have tolerated this enough,” Councilman Raj Chahal said. “When this is coming up in the open, I can't tolerate this behavior. I know I don't have control over this behavior, but ... it has to be brought forward to the community.”

Chahal said he felt iced out by Watanabe for about two years after being elected in 2018. He along with Park, Becker and Councilman Suds Jain said that beyond the dais, Watanabe generally does not speak to them, even to say hello—or to coordinate functions like the AAPI event.

Watanabe did not respond to a request for comment about the complaints of her ignoring people. She also did not say why she opted not to include any of the three Santa Clara council members of Asian descent in the Wednesday event.

She did, however, say in a statement to San Jose Inside that she declined Park’s request to speak because time was limited and he wasn’t invited to speak beforehand.

“This was not a city-sanctioned event,” she explained. “I paid for the permit and had to use [the] free speech area like any other resident. It truly was my event to address an incident that happened in District 1 but use the opportunity for our government leaders [to] weigh in too.” 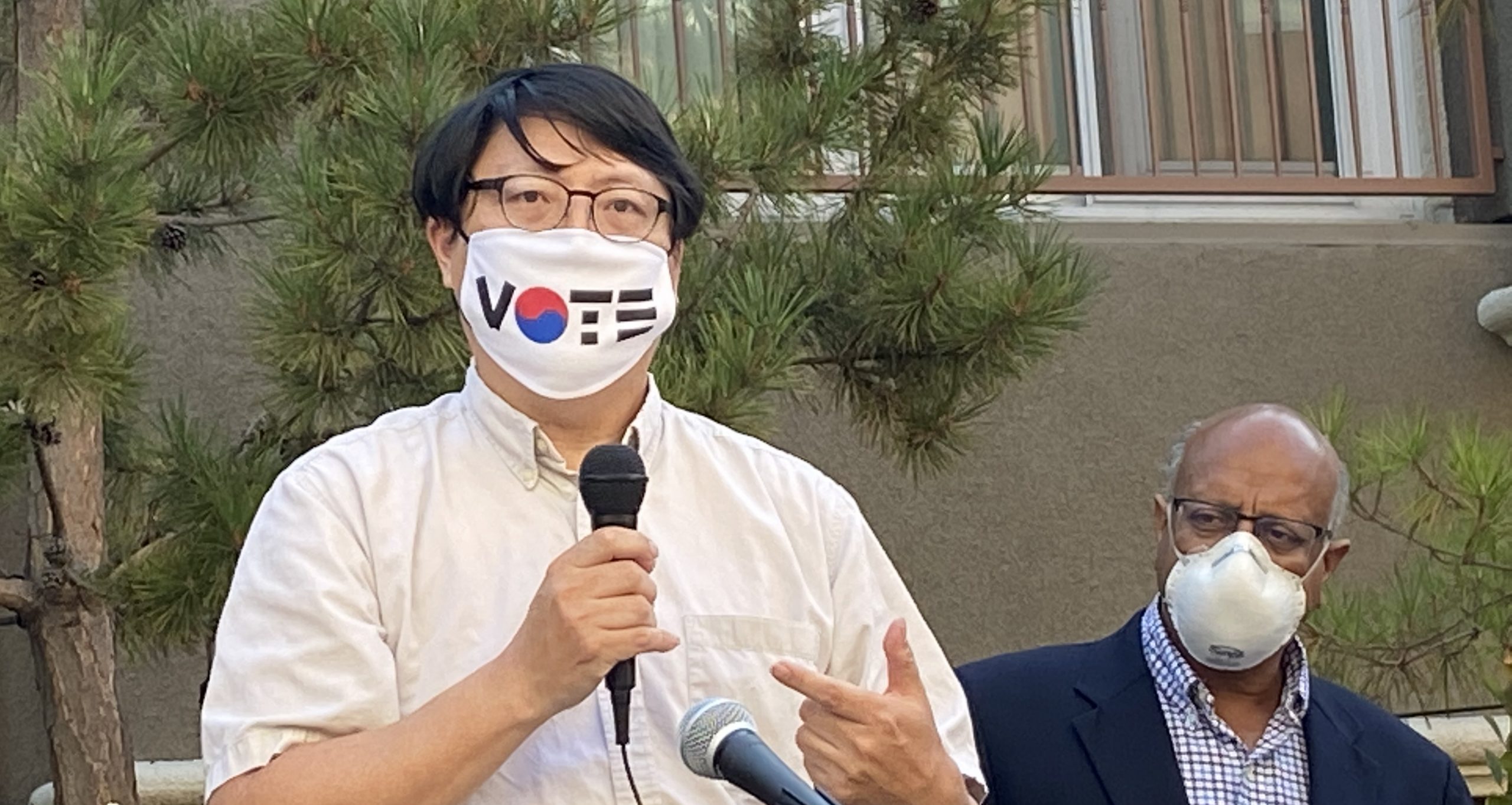 Kevin Park speaks at a press conference this year. Suds Jain stands behind him. Both were elected to sit on Santa Clara's City Council. (Photo by Janice Bitters)

But all four council members said the issues that came to a public head Wednesday go beyond one event.

Each described instances in which they said “hello” or “goodbye” to Watanabe, only to be ignored—on multiple occasions. In other instances, the council members said that in group settings often Watanabe makes a deliberate effort to greet everyone except them. Some described instances in which Watanabe turned her back on them or acted as though they were not in the room, despite sometimes being part of the same group conversation.

At least two of the council members said they’ve attempted to set up meetings with Watanabe to mend the apparent strain on their professional relationship or talk about other issues, but Watanabe has either ignored those requests or declined to meet. Emails and text messages reviewed by San Jose Inside seem to corroborate such accounts.

Jain said Watanabe declined to meet with him as far back as 2018. The two ran against each other for the council in 2016, but more than a year later he asked to meet with Watanabe to talk about planned development and the San Francisco 49ers, which manages Levi’s Stadium with the city.

After a lengthy back-and-forth about times and dates the two could meet in the coming months, Watanabe relayed that she was too busy and declined to meet. Communication hasn’t improved since, Jain said.

“At that point, we were at-large [for City Council representation], so it was not that I wasn’t her constituent,” he said. “That's just kind of how she operates.”

That is why, when Jain got the invitation at about 3:30pm Tuesday to attend Watanabe’s next-day AAPI anti-hate event, he was not surprised that none of the Asian American council members were asked to speak.

“I had gotten an email … just inviting me to the event, but it was pretty clear to me that I was not being asked to speak,” he said. “I had prepared a little speech just in case, but I really had zero expectation that I would be asked to give it.”

“We had a lot of Asian people and people of color speaking, but I thought that it would also be a good look for the city of Santa Clara—at a city of a Santa Clara event—to have an Asian Pacific Islander member of the City Council also just say a few words,” Park said. “It wasn't supposed to be politically charged.”

‘No Worse or Better’

The incident comes at the end of a years-long battle between Santa Clara city officials and a slew of minority groups, including the Asian Law Alliance, over whether the city’s long-standing voting process diluted minority votes.

In 2018, Santa Clara County Superior Court Judge Thomas Kuhnle ruled that holding elections with six districts, rather than having every resident vote on every council member, would even the playing field for minority voters.

The city appealed the decision, a move a majority of Santa Clara council members at the time supported. Today, however, the only elected officials remaining on the council who supported the appeal are Watanabe and Gillmor.

Santa Clara has held the last two elections—in 2018 and 2020—with six districts. And in that time, three Asian Americans won seats on the council, breaking a long streak of nearly all-white representatives in Santa Clara. Watanabe also won re-election in 2020.

Even so, the elections disrupted the power dynamics of the council, shrinking what was once a reliable four-person majority that included Watanabe and Gillmor. Since the 2020 election, Watanabe and Gillmor have found themselves on the losing end of several 5-2 votes.

In December, three California Appeals Court Judges unanimously agreed with Judge Kuhnle, leaving Santa Clara in the same place it was after the 2018 ruling, but a bit poorer as the groups who sued the city recouped millions of dollars in legal fees. The deadline to challenge the appellate ruling has since passed, though city officials are staying quiet about what comes next in the matter as negotiations continue.

In the meantime, the four council members reportedly snubbed by Watanabe over the years say they don’t expect much to change in council relations as they forge ahead.

“It doesn't really change the dynamics of the council to me,” Park said. “I don't feel any worse or better because this happened, this is just a validation of what I thought would happen anyway—though I’m a little surprised on how coarse it came out.”

Watch the full video of the rally, live streamed by River of Life Christian Church, below. Skip to the 1:02:40 mark to see Watanabe's reaction to Park's request to speak.