After blasting his colleagues for interrupting city business for international travel, San Jose Mayor Sam Liccardo found himself having to abstain from a Seattle trip to hold himself to the same standard.

That is, until the trip’s sponsors gave him an out.

Back in April, Liccardo publicly rebuked five of his fellow council members for taking a Sister City trip to Okayama, Japan, forcing a neighborhood services subcommittee to cancel for lack of a quorum. The mayor risked putting his elected colleagues in a similar predicament next month by joining four other councilors as part of a business delegation to Seattle, Washington, and considered dropping out to avoid causing the fast-moving wheels of city business to grind to a halt.

But the Silicon Valley Organization, or SVO—the South Bay’s business chamber of commerce—wasn’t having it.

The group had marketed Liccardo’s participation to Seattle officials and attendees, and planned to have him deliver the keynote and a question-and-answer session on the first day of the early October excursion. “They expressed concern that my absence would create a last-minute hole in their program,” Liccardo said.

With San Jose anticipating a new Google headquarters in downtown, SVO also hoped the mayor would glean insight from Seattle’s experience with Amazon.

So the SVO had Vice Mayor Magdalena Carrasco take the hit.

On Thursday, SVO apparatchik Eddie Truong called Carrasco’s District 5 office to break the news, telling the policy aide on the other line that a Beyoncé and Jay-Z concert forced the hotel to un-book a bunch of guests—the vice mayor being one of them.

SVO President Matt Mahood reportedly cited a different reason to Carrasco, saying the study trip was already sold out because there was so much interest this year.

Another answer came later in the day when someone from SVO told a city staffer that Carrasco being uninvited had more to do with leaving enough folks for a quorum at the Oct. 3 Rules and Open Government Committee meeting so Liccardo could take the Seattle trip without appearing inconsistent.

Truong and Mahood didn’t respond to requests for comment. In an email to San Jose Inside, SVO spokeswoman Mayra Flores De Marcotte echoed what Carrasco and her staff heard from Mahood on Thursday.

“We are thrilled to share that interest in this year's study mission trip to Seattle exceeded expectations,” she wrote. “In fact, we were over capacity. We are disappointed that Vice Mayor Carrasco will not be able to join us as a result. We had to turn several people away once we reached capacity.”

Except that Carrasco signed up way ahead of time. She recalls speaking with organizers about a month ago and submitted her travel request on Aug. 22—a day before anyone else on the council and more than a week before Liccardo did. That said, it’s unclear why the SVO waited until this week to bump her from the roster. 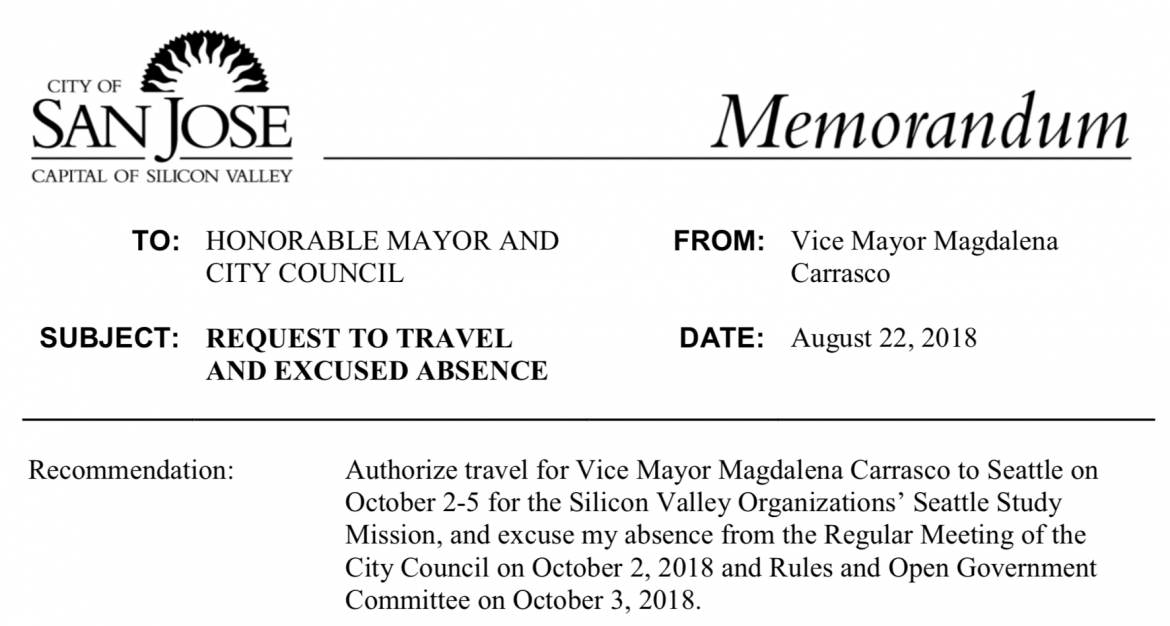 Now, with the vice mayor out, the Oct. 3 through 5 study trip will include Liccardo, his fellow business-aligned councilors Dev Davis and Johnny Khamis as well as labor-backed Councilman Sergio Jimenez.

“When they informed me that there would not be a quorum problem, I agreed to attend,” the mayor said, calling it a straightforward, “binary decision.”

The way Liccardo broached the issue about the Sister City trip earlier this year rubbed several folks the wrong way, which put his own out-of-town absences under the microscope and made subsequent conversations about travel policy more fraught.

Councilman Raul Peralez said he sensed that tension when the travel policy came up at a Rules meeting a few weeks ago, and that the mayor raised some eyebrows by asking to defer talks about travel policy and an upcoming Sister City trip to Dublin, Ireland, but not the SVO jaunt. “It was very interesting,” said Peralez, who was one of the five councilors in Japan when the mayor lambasted the Okayama delegation. “There was a lot of hypocrisy in what I saw happened.”

The downtown councilman penned a memo earlier this week to point out what he saw as a matter of fairness—why make an exception for the SVO trip and not the Sister City travels to Dublin? “If the intent was to have an open discussion about updating our city council travel policy, then it is only fair and transparent to defer this item until that discussion occurs,” Peralez noted in the Sept. 10 memo.

Discussions about Dublin, Seattle and the overall travel policy wound up getting deferred to the same meeting anyway, Liccardo said, noting that he didn’t intend to single out the SVO trip. “If I did, that was inadvertent,” he clarified.

Peralez said he made a point of being courteous by not from naming names in his memo, but wanted to remind Liccardo that he was the one who stirred the discussion about city travel and how it affects quorums in the first place. “The mayor is well aware of what the optics look like,” Peralez said, “and he recognizes that he is the initiator of this conversation. So if he’s not taking his own advice, then certainly it’s hypocritical.”

The SVO made sure the mayor wouldn’t have to worry about that for this next trip.

Liccardo also dismissed the broader criticism of the frequency and purpose of his own travels as disingenuous. “I think there have been assertions by some about a double standard here, but there is a double standard articulated in the city charter,” he explained. “I have a different role.”

Further, he added, one of his chief contentions with the Sister City trip in April was the cost to taxpayers and the fact that a lot of the councilors brought along policy aides. “That animated my concern about the trip,” Liccardo said.

The mayor stressed that it’s also important to distinguish between privately funded business or policy delegations like the ones he takes to Washington D.C. and diplomatic Sister City-type junkets on the taxpayer’s dime. Regardless, he said he would like the conversation this week to help the city come up with a better policy.

That would certainly help avoid the awkwardness of uninviting people like Carrasco, who said she’s none too pleased with the way things panned out with Seattle.

“I had hoped this trip would be an opportunity to learn about corporate citizenship and how the impact of companies’ expansion can benefit communities like mine on the East Side of San Jose,” she told San Jose Inside, which has also purchased a ticket and will join the Seattle delegation.

“Hopefully on the next trip Beyoncé will share her room with me,” Carrasco said.