In the end, the 20-year-old was convicted as a predator but sentenced as a swimmer. Probation recommended a year in prison. State guidelines called for at least two—14 at most. Judge Aaron Persky gave him six months in jail, with a shot at getting out in three.

“A prison sentence would have a severe impact on him,” Persky reasoned in court earlier this month. “I think he will not be a danger to others.”

The leniency of the punishment—rare in an age of mass incarceration—and that it favored an athlete already privileged by affluence and whiteness sparked public protest. The victim’s searing courtroom account of the January 2015 assault fanned the flame into moral outrage.

Those thousands of words, which pulled millions of people into her pain with their vivid detail, went insanely viral. Those words flipped the narrative. In the court of public opinion, if not in Judge Persky’s chambers, justice was not served.

As if to complete Turner’s rebranding from champion swimmer to rapist, police released two mugshots after his June 3 sentencing, one taken the morning of his initial arrest and the other during his recent booking. Newspapers and TV stations swapped school photos of a clean-scrubbed and smiling all-American athlete with the watery-eyed deer-in-the-headlights mug shots of a perpetrator caught in the act. 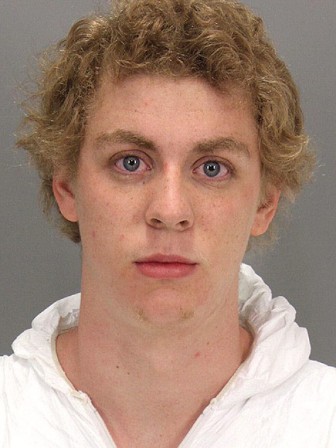 During the trial, Emily Doe defended her reputation while Turner talked up his potential, his Olympic aspirations, and blamed what his dad glibly called “20 minutes of action” on drinking and promiscuity.

The public directed their anger not only toward Turner but Judge Persky, a former prosecutor appointed to the bench in 2003 by Gov. Gray Davis.

On Monday, a juror in the case told the Palo Alto Weekly the outcome “makes a mockery of the whole trial” and that the judge should be ashamed for going easy on Turner. That same day, the District Attorney’s Office successfully filed a motion to remove Persky from an upcoming trial for a male nurse accused of sexually violating an unconscious patient.

Meanwhile, as the judge coasts to perfunctory re-election this November for lack of a challenger, he faces a petition for his recall that’s racked up more than a million signatures. Several state legislators have joined the cry to oust him over “prejudicial misconduct.”

“Judicial rulings like Judge Persky’s … discourage the reporting of these devastating crimes by reinforcing the fear that justice will not be served,” reads a letter to the California Commission on Judicial Performance signed by 13 state Assembly members. “[T]hey demonstrate that there are two systems of justice: one for people of privilege such as elite athletes, and one for everyone else.”

Salient points. But the growing demand to right this wrong raises important questions that have been reverberating throughout the legal community and at Stanford, where the conversation about campus sexual assault has reached a fevered pitch.

Does justice equal more punishment? Should a judge lose his or her job over an unpopular ruling? What effect would that have on other jurists, many of whom face the political pressures that come with elected office? Would a recall undermine the constitutional provision for judicial independence? How can victims and their advocates channel the intense interest in the Stanford case to teach people about sexual consent? What about cases in which the victim is something other than a cisgender woman? What about cases with several more shades of gray?

At Turner’s alma mater, where the U.S. Department of Education tallied 26 reported rapes in 2014, a group of victims launched an online petition for the school to publish the names of students found guilty of sexual assault. The campaign has drawn backlash, however, including from other victims. Erika Lynn Kreeger, a 23-year-old rape survivor and trans student at Stanford, has been trying to foster a more nuanced dialogue about sexual crime, punishment and consent among peers.

“I’m very deeply horrified by what Brock Turner did,” the earth science major tells San Jose Inside. “But I’ve been very disturbed by how people are talking about this in ways that absolve everyone else from blame. We’re further entrenching this idea that some of us are incapable of harm and others are scum of the earth who do these horrible things and need to be locked up. In reality, the vast majority of us live somewhere in between. There’s this idea that someone’s a rapist because they rape instead of seeing them as a product of this culture of non-consent that implicates all of us.”

The reality of sexual assault, of course, is vastly more complicated than the dichotomy of ruthless predator and defenseless victim. Rather than focusing on a limiting term such as “rape culture,” Kreeger wants to explore the broader idea of non-consent and how it teaches people that their identity privileges them to other people’s bodies.

“[W]e are taught that … white people can touch black and brown women’s hair without permission,” Kreeger and fellow Stanford scholar Lily Zheng wrote in an op-ed for The Stanford Political Journal. “[T]hat cisgender people can bluntly ask transgender, gender-variant and intersex people about their genitalia; that men are always entitled to women’s/femme’s/non-binary folx’s [sic] energy, emotional labor and bodies.”

In the absence of education about consent and communicative sex, they argue, latent entitlement can morph into unwanted advances or assault. Accounts that have surfaced after Turner’s sentencing shed light on his upbringing in an affluent Ohio suburb, where families expect academic and athletic excellence but hesitate to tell their children “no.”

At Stanford, there’s a century-old tradition called “Full Moon on the Quad” in which hundreds of freshmen engage in a liquored-up free-for-all make-out session. Last year, Turner’s swim team tied new guys up with rope and wouldn’t release them until they swapped spit with a stranger. It’s a small thing and doesn’t absolve Turner of guilt, Kreeger says, but it illustrates the type of cultures that shaped him, the context that may have emboldened his sense of entitlement to his victim’s body.

Systemic neglect of sexual assault victims has turned the Stanford rape case into a flashpoint that may portend a shift in public attitudes. The 23-year-old victim—known anonymously as Emily Doe—told a probation officer that she didn’t want her attacker to “rot away in prison,” but she hoped for more than a “soft timeout” in a local jail.

Though District Attorney Jeff Rosen decried the light sentence, saying the punishment did not fit the crime, he said it should not cost Judge Persky his job. The Santa Clara County Bar Association echoed that sentiment. “Judges have a duty to apply the law to the facts and evidence before them, regardless of public opinion or political pressure,” the association of lawyers declared last week. “In that role, judges provide an important check against other political forces.”

Public Defender Molly O’Neal—reportedly a vocal feminist with a college-aged daughter—joined them in Persky’s defense. The verdict that confirmed Turner’s guilt and rendered him a cautionary figure, she says, has already vindicated Emily Doe.

Not many would agree. Restorative justice, at least to Kreeger, should err in favor of the ones wronged. For now it seems that more vindication in this case came outside the courtroom, in Emily Doe’s eloquent words that voiced the plight of other victims.