If George Shirakawa Jr. receives community service instead of jail time as punishment for his felony mail fraud, he can thank a judge with whom he’s shared a political relationship for more than a decade.

Ron M. Del Pozzo, a Santa Clara County Superior Court judge for the last 12 years, surprised the District Attorney's office with a remarkably generous offer to Shirakawa’s attorneys in closed chambers Monday afternoon, just a day into the resumption of a trial that spans back to June 2013. What the judge did not say behind closed doors, or in court at any point in the trial, is that he counted San Jose’s then-vice mayor among his key endorsements in 2002, when he won his first election to the bench. An archive of Del Pozzo’s campaign website listed Shirakawa at the top of the list of city officials supporting his candidacy.

Del Pozzo also did not disclose in court that he received the support of a key witness in the trial, Assemblymember Nora Campos (D-San Jose), who, prosecutors claim, financed Shirakawa’s theft of a council election on her little brother’s behalf. Assemblywoman Campos sent Shirakawa $5,000 as Xavier Campos was locked in a tight San Jose City Council contest against Magdalena Carrasco.

To muddle matters further, Del Pozzo also neglected to disclose that his wife, Corina, who served as his campaign treasurer in three election campaigns, donated $250 to Shirakawa’s 2008 county supervisor campaign. During that campaign, the defendant funnelled $130,000 into a secret slush fund. Shirakawa pleaded guilty to five felonies and seven misdemeanors in 2013 for the misappropriation of funds, which were considered separate from his recent case.

John Chase, the deputy district attorney who oversaw the prosecution’s case, says he was unaware of Del Pozzo’s familiarity with the defendant and witnesses. “He definitely did not say he had a potential conflict of interest,” Chase confirms.

When Del Pozzo walked into court Monday morning, before the trial was set to begin, he jovially greeted Shirakawa from afar by announcing there was “a celebrity” in the gallery. Moments later, Del Pozzo could be heard sharing pleasantries with Gregory Ward, a former judge who was present as Xavier Campos’ attorney and who hoped to quash the District Attorney’s subpoena to compel Campos to testify. Ward and Del Pozzo shared a few laughs, and the latter mentioned that they should grab lunch in the near future.

Together, the defense and prosecution filed hundreds of pages of briefs and motions Monday morning, suggesting neither had any intention other than proceeding with a trial expected to last several weeks. But when attorneys returned in the afternoon, Del Pozzo offered the defense a deal that would allow Shirakawa to avoid jail time and a guilty plea. There was no such offer being made by prosecutors, says Chase.

The California Code of Judicial Ethics has strict rules on how judges can give and receive campaign contributions, and it appears Del Pozzo did not cross any lines that would disqualify him from hearing the case. (As of press time San Jose Inside could not locate Del Pozzo’s 2002 campaign disclosure forms. The Registrar of Voters destroys such records in print form after seven years.) But disclosing a conflict of interest, real or perceived, is often considered standard practice. As an example, Judge Philip Pennypacker recused himself from both of Shirakawa’s trials in late 2013 after it was learned that he had ex-parte communications with one of the defense’s attorneys.

Victoria Henley, director-chief counsel for the California Commission on Judicial Performance, would not comment on Shirakawa’s trial, but she did talk about the responsibility that lies with all judges. “The disclosure requirement is that you’re supposed to disclose anything that a reasonable person would consider a conflict of interest,” Henley says.

Del Pozzo’s political involvement extends beyond Shirakawa and the Camposes to a broad swath of the South Bay’s progressive/labor wing of the Democratic Party. The judge and his wife, neither of whom returned calls for comment, have contributed money to organizations such as the South Bay Labor Council and Democratic Central Committee, as well as to the campaigns of Cindy Chavez. Before replacing Shirakawa as county supervisor, Chavez attempted to talk District Attorney Jeff Rosen out of prosecuting Shirakawa, a longtime political ally. 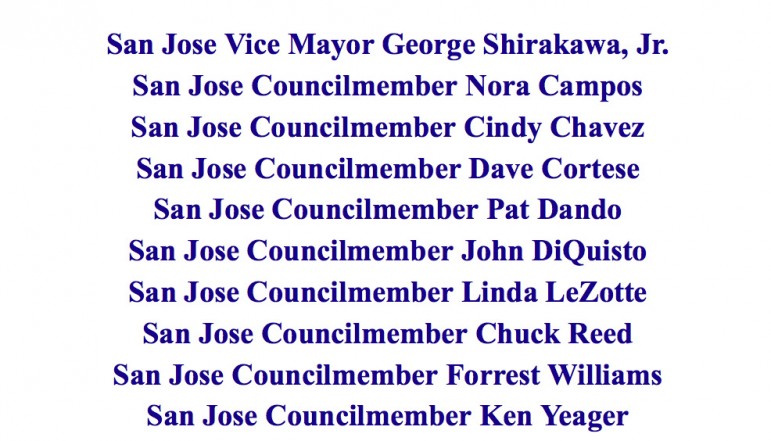 This list of elected officials endorsing Ron M. Del Pozzo was found in an archived page of the judge's 2002 campaign website.

Chase, who did not take issue with the ruling, says he was unaware of any connection between Judge Del Pozzo, Shirakawa and the defendant’s circle of friends. “If I were the judge, maybe I would say something about it,” he says.

The evidence presented against Shirakawa mounted after motions and briefs were filed Monday. A letter the defendant sent from jail last year to Linda Delgado, a longtime girlfriend who also worked as Xavier Campos’ 2010 campaign treasurer, suggested that Shirakawa was still attempting to pull strings from behind bars.

Shirakawa asked Delgado to contact the Camposes, as well as Neil Struthers, Nora’s husband and a former construction and trades council boss. Shirakawa wanted them to help Maya Esparza, his cousin, in her San Jose council race.

“I need you to do a favor for me, I don’t want to talk on the phone,” Shirakawa wrote. “Can you please call Neil (phone number redacted) & Xavier and tell them I need them and Nora to help Maya. I’m really pissed! Tell them I don’t care about politics or if they don’t like her. I’m personally asking … OK … Do it as soon as you get this OK please.”

He added as a postscript, “Tell Xavier I’m really upset!!!” 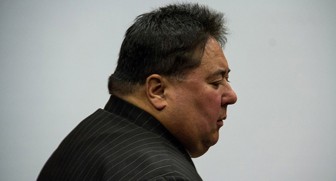 In a trial brief, Chase suggested that Shirakawa didn’t want to talk by phone “likely because every jail telephone call begins with a warning that calls are subject to monitoring and recording.” He added that a $5,000 check Nora Campos wrote to Shirakawa in 2010, just weeks after the fraudulent mailer was sent, could be seen as a payoff.

“The fact that the defendant believed he could demand help from these three individuals shows how close he was to them and further reinforces that he had a motive to commit this crime to help Xavier Campos finish first in the primary,” Chase wrote.

During a search of Shirakawa’s home on the eve of Thanksgiving 2013, investigators found in his bedroom “printed maps to Magdalena Carrasco’s home and to the home of her parents, as well as Google Street View photographs of those homes.”

Additionally, Chase said, investigators found “a political postcard featuring images of the same flag of communist Vietnam” that appeared in the political mailers.

Del Pozzo’s decision to end the trial by allowing a no contest plea could prevent more information about who was involved from coming to light. This also does not address the exorbitant cost to taxpayers in prosecuting and representing Shirakawa.

According to the Indigent Defense Counsel Office, which pays legal bills for those who cannot afford representation, Shirakawa’s attorney fees at last count totaled $98,392. That figure will likely go to six digits once final billing is tabulated.