A San Jose policeman died in a motorcycle crash Tuesday while on patrol in north San Jose, officials said.

Eleven-year San Jose Police Department veteran Michael Katherman, a 34-year-old San Benito County resident, became the 13th officer in the city’s history to die in the line of duty. Last year, Officer Michael Johnson became the 12th when a suicidal gunman shot him to death during a standoff.

Today we lost a brother officer. Our thoughts and prayers go out to Michael's family and friends. Rest in peace Officer Katherman.

“It’s with great sadness that I inform you all that this community has lost an officer in the line of duty,” SJPD Chief Eddie Garcia told reporters outside the police station Tuesday night. Katherman, in full uniform, was riding his police motorcycle northbound on North 10th Street when a silver minivan heading the opposite way struck him while making a left onto Horning Street. 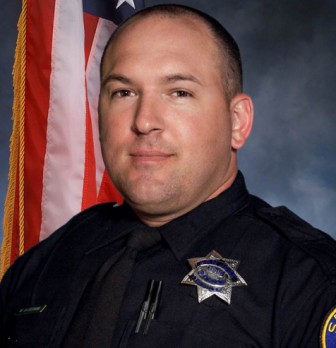 A bystander ran to Katherman’s side and used the police radio to call for help, according to SJPD Chief Eddie Garcia.

Paramedics showed up minutes later and rushed the wounded officer to the nearest hospital, San Jose Regional Medical Center, where he died a short time later.

The man driving the minivan stayed at the scene and cooperated with investigators. Drugs and alcohol don’t appear to have played a role the collision, which took place in an industrial part of San Jose.

Katherman left behind a wife and two school-aged children.

“He put his uniform on, left to go to work and wanted to see his family when he got off,” Garcia said. “And he didn’t make it.”

When Mayor Sam Liccardo heard the news, he called off the rest of Tuesday’s City Council meeting.

Just last month, Katherman was one of two San Jose motorcycle cops to ride in the Police Unity Tour, a procession from Newark, New Jersey, to the National Police Memorial in Washington D.C. to honor fallen officers and their surviving families. The tour ended with a candlelight vigil.

Below is a video Katherman put together after the trip.

Police urge anyone with information about the crash to call detective Kelvin Pham, who works in the agency’s Traffic Investigation Unit, at 408.277.4654. To call anonymously, dial the Crime Stoppers tip line at 408.947.7867.