Stephanie Sakamoto grew up in Japantown, the tight-knit multicultural community just north of downtown San Jose. But she never felt the need to patrol the streets to keep her community safe—until now.

“My family members were generally very cautious,” Sakamoto says. “Those feelings of caution and apprehension have grown.”

The patrols come amid an apparent rise in crimes against Asian American residents across the U.S. At least two elderly Asian men were killed this year in the Bay Area by strangers on the street. In the tunnel beneath Diridon Station in San Jose, a man attacked a woman, yelling “F*ck you, Asians” as she screamed.

Sal Moreno began volunteering for Japantown Prepared this month. He usually accompanies seniors to and from nearby food distribution centers, or to and from the senior apartments at Fuji Towers on Taylor Street. He says racism against Asians and other racial and ethnic minorities became more blatant during President Donald Trump’s time in office.

“Racism was there, but now it's out in the open," Moreno says 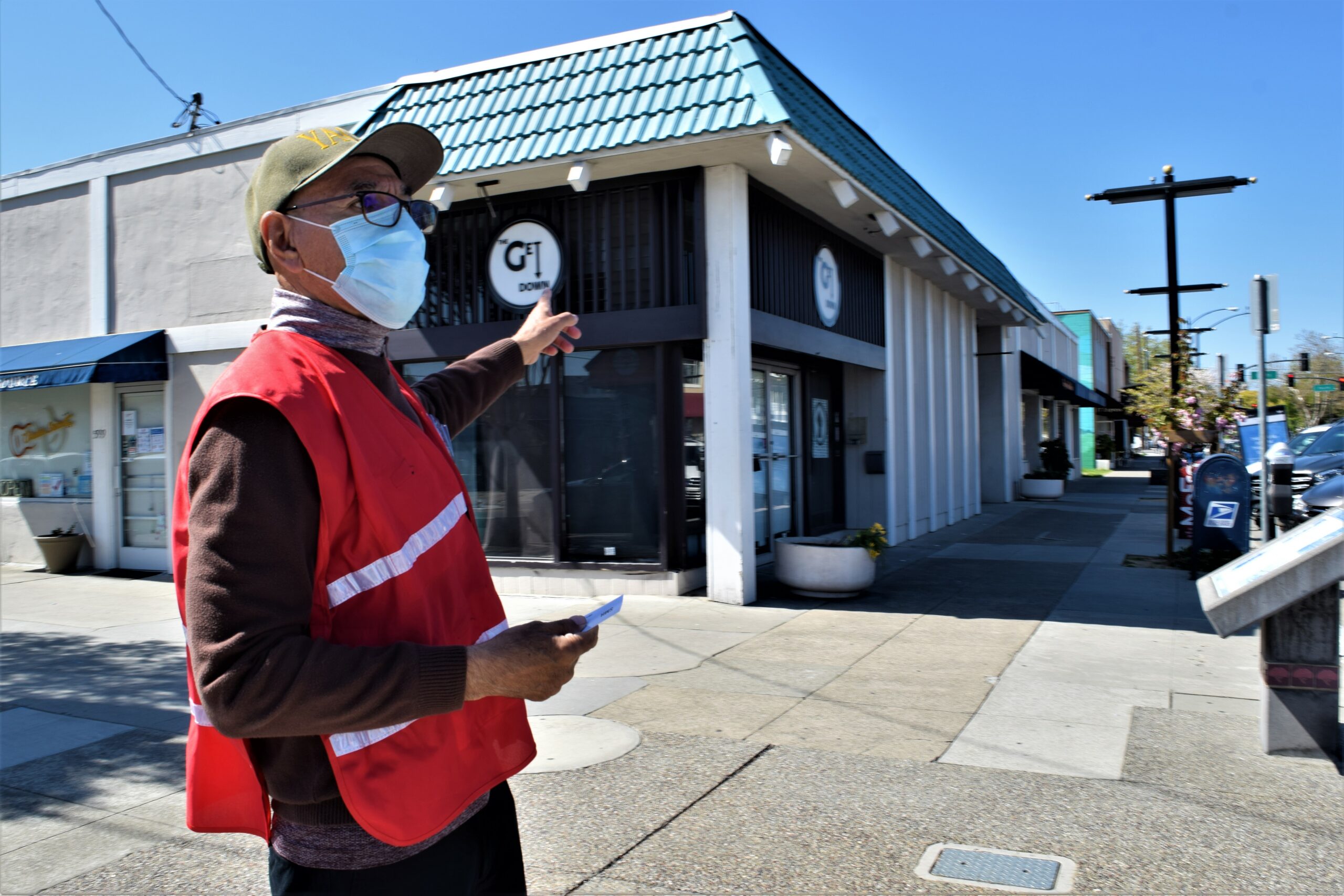 Sal Moreno, a volunteer with Japantown Prepared, observes the corner of Fifth and Jackson Streets in Japantown. (Photo by Sonya Herrera)

The volunteer says seniors are wary of his presence, despite his red vest and a few requested that he and other volunteers wear name tags so they can be identified. “We're learning as we go,” Moreno says.

Jasmine Rast is the owner of Roy’s Station, a popular coffee shop located on Fifth and Jackson streets. Her grandfather, Roy, ran the shop when it was still a neighborhood gas station and he would lament the racism the family faced, she says.

Though Rast and her family are well-acquainted with racism, it wasn’t always as loud and overt as it’s been lately, she says. She is encouraged that more than 200 people signed up to volunteer for the Japantown Prepared foot patrols.

“It was very quiet, and all of a sudden, it's in your face,” Rast says. She attributes the rise of both petty crimes and overt racism to the Covid-19 pandemic.

“It's just a really hard time right now, and people are really angry,” Rast says. “This might be the thing to attach to.” 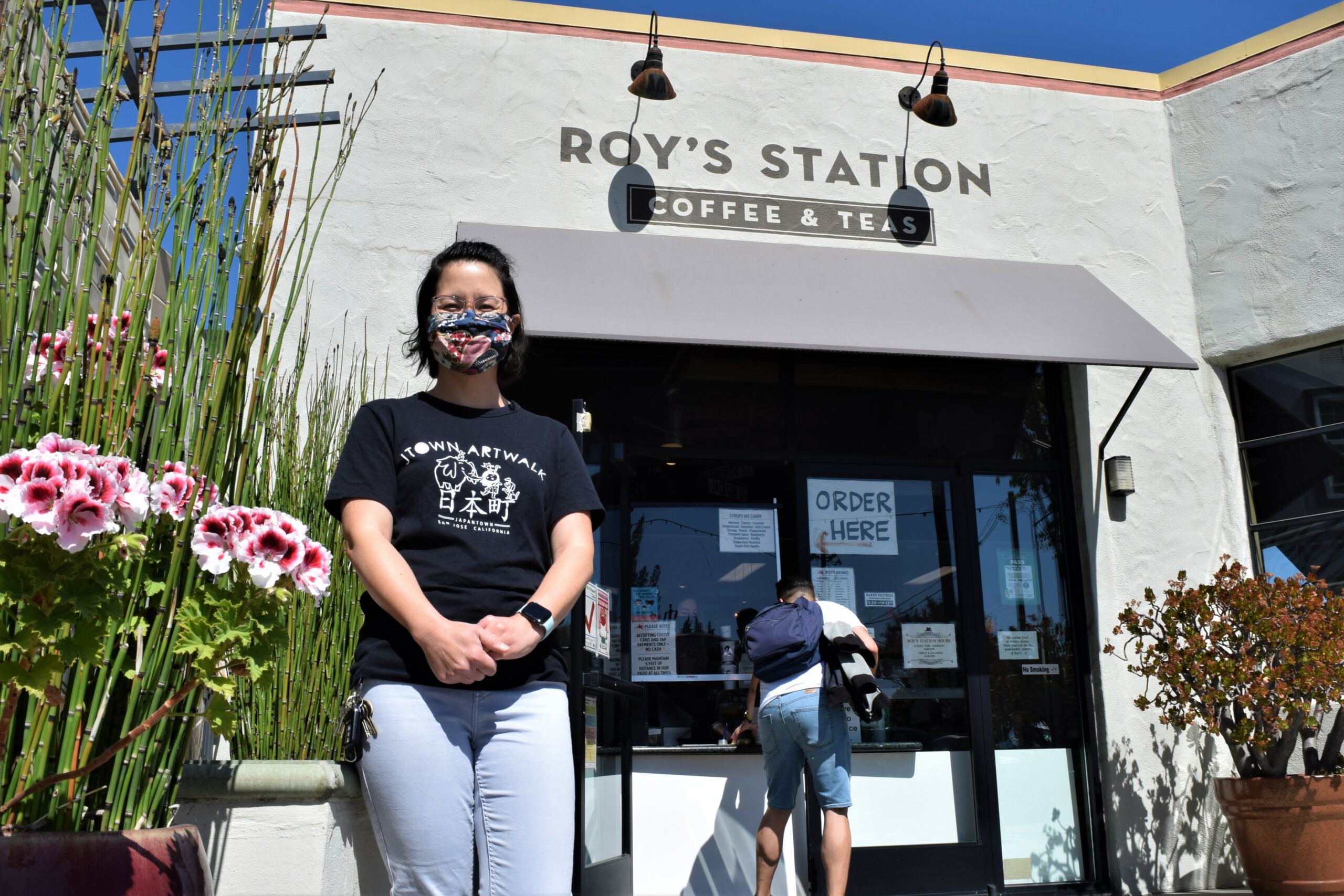 Jasmine Rast, owner of Roy's Station coffee shop in Japantown, said the pandemic has triggered a rise in petty crimes and overt anti-Asian racism. (Photo by Sonya Herrera)

San Jose crime data show an uptick in vehicle theft, burglary, aggravated assault and homicide this year compared to the same time period in 2020. In Japantown, at least six vehicles have been stolen this year, with most of those on Taylor Street. At least 12 burglaries were reported in the area this year so far, including three vehicle burglaries.

But other crimes were symbolic. The monument to first-generation Japanese-Americans, or Issei, on Fifth and Jackson streets was spray-painted on Feb. 9, though it has since been repaired.

Standing outside his store and gazing into the street, Santo says society has come a long way from when his father and father’s uncle ran the store.

“They had to deal with being sent to camps,” Santo says, referring to President Franklin D. Roosevelt’s detention order for Japanese Americans during World War II. “They gave a lot of their kids English names... they all had American names to try to assimilate into the community and society."

Like other Japantown residents, Santo says that racism may not have increased; it’s simply become more visible.

“I hate that this coronavirus brought it to the forefront," Santo says. “People who didn’t see it before can see it now.” 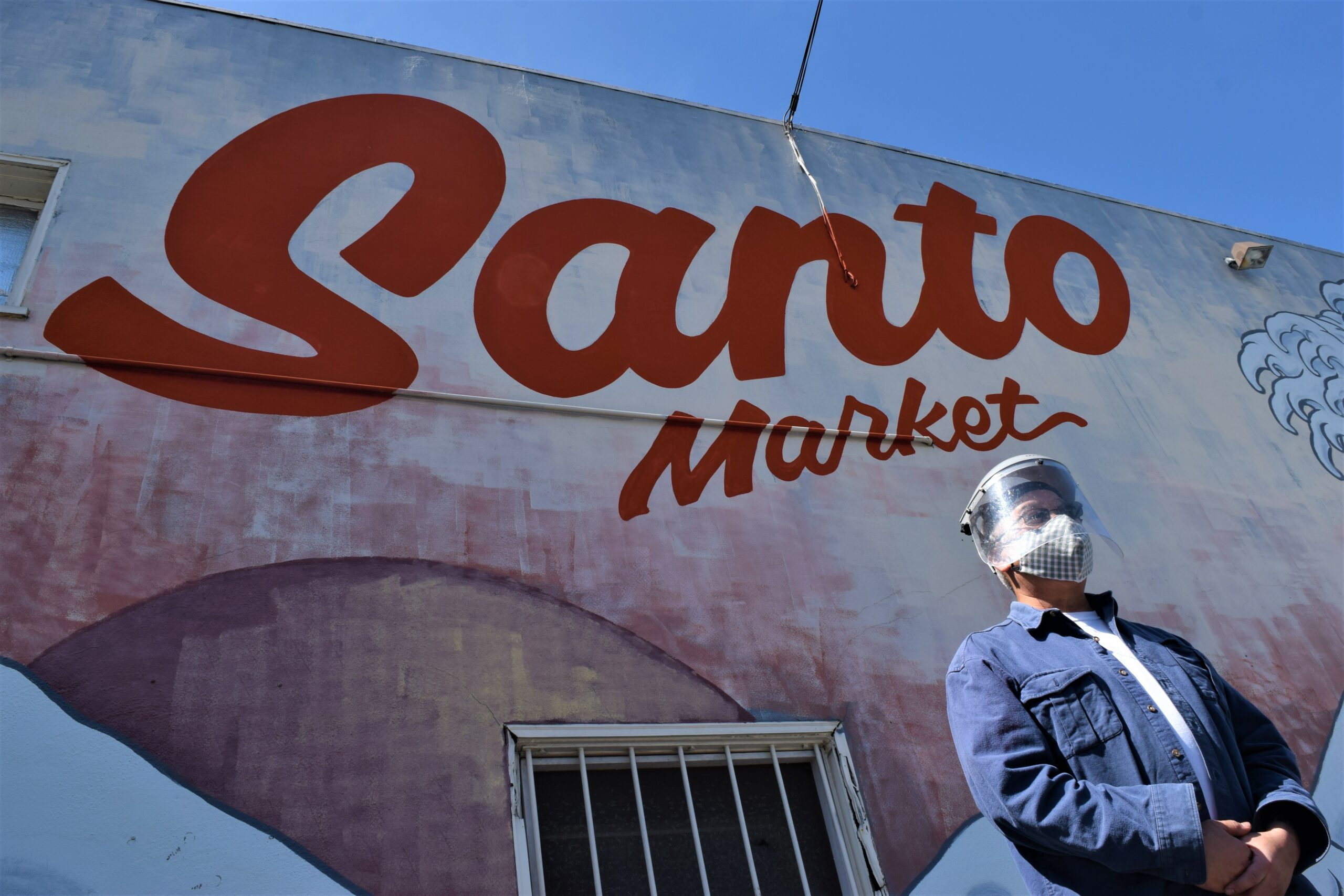 Mark Santo stands outside Santo Market on Taylor and Sixth Streets while describing how his business and Japantown have fared during the pandemic. (Photo by Sonya Herrera)

Some have seen more than others. Sean Yang is the owner of Kazoo Restaurant on Jackson Street. Having operated the restaurant since 1989, he says he’d never been the target of racist crimes or incidents until this year.

The crimes started small, Yang says. For example, someone smashed the restaurant’s front door last summer. Like Rast, Yang connects the rise in petty crimes to the dearth of jobs and other opportunities in the pandemic economy. But he’s noticed an increase in the frequency of crimes, as well as a change in focus.

Two weeks ago, someone ripped three of the Japanese lanterns from above the front entrance of Kazoo. “It’s a trend,” Yang says. “It’s getting worse.”

That’s around the time someone called the restaurant, and Yang answered, expecting to take an order.

“He said ‘I want to order a big cucumber roll and stick it into your Asian a**,’” Yang recalled. The restaurant owner paused, weighing his words. “We’ve never had that.”

The incident left Yang feeling sad, disappointed, and angry. “It just struck me… where did this come from?” he says. “We’re a part of this community… we don’t deserve to be treated any differently.” 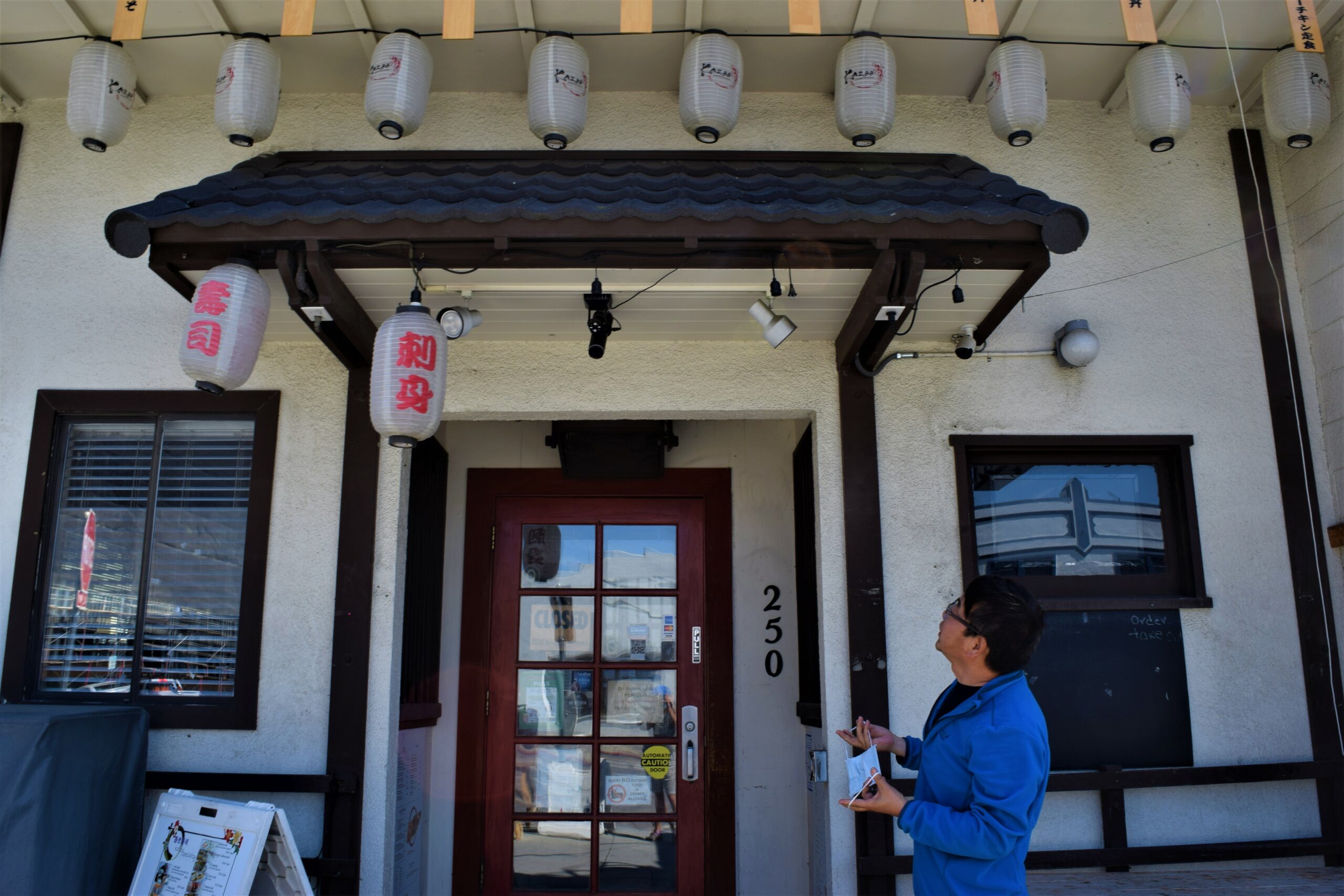 Sean Yang points out the area from which three Japanese lanterns were stolen from the front entrance of Kazoo restaurant a few weeks ago. (Photo by Sonya Herrera)

The restaurant employs a mix of Latinos, Asian Americans and immigrants, so Yang told his workers about the call. He urged them not to consider these racist incidents an obstacle, but to take precautions, such as traveling together at night.

The restaurant owner says he feels comforted by the fact that in the decades he’s lived in the area, he’s rarely experienced incidents like these.

“It was a one-in-one-million person who did this to us,” Yang says. “I’m not afraid.”

Yang says he prefers to focus on the positive. The support shown to him from customers, neighbors and nearby businesses shows him the resiliency of their bonds.

“Community power will overcome this,” Yang says. “There’s no room for hatred to grow in this area.”

Sakamoto says when people get to know one another, they have a greater motivation to protect each other. Her fellow volunteer, Lizzie Jones, agrees.

“There has been a brighter light on everything—we’re a lot more aware,” Jones says. “The more active the community is, the safer it is.”

Yang says seeing the community come together with the Japantown Prepared foot patrol to protect seniors and businesses gives him hope.