Residents of the Taube Pavilion in Mountain View, California, wake up in private rooms with views of the wooded Santa Cruz Mountains, have breakfast in airy communal spaces and can hang out in landscaped courtyards throughout the day.

It may sound like a resort, but the Taube Pavilion is a $98 million mental health facility that opened in June as part of El Camino Hospital. Designed by WRNS Studio, the 56,000-square-foot building is one in a new wave of facilities that are chipping away at outdated institutional models.

For decades, psychiatric hospitals were grim settings where patients were crowded into common rooms by day and dorms at night. But new research into the health effects of our surroundings is spurring the development of facilities that feel more residential, with welcoming entrances, smaller living units within larger buildings and a variety of gathering spaces. Nature plays a big role: Windows provide views of greenery, landscapes decorate walls, and outdoor areas give patients and staff access to fresh air and sunlight.

The new approach, promoted as healing and therapeutic, has produced environments that are more calming and supportive. And it feels particularly timely, given the surge in mental health issues created by the pandemic.

“We’ve been talking about this for a really long time,” said Mardelle McCuskey Shepley, chair of the department of design and environmental analysis in Cornell University’s College of Human Ecology in New York. “It’s only now that it’s gaining momentum.”

Even before the pandemic, the number of Americans affected by mental illness was at a new high. One in five adults was experiencing depression, bipolar disorder, schizophrenia, post-traumatic stress or some other malady, according to the National Institute of Mental Health. The rates were significantly higher for adolescents (about 50 percent) and young adults (about 30 percent).

Nearly a year into the pandemic, more people are suffering. Young adults and Black and Latino people of all ages are reporting increased levels of anxiety, depression and substance abuse, according to a survey from the Centers for Disease Control and Prevention. A recent Gallup poll showed that Americans felt their mental health was “worse than it has been at any point in the last two decades.”

Architecture and interior design firms with expertise in health care buildings have reported an increase in activity. At design firm Architecture+ in Troy, New York, one or two major mental health facilities are typically in the pipeline, with total construction costs for those projects at about $250 million a year, said Francis Murdock Pitts, a principal and founding partner. Last year, the firm was working on 16 large mental health projects totaling about $1.9 billion.

His firm and others like it have medical planners on staff who help translate research into “evidence-based” designs. “This isn’t just about being warm and fuzzy,” Pitts said.

For instance, exposure to nature has been shown to lower cortisol levels, a measure of stress. Adding healing gardens and other greenery can help soothe agitated patients and give staff a place to decompress.

But because mental health issues vary widely, there is no one-size-fits-all design solution. And safety—for both patients and staff—remains paramount. 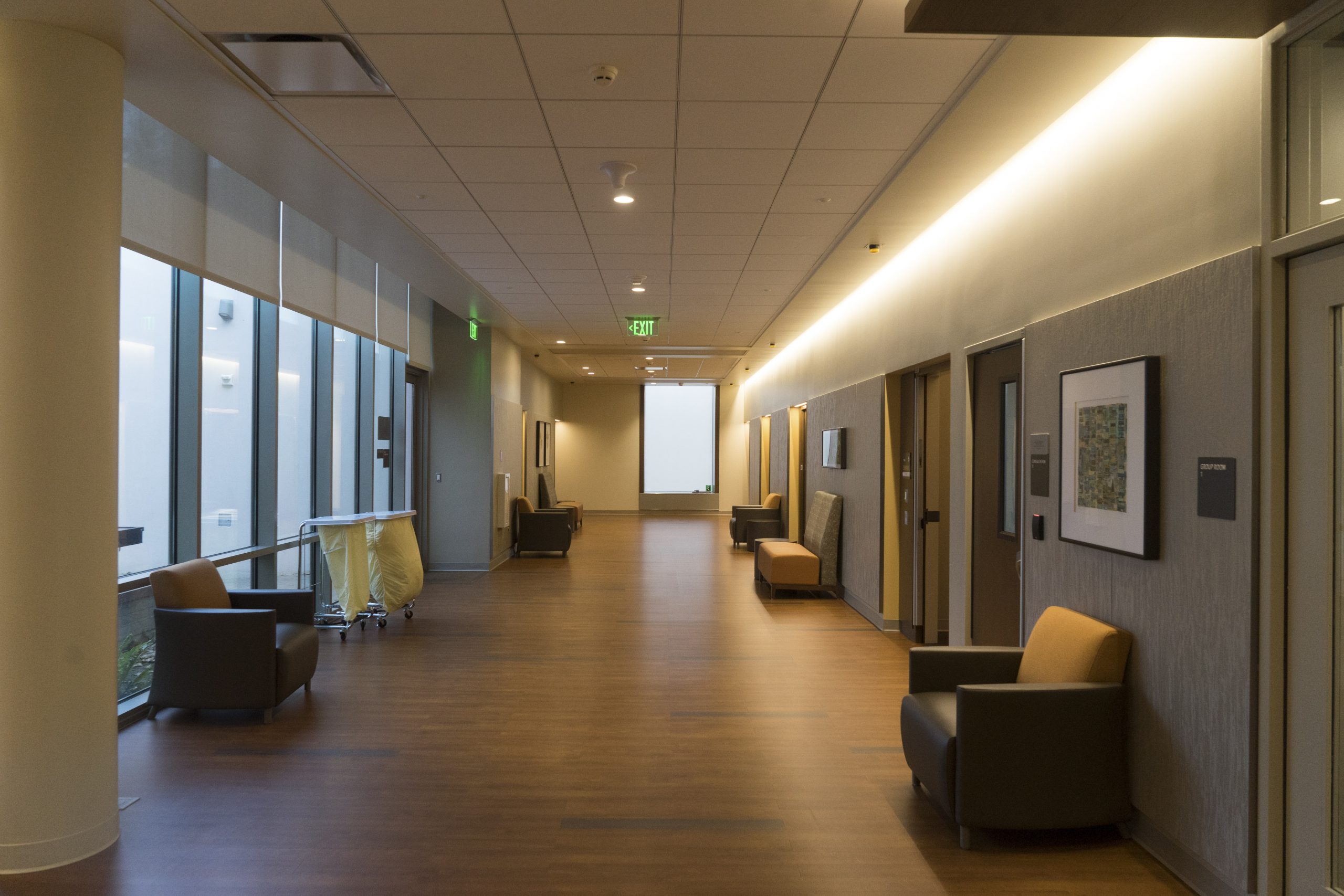 A wide hallway at the Taube Pavilion, a new mental health facility at El Camino Hospital in Mountain View, Calif., Dec. 30, 2020. New research into the effects of our surroundings is spurring the development of mental health facilities that feel more residential, like this $98 million project with private rooms, airy spaces and views of greenery. (James Tensuan/The New York Times)

Codes and guidelines fine-tuned over many years have sought to eliminate room features that patients have used to harm themselves and others. Window glazing is made of polycarbonate compounds to reduce breaking. Doors are hung on quick-release hinges to allow staff to enter a room if a patient is barricaded in. Plumbing and other fixtures have been designed to prevent the possibility of hanging or strangulation.

Such safety measures are crucial, but “you don’t want it to get to the point where it looks prisonlike,” Shary Adams, a principal at HGA, a national design firm said. At the same time that the built environment must be engineered to ensure safety, there is also a move to give patients some control over their surroundings. Manual thermostats allow patients to adjust the temperature in their rooms, for example, and dimmer switches let them modulate the lights.

The location of mental health facilities is changing, too. Psychiatric institutions used to be tucked away, but today they are likely to be part of hospital campuses or otherwise conveniently situated. They often combine inpatient rooms for those who need round-the-clock monitoring and areas for outpatient services, allowing patients to shift to less intensive care in the same building.

A state-of-the-art center for young people in Monterey, California, exemplifies the new approach. Montage Health, a nonprofit provider, broke ground on the 55,600-square-foot building in November.

Named Ohana, a Hawaiian word for an expanded concept of family, the facility will provide young patients with psychiatric treatment that sometimes involves their parents and siblings. Care early in life is crucial because half of all lifetime mental illnesses present themselves by age 15 and 75 percent by age 24, said Dr. Susan Swick, Ohana’s physician in chief.

She asked architects at NBBJ for a design that would possess some of the wonder of a children’s museum or a public library—“a place you step into that gives you a sense of soaring possibility,” she said.

The building will wrap around beautiful old oaks on the sloped site overlooking a verdant valley. It will house inpatient rooms, an outpatient treatment wing, multiple classrooms, and a variety of spaces for group and individual therapy.

The grounds will provide areas for yoga and informal gatherings. Paths will be lined with cedars and pines, rosemary and lavender—plants whose scents activate “natural killer” cells that can strengthen immunity, said Richard Dallam, a managing partner at NBBJ and a leader of the firm’s health care practice. 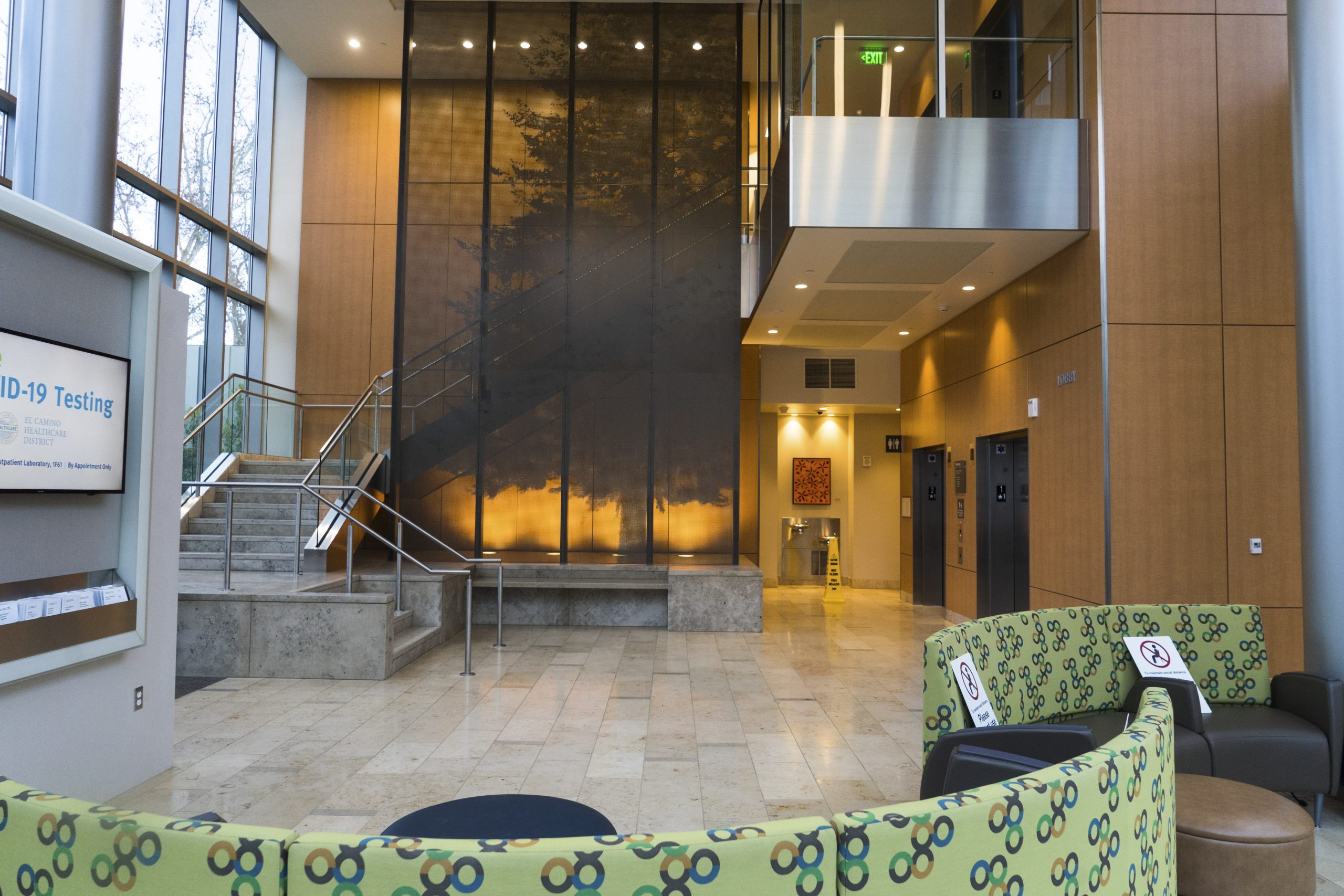 A lobby at the Taube Pavilion, a new mental health facility at El Camino Hospital in Mountain View, Calif., Dec. 30, 2020. New research into the effects of our surroundings is spurring the development of mental health facilities that feel more residential, like this $98 million project with private rooms, airy spaces and views of greenery. (James Tensuan/The New York Times)

With its swoops and curves, Ohana looks like a complicated building to erect, but it is being constructed with cross-laminated timber in modules that can be assembled off-site, reducing costs and speeding construction. Its price tag: $50 million, which is being covered by a $106 million donation that will also provide funds for clinical services.

Still, not every hospital system has an angel investor, and it is more expensive to construct buildings with these new designs—private rooms alone ratchet up costs.

But advocates say the upfront expenditure may result in savings down the road, improving staff retention, for instance, because workers are less prone to burn out and have to be replaced with new employees who must be trained.

“We try to use evidence-based design to help clients make a connection to other things on their balance sheet,” said Angela Mazzi, a principal at GBBN and president of the American College of Healthcare Architects, a certifying organization. “By investing in some of these things that are not a straightforward part of the clinical space, you’re going to get different outcomes and a different kind of payback.”