While the Bay Area as a whole is home to the nation's largest lesbian, gay, bisexual and transgender (LGBT) community, there's a stark difference when regions are broken down. San Francisco, unsurprisingly, claims one of the largest LGBT populations of any metro area in the US, but San Jose has one of the smallest.

A new Gallup survey of the 50 biggest metropolitan areas in the country asked something never invoked by the U.S. Census Bureau: "Do you, personally, identify as lesbian, gay, bisexual or transgender?" Read the entire survey, with analysis, here.

The resulting answers indicate that San Jose's LGBT community (3.2 percent of its population) is about half the size of San Francisco's per capita (6.2 percent). That places the capital of Silicon Valley 47th on the list, just ahead of Memphis, Pittsburgh and Birmingham. 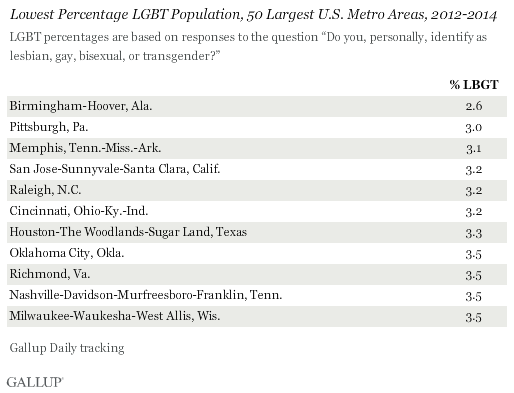 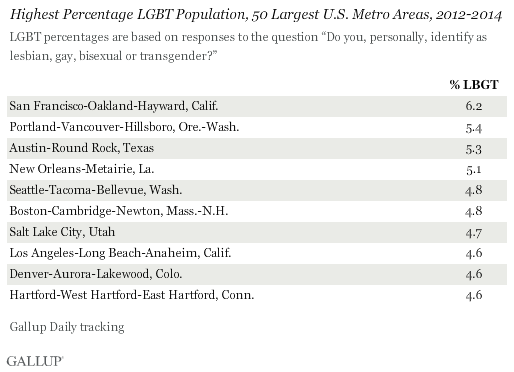 There is a caveat, however, that may change perspective on San Jose's results: Gallup used what it calls a "diffuse metropolitan area" instead of cities proper, lumping together Santa Clara and San Benito counties. If one counted the population in San Jose alone, that would probably tick up the percentage point. The same might hold true for San Francisco, which was pooled with parts of the East Bay, North Bay and Peninsula.

As with any survey of the LGBT population, there's some speculation about how the results were affected by nuances in the way pollsters phrased the inquiry or the average person's hesitancy to answer personal questions to a stranger over the phone.

California ranked 10th among states (4 percent), while the poll listed Washington D.C. at the top (10 percent) of its list. Generally, the results show that places with greater cultural, legal and political acceptance of the gay community have higher concentrations of LGBT residents. All but one state in the Top 10—South Dakota—has laws against discrimination based on sexual orientation and gender identity, and taken steps toward recognizing same-sex marriages, domestic partnerships and civil unions.

Santa Clara County came ahead of the count with its own survey, which showed slightly higher regional numbers (4 percent) than identified in the Gallup poll. Ken Yeager, the county's first openly gay supervisor, called for the assessment as part of an initiative to create a dedicated office of LGBTQ affairs. He envisions the department as similar to those that meet the needs of women, veterans, racial and ethnic minorities and immigrants. Supervisors approved his proposal this afternoon, which means the county will now draft a funding and staffing plan as part of the 2015-16 budget hearings in May.

Yeager, who was among those surveyed by Gallup, took the local assessment of the LGBT community several steps further by examining inequities in health, housing and social services to make a case for establishing an office to serve those needs.

He listed several of those findings in a report heard by his colleagues on the Board of Supervisors today:

Together, the national survey and the local health assessment give Silicon Valley the most detailed look to date of its LGBT population.

"It's a helpful baseline to have," said Yeager's spokesman, Jim Weston.