Election code revisions come up for review at Tuesday’s City Council meeting, well in advance of the Dec. 10 opening of the campaign contribution period for the June 2016 primary.

Earlier this month, the council voted 9-2—with Mayor Sam Liccardo and Councilman Don Rocha opposed—to eliminate the voluntary cap candidate spending. The limit was tied to the population of each council district and ranged from $130,000 for council hopefuls to $800,000 for mayoral candidates.

But the difference between state and local law confused candidates and City Clerk Toni Taber, who misdirected candidates in this latest council race. The result: about 40 candidates, including several currently serving on the council, broke the law. 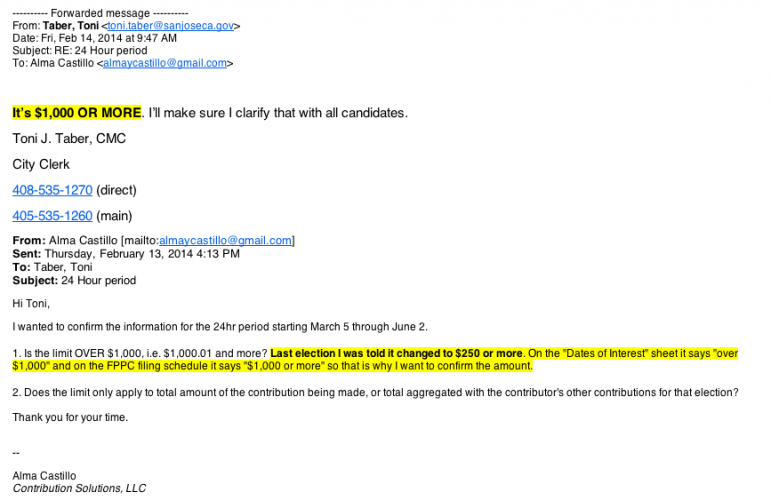 In the special election to fill the north San Jose District 4 seat this past summer, Councilman Manh Nguyen failed to correctly report about $200,000 in late contributions. While looking into a complaint against the newly elected councilman, the city’s Ethics Commission found a host of other violators. Some of them—namely Mayor Liccardo, Vice Mayor Rose Herrera and council members Rocha and Pierluigi Oliverio—voted for the laws in the first place.

Yet the city hit only Nguyen with a $10,000 penalty after a complaint was filed prior to his election.

The Ethics Commission then launched a sweeping probe into the 40 other violations. That investigation, led by law firm Hanson Bridgett, is expected to stretch into November. But it could take a while longer, depending on how quickly candidates respond to the investigators, according to Hanson Bridgett attorney Steve Miller.

Some other changes to the election code up for a final reading this week include having the city clerk send out a press release instead of a Mercury News ad to publish campaign statements.

The city will also change deadlines to retire campaign debt to 11:59pm instead of midnight, to avoid confusion about which day the deadline refers to. Candidates will only have to disclose who paid for mailings—not yard signs, fliers, and billboards—as per the state’s Fair Political Action Committee standards.

As for the voluntary spending cap, the council agreed that the purpose has been rendered moot since it does nothing to stop special interest groups from pouring unlimited cash to support or oppose a candidate—something protected as free speech after the Citizens United ruling.

More from the San Jose City Council agenda for October 20, 2015: