Despite a narrow escape from police during his last visit, Charles Lee returned to his native China on Jan. 22, 2003, to relay a message that would cost him the next three years of his life. The physician—a newly naturalized U.S. citizen who lived in Menlo Park at the time—spent more than a year rehearsing the proclamation he would deliver by hacking into a state-run television broadcast. He wanted to tell viewers about the Chinese Communist Party’s brutal persecution of the Falun Gong, a quasi-spiritual movement outlawed in 1999 as an “evil cult.”

Instead, Lee walked straight into the arms of his captors.

Public security officers told him that they knew of his impending arrival, he says, and arrested him as soon as he stepped off the plane. Until his release in 2006, Lee says, he endured torture, forced labor and attempts to brainwash him into rejecting the beliefs that rendered him a political target. But the spyware that ostensibly helped party officials zero in on him and thousands of other Falun Gong practitioners wasn’t created in China. Rather, the censorship and surveillance system—dubbed the Golden Shield—was crafted in his adopted homeland, at the San Jose headquarters of Cisco Systems.

Lee, now 52 and living in New Jersey, is one of the lead plaintiffs in a class-action claim accusing Cisco of designing software, hardware and training to help China’s ruling party persecute Falun Gong adherents, who believe in self-improvement through exercise and mindfulness. The lawsuit hopes to address an evolving legal question: Can American corporations be held liable if foreign authorities use their product for repression?

The federal district court in San Jose dismissed the case in 2014, saying Falun Gong victims—many of whom sought refugee status in the Bay Area—failed to prove that Cisco knew its product would enable oppression. But last month, the plaintiffs asked the 9th Circuit Court of Appeals to revive the allegations.

Attorney Paul Hoffman, who represents the Falun Gong members, says any perfunctory research would have alerted Cisco that its surveillance technology enabled systemic persecution. For more than a decade, Human Rights Watch, the U.S. State Department and the New York Times have reported how Chinese authorities subjected the Falun Gong to torture, enslavement, organ harvesting and “re-education” through labor. Cisco shareholders raised concerns in 2002, 2003, 2005, 2008 and 2010, according to Hoffman’s co-counsel, Terri Marsh.

“Back in 1999, 2000, 2001, 2002, we didn’t have all this high-tech equipment,” she told U.S. District Court Judge Edward J. Davila before he dismissed the case in 2014, according to official court transcripts. “It was novel. It was new. And everybody ... who were vying for the contract, for the Golden Shield contract in China, were asked, ‘Can it stop Falun Gong?’ Not, ‘Can it save me money?’ ... Everyone in the security tech business in China knew that the Golden Shield was to facilitate torture against Falun Gong and they certainly knew that Falun Gong were being tortured.”

Cisco has assiduously denied the allegations. “There is no basis for the allegations against Cisco,” company spokeswoman Robyn Blum tells San Jose Inside. “The lower court’s decision was the right result because Cisco builds equipment to global standards which facilitate free exchange of information.”

The outcome of the appeal, which has been placed on hold pending the outcome of a similar case, could have far-reaching impacts on how U.S. companies—and technology companies in particular—conduct business abroad. Although Silicon Valley touts its potential to promote human rights and democratization, it also creates tools of oppression, Hoffman notes. But at what point does a company become complicit?

“In my view, Cisco’s role in this case is unlike that of other U.S. technology companies doing business abroad,” Hoffman says. “In the digital age, repressive governments do not act alone to violate human rights. They have accomplices—including American technology companies like Cisco, as alleged by plaintiffs—with the sophistication and technical know-how that those repressive governments lack.”

Cisco attorney Kathleen Sullivan cautioned the court in 2014 about the risk of holding high-tech companies liable for violations of international law simply because they provide general-purpose technologies.

“If you hold that creating networking equipment and services, the same routers and the switches that are enabling everybody in this courtroom to connect across the internet today, if you hold that that technology, because it’s customized for police use, is somehow specifically directed at torture,” Sullivan argued, “I submit there’s the danger that it would take [Silicon] Valley down with it.”

The Cisco case largely rests on how much the company knew when working with the Chinese Communist Party on the Golden Shield. Marsh says Cisco went beyond merely providing routers and switches. The high-tech firm took pains to market the Golden Shield system as a way to find practitioners of Falun Gong. As proof, she points to a Cisco document leaked to reporters on the eve of a U.S. Senate human rights hearing. In the 90-page PowerPoint presentation, Cisco engineers framed the Chinese government’s crackdown on “‘Falun Gong’ evil religion and other hostiles” as a lucrative opportunity. 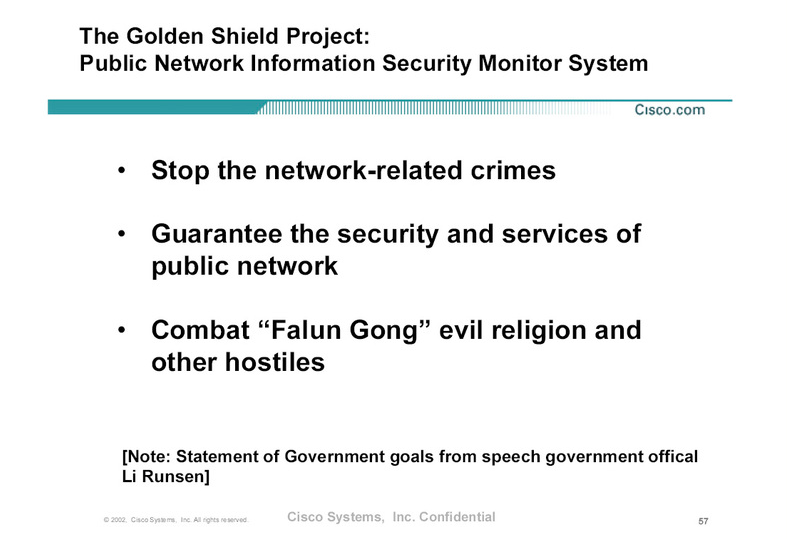 “They use a term, douzheng, which translates to a struggle, a persecutory campaign against a class of people disfavored by the Communist Party,” Marsh says. “Cisco used that term to describe the intent of this technology that they tailored for that purpose.”

There’s another important question the Cisco case could help to answer. If corporations enjoy the rights of personhood—as secured by the 2010 U.S. Supreme Court ruling in Citizens United v. FEC—then should they be held to the same standards of social responsibility? Corporations were designed to limit liability, says Francisco Rivera, head of the Santa Clara University School of Law International Human Rights Clinic. “If you invest in a corporations and things go bad, you only lose what you invested,” he says. “You don’t go to jail. That’s been the expectation”

But what if a corporation engages in human rights violations abroad?

U.S. courts are conflicted on that point. One possible remedy comes by way of an obscure 1789 law passed by Congress in response to piracy on the high seas. Called the Alien Tort Claims Act, the statute has become a way for foreign victims of human rights abuses, who often lack any other viable legal recourse, to seek remedies in U.S. courts.

Since a 2013 U.S. Supreme Court decision in Kiobel v. Royal Dutch Petroleum, however, lower courts have differed over how to apply the majority’s ambiguous holding that the Alien Tort Statute may only apply to actions abroad if the allegations “touch and concern” American territories. Marsh has argued that the claims against Cisco meet that “touch and concern” standard.

“But for San Jose’s high-level designs and oversight, implementation, this couldn’t have happened,” she told Davila in court. She added: “So the brain is in San Jose, without a doubt, and that’s why China had to have all these trade shows and reach out to the West. But some injury in this case also occurred in the U.S. Cisco took—there were a lot of U.S. companies that were competing for ... the security market in China, and Cisco basically won the contracts because they were willing, in my opinion, to facilitate what China wanted, which is the douzheng of Falun Gong.”

If aiding and abetting liability under the alien tort statute is to mean anything, Hoffman says, it must apply to corporations in cases like Doe v. Cisco.

In 2011, the same year Lee sued Cisco over its ties to Golden Shield, the United Nations adopted its Guiding Principles for Business and Human Rights. Multi-national corporations pledged to uphold the voluntary standards proposed by a coalition of governments. “That was important because those guidelines were formed by governments and not the industries themselves,” Rivera says.

Silicon Valley, in recent years, has taken similar pledges. When then-candidate Donald Trump talked about creating a database of Muslims, the biggest names in the high-tech industry signed the “Never Again” pledge. “We refuse to build a database of people based on their Constitutionally-protected religious beliefs,” the statement read. The pledge acknowledged the role technologists played in past oppression, including IBM’s efforts to streamline the Holocaust. Cisco signed, as did Palantir, the controversial data-mining company that provides critical technology for Trump’s ramped-up deportation efforts.

“We’re at a point of having to move beyond voluntary principles,” Rivera says.

Santa Clara University law professor David Yosifan wants to see corporate rhetoric about social responsibility align with corporate law. He is working on a book—titled Corporate Friction: The Social Cost of Corporate Law and How to Fix It and slated for publication in 2018—that will outline a prescription for reform. “If we cannot keep corporations out of our democracy,” he says, “then we must have more democracy in our corporations.”