Silicon Valley students will descend on downtown San Jose rain or shine on Saturday as part of a worldwide day of protest against gun violence.

Spearheading the local rally is March For our Lives San Jose, an organization led by students from Prospect High School in Saratoga. The young activists decided to take banded the group together in response to the Feb. 14  shooting in Parkland, Florida, that claimed the lives of 17 people.

The upcoming march builds on the momentum of the National School Walkout last week, which was called the biggest student demonstration since the Vietnam War.

Prospect High School senior class president Hiwad Haider said they got a lot of help from organizers of the San Jose Women’s March, but stressed that March For Our Lives San Jose remains a “student-led grassroots movement” against gun-violence.

“We envisioned a march and impact that’s similar to theirs,” he said. “We hope that the [march] is not a one-and-done, [but] a vehicle for student led efforts.”

Although though part of a nationwide demonstration, this weekend’s march from City Hall to Arena Green Park has been organized by local students with money donated through their GoFundMe account. 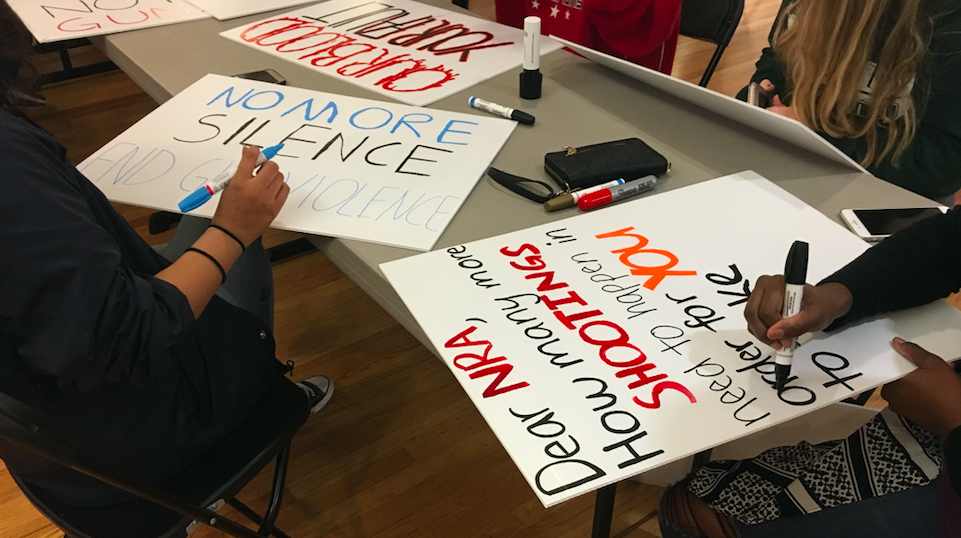 Students make signs at the Billy DeFrank Center ahead of Saturday's protest. (Photo by Stephen Perez)

As of Wednesday, they managed to raise just over $23,000 toward their $30,000 goal to pay for supplies, food and other items. Haider said the organization is a registered nonprofit, and the donations are tax deductible.

This past weekend, student volunteers convened at the Billy DeFrank LGBT Community Center to make signs and otherwise prepare for the upcoming march.

The gathering came right after an education town hall hosted by state Sen. Jim Beall, who pitched some ideas for securing schools and curbing gun violence by offering services to address the mental health of students. Lincoln High School student Hazel Stange attended on behalf of March For Our Lives San Jose.

“I support the idea, but I think when we get into the specifics things get a little more complicated,” she said. “There’s not a lot of money for public schools—and that’s the bottom line. When we hire these professionals that they’re there long term, can afford their rent and stay here, and be the best professionals they can be.”

Stange said her activism is focused more on keeping guns away in the first place.

“I come from a family of conservative Republicans, so really getting the message across that we’re not anti-gun, we just want bigger restrictions on them,” she said. “[We need] to make sure that they fall into the hands of people who are owning guns for the right reasons, going to people who are in the right mind, and who are able to really be responsible for that gun.”

The March for Our Lives mission statement emphasizes its non-partisanship:

Horrified by ongoing gun violence nationwide and heeding the call for action, we are local high school students working to bring attention to the need for more comprehensive gun laws, particularly for the purpose of school safety. After the shooting in Parkland, Florida, it is clear that tragedies like this could happen anywhere and that lawmakers need to act now. Making students feel safe in school is not, and never should be, a partisan issue.

Haider noted that he and his schoolmates plan to advertise the march by going into participating social science classrooms at Prospect High to talk about their experiences organizing the event.

“Not only are [we] trying to be contributing citizens,” he said, “it’s for a cause we think concerns [students], no matter what their political preferences are.”

The fledgling coalition has also been garnering support at various events, including the Santa Clara County Democratic Club, which allowed March for Our Lives set up a table at a recent candidate forum. Meanwhile, various local officials have been reaching out and extending their encouragement.

Assemblyman Ash Kalra (D-San Jose) stopped by one of their events this week to tell them to keep up the fight. He also reminded them that while California has some of the strongest gun laws in the U.S., the impactful reform needs to come from the federal level.

“I’m just very grateful that on an issue like this has been plaguing our nation really for decades that we are finally getting some action on it because of the students that are saying no more.”

Thank you for joining us at our signmaking party, @Ash_Kalra! #EnoughIsEnough pic.twitter.com/6fNIf3uM1a

Students who missed the event at the Billy DeFrank Center last weekend are invited to attend a 6pm meet-up at Hicklebee’s Bookstore in San Jose, where author Sara Saedi will talk about her experience as an undocumented teen after another sign-making session. Click here for more info.

WHAT: March For Our Lives San Jose
WHEN: 11am Saturday
WHERE: San Jose City Hall, 200 E. Santa Clara St., San Jose
GETTING THERE: VTA light rail or buses; Lyft is also offering marchers free rides
INFO: Check out the March for Our Lives Facebook page or find them on Twitter 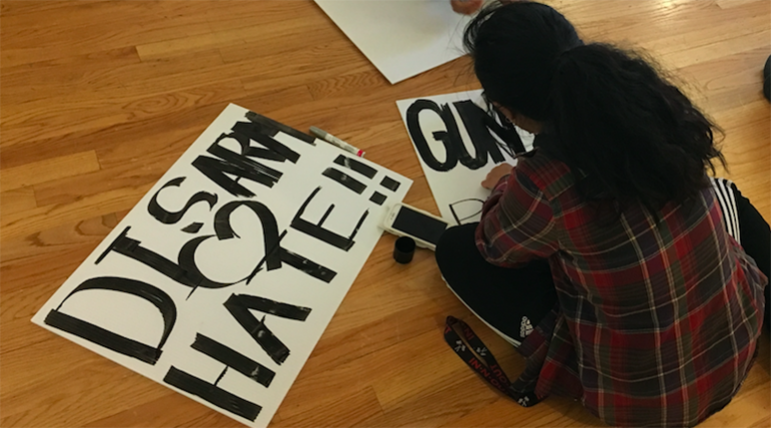 The sign-making party was organized by Prospect High students, the same group that's behind March for Our Lives San Jose. (Photo by Stephen Perez)