Thus, Jan. 24 marked the end of an era for the coffee shop, a 13-year-old institution in a 100-year-old building taken down by the 30-year-old law. 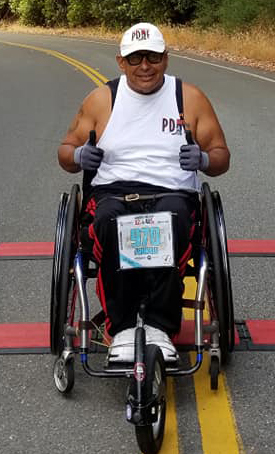 On Jan. 8, 2018, according to the lawsuit he filed in federal court, Rivera joined a buddy at Crema, a popular meet-up for (able-bodied) politicos, activists, students, artists and the nearby Billy DeFrank DeFrank LGBTQ Community Center. But the disabled jockey couldn’t even make it up to the outside patio.

“The only route contained steps, which he could not wheel up,” the lawsuit states. “He had to wait outside of the facility while his friend went inside and purchased coffee for him, which was frustrating.”

Rivera, who declined to discuss the case, has relied on a wheelchair to get around since 1979, when he fell off a horse and suffered a catastrophic spinal cord injury that rendered him unable to ride or walk ever again.

Crema proprietors said upgrading the entrance to the facility with a ramp would cost at least six figures and that paying $60,000 to settle the claim wouldn’t protect them from future litigation.

So, they opted to shutter the place—one of three Crema locations—instead.

Rivera referred questions to his lawyer, Tanya Moore, who’s notorious for bombarding thousands of small businesses with ADA lawsuits. Last fall, she reached a settlement in a federal case that accused her law firm of racketeering by shaking down mom-and-pop shops through canned lawsuits.

Moore, who didn’t get back to Fly by press time, has been blamed for putting scores of small companies out of business, including the Omelette House in Mountain View, Jason’s Café in Menlo Park and Time Deli in San Jose’s Midtown.