In the last City Council meeting of the calendar year, San Jose officials will debate whether to commission a study on charging an affordable housing fee for commercial development.

Historically, affordable housing fees have been tied to residential development, requiring builders to either dedicate a portion of a complex to below market-rate units or pay in in-lieu fee.

Last year, the council adopted a $17-per-square-foot assessment for all new residential development of three or more units. But that fee doesn’t go into effect until summer 2016 and won’t generate revenue until 2018, per city staff reports. Once rolled out, the residential fee is expected to generate just $5 million a year initially and between $10 million and $20 million in 2020 and beyond.

A dearth of affordable housing funds matched by a historic surge in housing costs prompted city leaders to consider a similar fee for non-residential building. A commercial-linked assessment could bring in another $6 million to $14 million per annum, based on the average level of construction for the past six years.

Before implementing a new housing fee, however, the city has to study whether there’s a legal connection between new commercial development and the need for more affordable housing. The council on Tuesday will consider whether to commission a nexus and feasibility study.

A 2015 report by the National Housing Conference found that the San Jose metro area is the third-most expensive market in the nation. It’s also the second-priciest market for home ownership. Since 2010, San Jose has seen rents increase by more than 11 percent a year, according to RealFacts.

San Jose aims to set aside 60 percent of new homes for low-income families. But income-restricted housing requires public subsidies in the San Jose market, according to the city’s Housing director, Jacky Morales-Ferrand.

It should be noted that San Jose’s job growth and commercial development has lagged behind other cities in Silicon Valley. Santa Clara County has the strongest job market in the nation, but San Jose’s job base grew only 2.5 percent a year between 2010 and 2014, according to the city. That’s half the rate of the county overall.

While vacancy rates have declined, San Jose still has more empty office and retail space despite lower rents than neighboring cities. Since 2010, San Jose has gained the Samsung and Brocade headquarters in its commercial northside district, as well as new offices in Santana Row. The city also welcomed a new Bass Pro Shop, a couple new shopping centers, the Avaya Stadium and several small hotels.

“But, compared to its neighbors, San Jose has struggled to be competitive for new commercial construction, especially in the two largest categories regionally: office and R&D,” Morales-Ferrand wrote in a memo to the council.

Because the city has struggled to attract new commercial development, there’s a risk in enacting a new fee, she cautioned.

Mayor Sam Liccardo, Vice Mayor Rose Herrera and council members Chappie Jones and Manh Nguyen said the city should hold off on a local study in favor a regional solution. 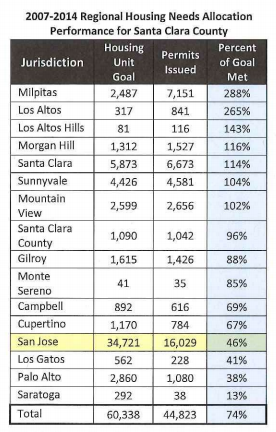 “With regard to affordable housing, we need to recognize that two assertions can be equally true: First, we've made several unprecedented efforts to produce more affordable housing, and to advocate for state legislation to enable us to do so,” they wrote in a shared memo. “Not the least of our efforts include becoming the largest city in the U.S. with a citywide inclusionary and impact fees on residential developers, forging legal battles that have taken us to the steps of the Supreme Court. At the same time, we can do everything ‘right’ on affordable housing, and still fall woefully short of our community's needs, given the much larger forces of supply and demand that shape this outcome.”

Councilman Don Rocha said it's disheartening that his colleagues want to postpone the matter until San Jose's jobs-to-housing ratio changes. In a separate memo, he said that the city should also look at a regional solution, but stressed that the there's a moral obligation to act quickly because so many residents are grappling with high housing costs and homelessness.

“It's especially important that we act now, because there is an opportunity for regional leadership on this issue,” he wrote in a memo co-signed by council members Ash Kalra, Raul Peralez and Magdalena Carrasco. “Most of the other cities in the county have either already implemented a commercial impact fee, or are joining the countywide nexus study lead by the [Silicon Valley] Community Foundation. This interest in fees seems to be indicative of an increasing willingness across the county to support housing.”

More from the San Jose City Council agenda for December 15, 2015: