As wildfires ravage vast swaths of California wildland and other parts of the globe increasingly feel the effects of climate change, San Jose is trying to ban natural gas in new construction and boost the number of electric car chargers in future developments.

The sustainability standards pitched by Mayor Sam Liccardo and City Council members Raul Peralez, Lan Diep, Magdalena Carrasco and Dev Davis are on track to become part of San Jose’s new building “reach codes.” If the California Energy Commission gives them the green light, they can go into effect when the clock strikes 2020.

While California has its own set of clean-energy regulations that developers must meet, cities can go a step further by enacting reach codes—basically rules that “reach” beyond statewide sustainability thresholds by making zero-emission electric building the standard. On Tuesday, that’s exactly what San Jose did in a unanimous council vote.

In so doing, it became biggest city in the US to adopt all-electrification requirements on new residential buildings and gas bans on commercial construction.

By early next year, developers may have to opt for electric appliances and other infrastructure in single-family homes, backyard cottages, low-rise buildings, apartments and condos. If all goes according to plan, the changes could cut greenhouse gas emissions in new buildings by up to 90 percent and save owners and tenants money on utility bills.

Liccardo and his colleagues also want to require 70 percent of parking spots in new apartments to at least have the infrastructure for charging ports, with another 20 already equipped for charging and the remainder reserved for “service equipment.”

“We are providing an example of the kind of concrete action that we can take today to confront a climate emergency and send a clear signal ... about our commitment to preserving our planet,” Liccardo said at a Tuesday press conference. “We are showing here through community leadership how we can confront this climate crisis, a crisis that has been largely ignored with the abdication of federal responsibility on this issue.”

“We’ve been able to move further than a number of other cities across the country and in fact achieve the top spot in our goals of reaching these sustainable development goals as well as just our goals combatting climate change,” he added.

Councilors are also requesting that the city explore funding, financing and partnerships that would offset costs for installing solar and battery storage and electric car infrastructure in new affordable housing. They’d also examine financing for electric appliances and take inventory of the electrification programs offered in California.

In an interview ahead of the council vote, 15-year-old Helen Deng said she welcomes the new code because she “supports policies that will turn the tide on the climate crisis.”

“I don’t want to grow up knowing even more fossil fuels are becoming inextricable from societal structures, simultaneously risking my education to fight for climate action and other solutions,” she said in an interview with San Jose Inside. “There’s too much at stake, and if our own cities can’t pass ambitious reach codes, how can young people have hope for real action on the global scale?”

Councilwoman Sylvia Arenas praised community support for the initiatives—particularly that of young people who showed up to voice their concern about climate change.

“The next generation, they just get it,” she said approvingly. “They’re pushing us and I really like what you all had to say about reaching. Sometimes we have to reach further than what we anticipated.”

But some critics are worried about the impact the new rules would have on housing production. Erik Schoennauer, a local land-use consultant, called it a “noble cause,” but expressed worry about whether it would slow projects in the city’s development pipeline.

“New policies like this add new costs and new layers of complexity, especially on housing,” he said. “Whenever a new public policy is implement on development, there needs to be a transition period. Otherwise we risk delaying or killing projects.”

“I talked to four developers before I came to the council meeting and they disagreed with the assertion that they were going to save with these regulations,” Khamis said. “My whole goal is to not increase the price of housing.”

City staff and Councilwoman Pam Foley said they believe improving energy efficiency through reach codes will actually save money in the end. The D9 representative was a strong supporter of the stricter building regulations, but due to certain open meeting laws, was unable to sign onto a memo supporting the proposal.

“In the long run, if a builder doesn’t have to put in gas and electric, bottom line is the cost is going to be cheaper,” she said.

That doesn’t mean she has no concerns, Foley added. For one thing, she said, she worries about how reach codes will impact the stability of the electrical grid.

Before San Jose starts making these changes, city officials must first submit the new reach code proposals to the California Energy Commission by Sept. 30 and file them with the state’s Building Standards Commission before the end of the year. 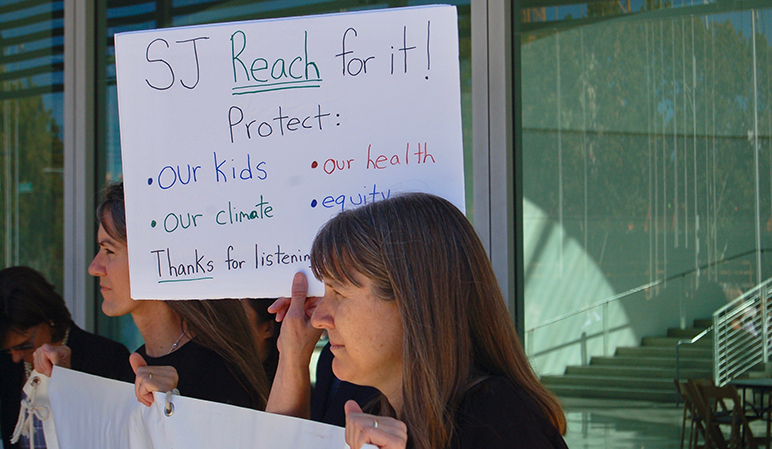