After three-and-a-half years as chief of the Los Gatos-Monte Sereno Police Department, Peter Decena has resigned. The town announced his two-week notice in a press release sent out after 5pm on Friday, Sept. 3.

“Los Gatos-Monte Sereno (LGMS) Police Chief Peter Decena submitted his resignation, effective September 16, 2021. Chief Decena served the Town with distinction. An Interim Police Chief will be announced in the near future and there will be a recruitment for a new Chief,” the town’s statement read.

Decena had been working with the town to implement police reforms, including work with de-escalation, inherent bias and compassion training. In April, he recorded a video calling for the public’s help in identifying the attacker of a health care worker of Asian descent in what was described as a hate crime. 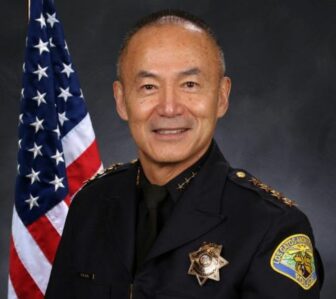 Decena served as chief of the San Jose State University Police Department for eight years prior to his hiring by LGMS in April 2018.

A year after Decena’s hiring by LGMS, controversy ensued over the use of excessive force by officer Johnathon Silva, who was hired September 24, 2018. Silva had worked under him as a San Jose State officer while Decena was chief.

Silva was cleared of misconduct in subduing 57-year-old James Russell Newlon on Town Terrace with a carotid hold. Chief Decena expressed reluctance to ban the carotid artery hold but changed internal policy to allow its use only when absolutely necessary. California subsequently voted to outlaw the sometimes lethal practice, and Gov. Gavin Newsom signed the bill into law.

Silva resigned in 2019 after it came to light that while an officer at San Jose State, he had been fired for the violent beating of a mentally ill library patron. Silva was reinstated after he appealed the termination.

Silva this year sued Los Gatos for wrongful termination, contending the town knew of the San Jose library beating before it hired him.

“I am confident in the department to continue our community policing values during this leadership transition,”  Mayor Marico Sayoc said in the town’s statement.

Decena’s position paid $329,834 in salary and benefits in 2019, according to Transparent California.

In an interview with the Los Gatan, Sayoc said Decena helped the police department navigate the “troubled waters” of the last couple years.

“Definitely the past two years have been tumultuous, as it has been across the country with protests, Asian anti-hate (activism), and a lot of social justice issues,” she said. “When people resign we just wish them well in their future endeavors.”