Labor and business leaders squared off in dueling pressers Thursday over whether San Jose should extend a tax-break on high-rise development.

The incentive, which gives builders a 50-percent-off discount on construction taxes, dates back to the mid-aughts and was designed to spur new housing development in the hollowed-out heart of the 10th largest city in America.

Market-rate developers also get to skip a $17-a-square-foot affordable housing fee—if they met certain criteria, such as a stamp of approval by June 30, 2021, that the building is safe for people to live in. To date, projects that took advantage of the deal have added 1,522 homes to San Jose’s housing stock, according to the city.

As the City Council gears up for a vote next week on whether to re-authorize the subsidy for another few years, labor bosses are pushing back in a way that their business counterparts are calling a politically motivated attack.

Addressing reporters outside City Hall this morning, officials with Silicon Valley Rising—a union-coalition led by the South Bay Labor Council and Working Partnerships—slammed Mayor Sam Liccardo for backing a program that they say benefits his political patrons and cuts into tens of millions of dollars in revenue for affordable housing.

Nine projects are currently eligible for the subsidy and could add well over 3,000 units to the city’s housing stock, according to city estimates. 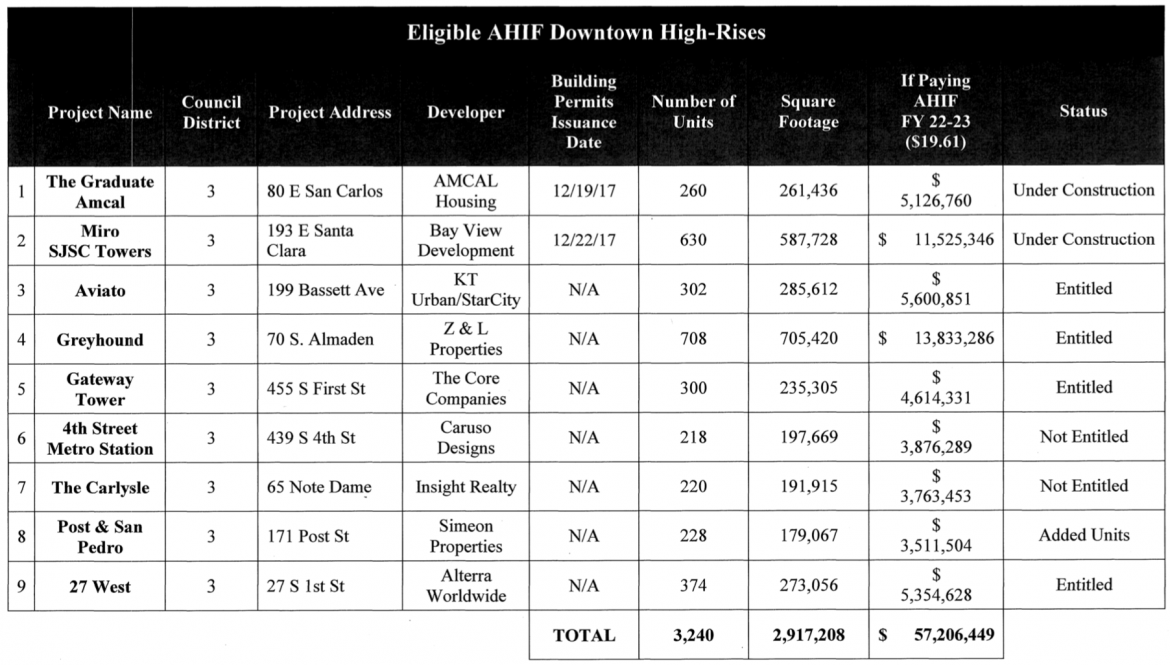 Nine developers stand to gain a combined $57 million in subsidies if the program gets re-upped for another few years.

“I think there’s going to be substantial resistance to the idea that $67 million in give aways does nothing but increase developer profits,” South Bay Labor’s Executive Director Ben Field told San Jose Inside.

Field’s coalition referenced campaign donations made by nine developers to Liccardo’s election campaigns or political causes he supported from 2016 to 2018, including a $450 million housing bond and a sales tax hike to fund transportation upgrades.

“It’s a terrible deal for the city’s taxpayers,” Field said about the subsidy. “And to make matters worse, these nine downtown luxury housing developers, they happen to be big contributors to candidates for city council and mayor in the city of San Jose.”

Sandy Perry, who leads the Affordable Housing Network, said the discount for new development comes at a human cost.

“Tens of thousands of people are being displaced from their homes and the city altogether,” he said. “What’s going on in City Council right now is that the mayor and some council members are completely tone deaf to this crisis because they’re relieving wealthy developers from their affordable housing requirements.”

Proponents of the fee exemption, on the other hand, say it’s needed to speed up housing production for all income levels. And they bristled at labor’s attempt to paint Liccardo as the ringleader of a policy historically backed by both labor and business interests.

To wit: an extension of the incentives program sailed through in December 2016 with ‘ayes’ on all sides. Liccardo, Vice Mayor Chappie Jones and council members Magdalena Carrasco, Sergio Jimenez, Johnny Khamis and Raul Peralez all voted for the tax break at the time. And going back to the early days of the policy, labor doyenne and then-Councilwoman Cindy Chavez teamed up with business-friendly Mayor Chuck Reed to back the subsidy in the years that led up to the Great Recession.

“We have reduced fees—with no direct city subsidy—to enable projects to get built downtown, but the reduction will soon expire,” Liccardo said. “The downtowns of other cities experiencing rising rents—such as Seattle, Dallas, Atlanta, and Austin—are seeing dozens of high-rise cranes in the air, but if [the] council doesn’t extend the existing fee reductions, San Jose will continue to suffer through its housing crisis with a puzzling dearth of high-rise construction.”

At a news conference just a few blocks down and outside the Silicon Valley Organization (SVO) headquarters, the mayor's allies batted away labor’s criticism as trumped-up and intentionally misleading.

SVO President Matt Mahood decried the tactic as “politicizing” the issue. “In the past, labor groups have supported changes in the fee structure in order to bring construction jobs into the city of San Jose,” he said. “Both union and non-union projects.”

The reason for the politicking, Mahood went on to say, is that South Bay Labor wants to drum up support for its Fair Election Initiative—a ballot measure that would exempt certain developers and their lobbyists from donating to campaigns for city office.

“You look at some of the projects on the list that need this fee reduction and they’re new product types like co-living, which are being pioneered in downtown for the first time,” he said of the “dorms for adults” concept. “This is where you can build denser. This is where you can take advantage of transportation.”

Field objected to the idea that the coalition’s specific focus on the mayor is political.  “The mayor’s been leading the charge to subsidize these projects,” Field insisted.

But as the mayor pointed out in a statement earlier today about Chavez's involvement, he’s hardly been the only one “leading the charge,” to quote Field.

A November 2016 memo shows that Peralez, who represents downtown, teamed up with Liccardo to promote the fee waiver. During his re-election bid last year, Peralez was widely endorsed by labor, business and developers—including some of the same developers that Silicon Valley Rising accuses Liccardo of “padding their profits.”

“We must also recognize what this proposal is not: it is not a ‘giveaway’ of public money,” Liccardo and Peralez wrote in their 2016 memo. “To the contrary, for those several projects which remain stalled for lack of financing, this can result in a net fiscal gain to the taxpayer, if future revenues are properly discounted over time.”

“Why?” the duo added. “A project that does not get built will not generate any fee revenue; regardless of the fee rate, 100 percent of zero is zero.”