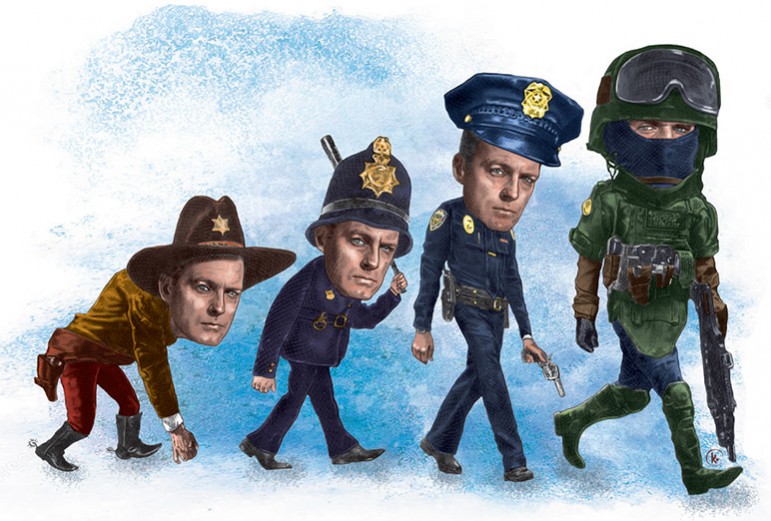 Local law enforcement has evolved as weapons have grown more sophisticated, especially in the last 20 years. (Illustration by Kym Balthazar)

More so than the policies and changes in law that have bolstered law enforcement’s ability to use deadly force, a stark increase in the militarization of local law enforcement agencies has occurred. Call it the sharing economy of war.

Before the US threw itself into two protracted wars in the Middle East, the Department of Defense in 1997 instituted its Excess Property Program, better known as the 1033 program, as a way to transfer surplus military supplies and equipment to state, county and city departments.

It was pitched as taxpayer savings, equipping local law enforcement agencies with valuable tools to fight crime, rather than an admission that the Pentagon’s budget was morbidly obese. To date, the program has handed off more than $5.1 billion in free military equipment, with almost $450 million going out just last year alone. Much of these transfers have occurred out of the public view, however, with little to no dialogue between communities and their local law enforcement agencies about the need for items such as mine-resistant tanks, assault rifles, grenade launchers, surveillance equipment and many other items.

A national dialogue about the militarization of local police departments came to the forefront in August, after 18-year-old Michael Brown, an unarmed African American in Ferguson, Missouri, was shot to death by an officer in broad daylight. Riots and protests about a predominantly white police force’s over-aggressive treatment of a predominantly African American community were met with an iron fist response. For several weeks body-armored officers shot tear gas at crowds and armored vehicles patrolled the streets under martial law.

The National Guard was called in and Attorney General Eric Holder opened a probe into accusations of police brutality by Ferguson officers. The scene looked foreign and terrifying from the confines of Silicon Valley, but it turns out many of the instruments of war seen in the hands of Ferguson officers have also been acquired by Bay Area law enforcement agencies.

Just 20 days after Brown was killed, the San Jose Police Department announced it would be giving back its Mine-Resistant Ambush Protected vehicle, or MRAP, which is basically a transport tank that can withstand roadside bombs.

In fact, SJPD has stocked up on a variety of weaponry that suggests the department is actually well-equipped for any insurrection. Among the million-plus dollars of equipment gifted to Santa Clara County law enforcement agencies from the 1033 program over the years, SJPD alone acquired: a $733,000 MRAP; a 2,500-gallon fuel tanker for air support; four reconnaissance camera systems; 175 reflex sights to make it easier to pinpoint targets with assault rifles; 129 additional reflex sights specifically for M4 assault rifles; 116 camouflage bags to carry gear; 58 ballistic goggles; 40 buttstocks, which can be used to brace a rifle against the shoulder; and 30 pairs of snow-colored camouflage trousers for snipers. Yes, snow camouflage.

San Jose has received more items than those listed, but perhaps most telling is that none of the 32 assault rifles received by county law enforcement agencies, according to public records requests, went to SJPD. That would mean the department felt it had little need for more guns but wanted scopes to use them more effectively.

According to Sheriff Smith, her office has only received a Humvee and a tent from the 1033 program, which she lamented in an interview earlier this month.

San Jose Police Chief Larry Esquivel declined multiple requests for an interview, but according to SJPD Deputy Chief Dave Hober, who agreed to a 30-minute interview by phone, discussions to give back the MRAP began early this year, well before the Michael Brown shooting and 1033 program garnered national scrutiny.

“The reason the San Jose PD got the MRAP initially was primarily to assist us with any type of explosive type of situation,” Hober says. “By explosive, I mean an actual bomb, so that we could get closer to the explosive in the MRAP.

“Every community has to make its own determination if it’s right for that community or not. We like to be on the cutting edge and look at new types of technology and that kind of thing, so that’s what we did here. After we looked at it and had some discussions it was determined that at this time, we decided it was better (to get rid of it).”

Meanes, of the National Bar Association, applauds San Jose’s decision to relinquish the MRAP—it was transferred to the Los Angeles County Sheriff’s Office in September, according to SJPD—but she argues that there is “no reason” for local law enforcement to be accepting any of the 1033 equipment.

“The use of those items do not go toward building trust between the department and the individuals they were hired to protect,” Meanes says. “In cases where you see cities that have this equipment, there is a requirement in some of those grants where they must utilize that equipment in a one-year period or they are in violation of the grant. That’s not a healthy rule or regulation. It’s almost an encouragement to use police force that we would consider overkill and unnecessary.

“There is an impression that the police are really trying to protect themselves from a segment of society.”

San Jose police are more than a little hesitant to discuss their SWAT team, known as a MERGE Unit. Press officers repeatedly deferred to the department Duty Manual rather than discuss what instances require the 14-man tactical squad to be deployed. The manual is vague, perhaps by design. Hostage situations and suspects who have barricaded themselves are obvious targets, but the MERGE Unit also conducts search warrants for parole violators and drug sweeps.

Sgt. Heather Randol, a public information officer for SJPD, wrote in an email that the department does not know why numbers were so much higher in some years. She attributed the sharp increases to “natural fluctuations for all Special Ops and Investigative Units throughout the years.”

While SJPD refused to comment on its matrix for MERGE Unit deployment, one possibility for the sporadic deployment is that other units are being equipped with weapons and body armor that go beyond what is normally associated with street-level enforcement teams.

“When I started in this job, any time we had any kind of a tactical incident, the patrol officers would surround that incident, or try to surround it, and hold and wait for when the SWAT and tactical teams could come,” says Deputy Chief Hober, a 27-year veteran second-generation SJPD officer. “We’ve had a great change in the way that we now train our police officers, because we know if a SWAT team is not here or tactical officers are not here—it takes them sometimes an hour to arrive on scene—so if our patrol officers are not actively doing something to actively stop that threat where somebody is harming other people, then they can do more damage.”

SJPD has a page on its website describing its “special ops” units, which includes the Metro Unit, which “gives special attention to illegal narcotic law enforcement, with focus on the street-level user and dealer,” according to the site. The description also notes that the unit coordinates with the Mayor’s Gang Prevention Task Force and “other community and school organizations, bringing together their combined expertise to intervene, prevent and educate those involved in adult and youth gang situations in San Jose.”

This is the logo for SJPD's Metro Unit.

This description almost gives of the impression of a community policing model, but Metro Unit’s logo is a Call of Duty-style officer aiming an assault rifle, silhouetted against a city skyline.

Radley Balko, a journalist and author of the book Rise of the Warrior Cop: The  Militarization of America’s Police Forces, has spent more than a decade highlighting the danger of “mission creep,” specifically the increasing trend of local agencies deploying militarized SWAT teams for low-level offenses, such as drug possession.

“The gear and weapons and tanks are a problem,” Balko said in an interview with Vice. “But I think a much deeper problem is the effect all of this war talk and battle rhetoric has had on policing as a profession. In much of the country today, police officers are psychologically isolated from the communities they serve. It's all about us vs. them.

“For 30 years, politicians and public officials have been arming, training, and dressing cops as if they're fighting a war. They've been dehumanizing drug offenders and criminal suspects as the enemy. And of course they've explicitly and repeatedly told them they're fighting a war. It shouldn't be all that surprising that a lot of cops have started to believe it.”

By comparison, Sheriff Smith sees the deployment of SWAT—which steadily increased in the previous five years from four callouts in 2009 to 25 last year—as an almost ideal situation.

“Calling out SWAT teams for small things, it doesn’t matter,” she says. “It doesn’t matter if you call out a special team that has better skills on something that is even just a regular, routine search warrant. They have special equipment and special training. They’re not the military branch of the sheriff’s office. It’s a bit of a nuance, but it’s great to have a team that works together, that trains together all the time in any kind of an operation. But we can’t send them out to everything. So it’s not a negative to send out our SWAT team, I don’t think, at all.”