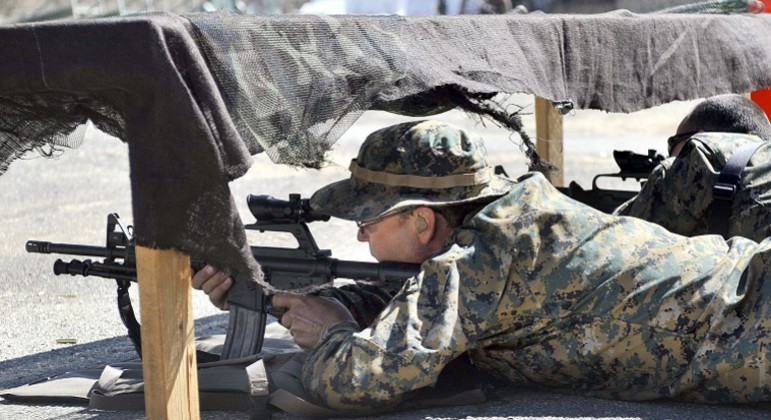 The Santa Clara County Sheriff's Office has its own gun range, which also has hosted "Best of the West" SWAT competitions. (Photo by Lora Schraft)

Robert Weisberg, a law professor at Stanford University who has more than three decades of experience in the field of criminal justice, says the Supreme Court has intentionally provided cushion for law enforcement through rulings such as Tennessee v. Garner and Graham v. Connor. The decisions allowed for “all kinds of room for subjectivity” in what constitutes a threat, Weisberg says, but also puts the onus on law enforcement to prove suspects showed an “imminent proclivity of inflicting grievous harm on someone.”

Almost a decade ago, SJPD modified its Duty Manual—the police Bible—to come into line with what were then considered national law enforcements’ “best practices” for use of force. Rather than have officers escalate force in steps—from verbal commands to using their hands, pepper spray, a baton, Taser and as a last resort a firearm—police were given more latitude to make snap judgments on the best way to gain control of a situation. The current policy is referred to as a “continuum of force.”

Both the San Jose Police Department and Santa Clara County Sheriff’s Office put cadets through an academy, where they must meet proficiency marks for firearm accuracy, as well as pass a test on how and when to escalate a use of force. After that they have bi-annual range tests to continue using their firearm, and annual “carbine” certification tests if they want to have the ability to carry more deadly automatic rifles.

SJPD Lt. Jason Dwyer teaches the use-of-force block in the academy, which, he notes, has the highest cut score. Cadets are given two chances to pass. If unsuccessful on the second try, after additional training, the cadet is “terminated” from the force, Dwyer says.

“It’s up to the officer to select the tool they would use or level of force they would use for a situation,” he says. “You basically use the most reasonable choice based on a situation. It’s heavily rooted in case law. People can Monday morning quarterback forever, but the officers involved have to make that decision in a split second, and thankfully the courts recognize that.”

Pamela Meanes, president of the National Bar Association, the largest organization of African-American attorneys in the country, says over-aggressive use of force and the militarization of law local law enforcement agencies has redefined “protect and serve.” Her organization is in the midst of a year-long project to expose police brutality in 25 regions across the country, including San Jose.

“As the National Bar Association has traveled around, there is no question that there has been a line drawn between police and the community that hires it to protect it, especially in minority communities,” Meanes says. “They feel like the police is not there to protect them and serve them.”

Sheriff Laurie Smith, who oversees a 1,300-person department with about 550 active patrol officers, and other law enforcement professionals reached for this story take umbrage with that notion. Smith’s office has had 11 officer-involved shootings since the beginning of 2009, and despite saying there has been internal discipline for officer-involved shootings in the past, she appears to have no regrets on her officers using lethal force.

“I laugh at movies when someone is pointing a gun at the cop and the cop says, ‘stop,’ and the cop gets shot,” Smith says. “They do that all the time in the movies. It’s not realistic. We have to make sure that we’re safe.

“Our deputies do not get paid to get killed.”

However, the number of people dealing with mental illness who are shot by officers complicates the narrative. A lawsuit against the county Sheriff's Office was filed just last week by the family of Andrea Naharro-Gionet, a 61-year-old woman who suffered from mental illness and was shot to death last November after allegedly advancing on officers with a knife. The DA has not yet released its report on that incident.

SJPD created its Crisis Intervention Training, or CIT program, in 1999, and it has become part of the standard training for all new recruits. According to the OIS incident reports published by the DA’s office, it appears more than a third of the 20 incidents involved a suspect who suffered from some form of mental illness, ranging from depression and suicidal thoughts to carrying out a psychopathic active-shooter scenario.

She adds that while these individuals are dangerous to the community and officers, that doesn’t necessarily mean their crimes should land them in jail or prison.

“I have been told that we run the largest mental health facility in the county: the jail,” Smith says. “And we have excellent, excellent treatment. We have one of the [best] mental health facilities; other counties—Alameda County, San Mateo County—send us their seriously mentally ill because we have that kind of facility.”

The only solution, Smith surmises, is to create more treatment facilities and beds for people who are suffering from mental illness.

In the case of 19-year-old Diana Showman, San Jose police officers were forced to respond to a 9-1-1 call Aug. 14 in which she threatened to kill her family and said she had an Uzi. The weapon, in fact, turned out to be a black power drill. Showman, who suffered from bipolar disorder and was actually home alone at the time of the incident, walked on the lawn and repeatedly aimed the drill at surrounding officers. Officer Wakana Okuma, a 13-year veteran of SJPD who was CIT trained, fired one round and killed her.

The DA is in the process of completing its investigation on whether Officer Okuma will be charged, and Rosen tells San Jose Inside the initial facts seem to justify Okuma’s use of force.

“There are a lot of mentally ill people that are not receiving appropriate mental health treatment, for a variety of reasons,” Rosen says. “They refuse it or their family is ashamed, feels shameful about the person receiving treatment, and the person ends up decomposing.