Three bullets still remain in Javier Gonzales-Guerrero’s body. One in his spine. Another in the tailbone. The third is lodged in his left leg. At least 17 bullets made their way out. Some went straight through, others were taken out in bits over the course of a dozen-plus surgeries. He has screws in his knee and a rod that fortifies his right femur. His body burns from scars and nerve damage, and for eight months he wore a colostomy bag. His doctor at Stanford, Ivan Chang, told him he’d have no choice but to live with the bullets and the pain. Surgery would risk paralysis. In addition to the aches in his hip and knee and spine that force him to sit up in the middle of the night—reminding him of that fateful morning three years ago, when police punctured his body like Swiss cheese—the mirror tells a similar story, as a scar runs across his right cheek from a bullet that grazed his face. That may have come from one of the same shots that went through his hand as he covered his head in fear.

The last moment Javier Gonzales-Guerrero remembers from that day is opening his eyes to a San Jose police officer standing over him. He blinked at the man with the gun. Four more officers stood below him—he didn’t see them. They’re the ones who shot first.

“Put your hands in the air!” one officer shouts, according to depositions. “Don’t move!” says another, contradicting his partner.

A little more than a year later, an attorney sitting in a 16th floor suite at San Jose’s downtown City Hall will ask Gonzales if he raised his arms before he got shot.

“Okay,” says the attorney. “Why did you put your hands down to the right side of your body?”

“Because I got shot,” Gonzales says. “It was so painful.”

And then officers shot him some more. 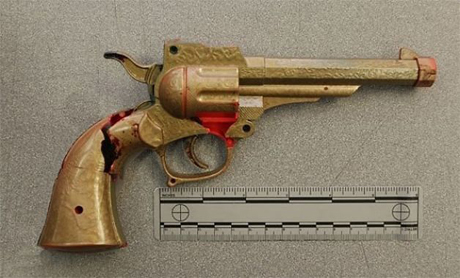 This is the toy gun San Jose police officers believed was real when they shot Javier Gonzales-Guerrero at least 20 times.

It was Oct. 22, 2011, and Gonzales, 25 at the time, did what many people his age do around Halloween. He got dressed up in a costume and had some drinks with friends. All Natural Stone was holding its annual company party and Gonzales, who had done some contract work with the tile supplier, wanted to be safe, avoid drinking and driving. He checked into a room at the Extended Stay Inn with a couple he knew, and he and his buddy each poured a cranberry and Grey Goose into plastic cups.

People got tipsy at the party, as they do. Gonzales dressed in a sombrero and OR scrubs, the latter component serving as an ominous choice for what would later transpire. Witness interviews found that he took a picture with a woman at the party, Jacqueline Bartlett, who came dressed as a “nun with a gun.” For her costume she painted a plastic toy pistol gold, apparently to make it look “more real.” The prop got passed around like drinks throughout the night. Gonzales returned to his hotel well after midnight, the toy gun tucked in his waistband. His friends had come back earlier and didn’t answer his phone calls when he was trying to remember which room they were in.

Gonzales fell asleep in the stairwell after a few unanswered calls. Other hotel guests tiptoed around him later that morning. When the hotel maid had no luck waking Gonzales, the hotel manager went to rouse him and saw that he had a gun in his waistband. She called 9-1-1, and San Jose police officers were dispatched. Gonzales was passed out on the stairwell between the third and fourth floors, and one officer, Jeffrey Banister, made a tactical decision to go up an extra floor. Four more officers approached from below the landing on which Gonzales slept.

Banister called down to his fellow officers, "Do you want me to Tase him,” but no one responded. Instead, guns drawn, the four officers below the landing shouted their presence. Gonzales didn’t respond. Rather than risk being attacked in ambush—despite knowing Gonzales had been asleep or unconscious for some time—the officers, nerves turned up, continued to thunder verbal commands on a man who was just starting to wake. Shots soon followed.

An investigation by the Santa Clara County District Attorney’s office says Gonzales reached for the weapon—a weapon all of the officers assumed was real; only the dark butt of the toy gun was visible—and police opened fire. When Gonzales recoiled in pain, they unloaded another volley of rounds. Somewhere between 24 to 26 shots total—inexplicably, that number was never precisely identified in the DA’s report.

Officers involved in the shooting appear to have given inconsistent orders, according to depositions in a civil suit that Gonzales filed. Three SJPD officers—Mark and Tim Stephens, and Gary Petrakovitz—all say Gonzales only reached for the toy gun when they opened fire on two separate occasions. But Sgt. Brian Johst, who fired three to five rounds, says Gonzales actually pulled the gun out and aimed it at the officers. All four men were standing right next to one another.

Those conflicting accounts could be why the city of San Jose settled the lawsuit out of court last year for almost $5 million, or about $250,000 per bullet wound.

The DA cleared all officers of criminal charges in a report made public in November 2012, noting that the officers feared for their lives and used a proper amount of force “due to an apparent and immediate threat of great bodily injury or death to themselves and other individuals.” The DA also said no charges should be filed against Gonzales—whose blood alcohol that morning measured .10—because waking up in a haze doesn’t constitute defying an officer’s order.

But none of the four officers were ever disciplined internally by SJPD beyond the typical 10-day administrative leave imposed after anyone fires their weapon. In fact, of SJPD’s 25 officer-involved shootings from 2009 through 2013, not a single officer has ever been disciplined. 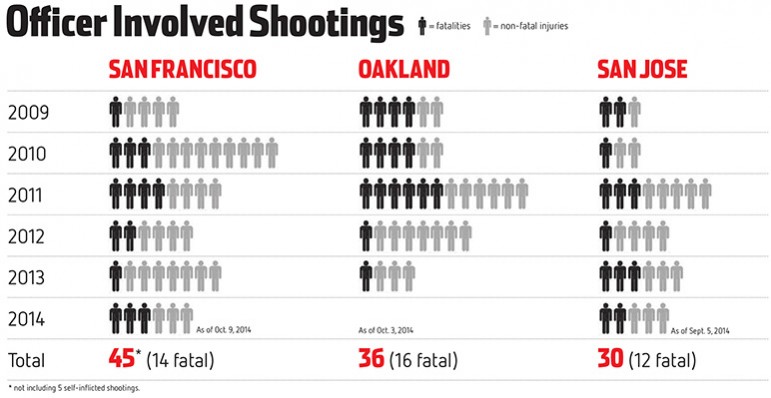 Several patterns emerge from a close look at officer-involved shootings by South Bay law enforcement during the past five years. Almost all of the officer-involved shootings involved male suspects. Most had lengthy rap sheets, although Gonzales and one other person shot by SJPD did not. Most of the incidents occurred in East San Jose. Approximately 60 percent of the people shot by SJPD identified as Latino, according to the Independent Police Auditor's annual reports. Almost a third of people shot by San Jose police in those reports, 28 percent, were unarmed.

Fear and the self-preservation instinct come into play when law enforcers evaluate a situation and make split-second decisions. A moment’s hesitation can have grave consequences. Cops know that 24-year-old SJPD rookie Jeffrey Fontana was ambushed and killed 13 years ago in an Almaden Valley cul de sac, and that two veteran Santa Cruz officers were surprised and killed last year when they showed up at the doorstep of a barista suspected of sexually assaulting a co-worker.

Fear led to Gonzales’ tragic shooting, and it is what has motivated officers to escalate their responses to the most deadly of force. An officer’s fear for his or her life, the potential of a great bodily injury and/or the risk that someone could flee and commit a violent felony, has been cited in every instance in which South Bay officers have shot, and sometimes killed, members of the public. In several cases they have fired their guns in response to other shots, unaware that the only bullets were coming from other officers’ weapons.

The defense for using deadly force is rooted in case law, but even staunch supporters of SJPD, such as the late Police Chief Joseph McNamara—who liked to tell stories about working the beat in Harlem for two decades and never using his gun—have openly questioned how quick officers are to now pull the trigger.

“Yes, police work is dangerous, and the police see a lot of violence,” McNamara wrote in a 2006 op-ed for the Wall Street Journal. “On the other hand, this isn't Iraq. The need to give our officers what they require to protect themselves and us has to be balanced against the fact that the fundamental duty of the police is to protect human life and that law officers are only justified in taking a life as a last resort.”

San Jose Inside’s records requests have found that the Bay Area’s three largest law enforcement agencies—police departments for San Jose, San Francisco and Oakland—have taken part in 111 officer-involved shootings since the beginning of 2009. Forty-two people died from their injuries. While this information is open to records requests, it is not readily available and law enforcement agencies have actively sought to keep much of the details of these incidents out of the public eye.

At last count, approximately 750 law enforcement agencies across the country self-report data about officer-involved shootings (OIS) to the FBI. That number equates to just 4 percent of the total number departments nationwide. The Santa Clara County Sheriff’s Office says it reports in-custody deaths to the California Department of Justice, while SJPD says it reports “justifiable homicides." But the last report on the state DOJ's website for such incidents is nearly a decade old. And much has changed since then.

D. Brian Burghart, editor of the alt-weekly Reno News & Review, started his own crowdsourcing database in 2012 to track the number of people across the nation being killed by police. He described the site, FatalEncounters.org, and his experiences in an op-ed this summer.

“The biggest thing I've taken away from this project is something I'll never be able to prove, but I'm convinced to my core: The lack of such a database is intentional,” Burghart says. “No government—not the federal government, and not the thousands of municipalities that give their police forces license to use deadly force—wants you to know how many people it kills and why.”