The trash-strewn lot has languished empty for years—too awkwardly shaped and steeply inclined for the city to use. But the idle parcel at San Jose’s South Fourth and Reed streets could very well save a historic building from a date with the wrecking ball.

On Tuesday, the City Council will vote on whether to offer up the L-shaped property as a new home for the 120-year-old Pallesen Apartment Building, which KT Urban would otherwise have to demolish to make way for the 27-story Garden Gate Tower project.

Per the agreement, Habitat for Humanity will buy the land from the city for $1 and transform the Pallesen into below-market-rate housing. But not before KT Urban foots the arm-and-a-leg cost of relocating the four-unit apartment a few short blocks away. 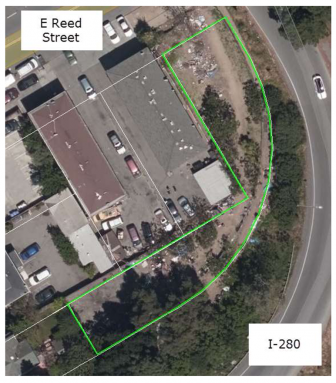 An overhead look at the city parcel, which Habitat for Humanity plans to buy for $1. (Source: City of San Jose)

The Preservation Action Council of San Jose—called PAC*SJ, for short—plans to present a $10,000 ceremonial check to Habitat for Humanity at a presser Tuesday as seed funding for the final phase of a drawn-out campaign to save the green tea-colored four-plex.

Proponents of the deal applauded the city for setting a positive precedent of bringing together developers, preservationists and the community to protect San Jose’s architectural heritage while creating more affordable housing.

KT Urban Principal Mark Tersini began searching for a place to relocate the Wolfe & McKenzie-designed Mission Revival-style apartment a year ago. But it was hard to find any takers because of the challenges involved with moving a two-story building south of the I-280, which would require destroying the apartment’s historic integrity.

On Oct. 23, the Planning Commission voted 4-2-1 to approve the Garden Gate proposal, with one commissioner opposing the application because of the Pallesen’s likely demolition. In response to the criticism, Tersini suggested moving the building to the Fourth-and-Reed site. About a month later, on Nov. 19, downtown Councilman Raul Peralez championed the relocation idea and directed city staff to team up with Habitat for Humanity to make it happen.

“We advocated saving this historic building at every forum where its fate was considered ... while encouraging developers to see the value to their projects of preserving and respecting San Jose’s rich but dwindling historic fabric,” PAC*SJ founding member John Mitchell said. “The cost of moving and restoring historic buildings is significant, so this time we went one step further. We hope PAC*SJ’s donation will inspire others to give generously to this project and many others like it. We believe that the evolution of our urban environment can be done while making room for our history.”

Now comes the fateful vote on the Fourth-and-Reed parcel.

In a memo to city leaders about this week’s impending decision, San Jose Director of Economic Development Kim Walesh touted the proposed $1 sale as a “good opportunity to support both affordable housing and historic preservation.”

Under the agreement up for consideration Tuesday, Habitat for Humanity has committed to a 55-year deed restriction limiting all four potential units for sale at the revamped Pallesen to families earning less than 60 percent of the area’s median income. Ownership of the land would revert back to the city only if it becomes no longer majority-owned by an affordable housing non-profit, according to the memo.

“The project will address two issues in the city’s interest,” Walesh wrote. “First, the desire to maximize affordable housing provision on the Fourth and Reed site [and] within the downtown area, and second, the need to find a receiver site for the Pallesen Apartments to preserve the city’s historic resources and sense of place.”