Californians had a lot to keep track of this legislative season, as lawmakers worked to the buzzer debating bills to ease the crushing housing shortage, reform policing and loosen a year-old state law that limits use of independent contractors in the gig economy.

Back in San Jose, city officials and Google’s real estate team were crossing their fingers over the lower-profile Senate Bill 995, which failed in the 11th hour of an especially chaotic lawmaking session. The bill would have given Google—along with other major projects across California—a badly needed four-year extension to qualify for a state program designed to fast-track development.

The multinational tech giant aims to build a massive corporate campus—with 6.5 million square feet of offices, up to 5,000 homes, hotel rooms and 500,000 square feet of retail—near San Jose’s Diridon Station. When complete, the mega-campus could employ around 25,000 people. Though Google has long planned to use the streamlining certification, the company has fallen behind to meet the Dec. 30 deadline to qualify.

Now, San Jose and Google officials are “exploring options about how to respond,” to the bill’s last-minute failure, Kim Walesh, the city’s economic development director, told San Jose Inside. “The failure of SB 995 was a surprising and disappointing setback.”

“Surprising” may be an understatement.

SB 995 received broad, bipartisan support as it made its way through the Legislature. Many lawmakers liked it for its potential to spur more development—including new housing—during the coronavirus-caused recession. The bill, approved by both legislative bodies, looked destined to pass. Then, last-minute amendments bounced from the Assembly to the state Senate and didn’t get a final approval.

“It’s truly disappointing that the Assembly took this bill up too late on Monday night, leaving us with no opportunity to concur in the amendments before the constitutional deadline,” said state Sen. Toni Atkins (D-San Diego), the bill’s author. “These days, a roof over your head and a job to pay for it are something Californians need more than ever.”

Mayor Sam Liccardo is also calling for the Legislature to convene a special session to get the bill passed, a proposal that the Diridon Area Neighborhood Group, a community led collective, said Friday they also support.

Mountain View-based Google announced last year it would use the program, called the Jobs and Economic Improvement through Environmental Leadership Act, or AB 900.

The law comes with a list of requirements, including limits on greenhouse gases, prevailing wages for construction workers and the creation of skilled, well-paying jobs.

AB 900 also promised to speed up potential litigation, sending lawsuits straight to an appeals court, ensuring a verdict within nine months—an attractive prospect for developers hoping to avoid delays that can kill a project before it begins.

“More certainty is really what they want,” said Michael Lane, San Jose director for urban planning think-thank SPUR, which backed SB 995. “Particularly for a large project where they’re trying to line up their financing and keep things on schedule, they want certainty.”

Google and San Jose officials knew from the start that the AB 900 timeline would be tight. Then Covid-19 hit Santa Clara County, halting or slowing most industries. Community meetings—mandatory for major real estate projects—were off the table.

Officials revealed last month that a key environmental report for the Google project would be delayed from its planned Aug. 25 release until mid-November, driving home the tech giant’s timing woes.

“In a moment of historic levels of joblessness and amid our chronic shortage of affordable housing, we will continue pushing forward with this transformative project to ensure that our community can benefit from thousands of affordable apartments and millions of square feet of workspace," he said in a statement Friday. 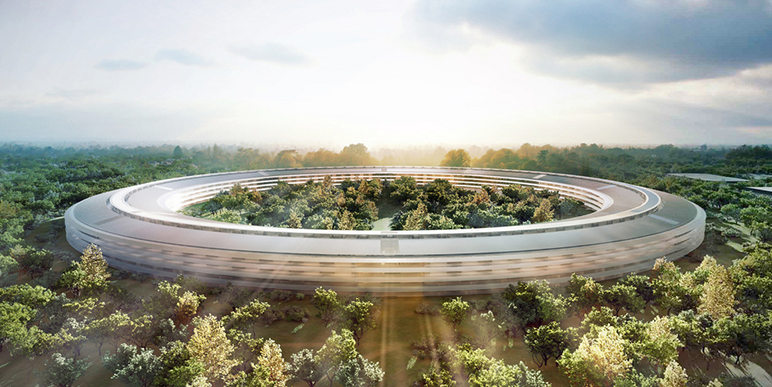 Apple alone accounted for a $1.5 billion increase in property tax value, largely because of its new spaceship-style campus in Cupertino. (Image by Norman Foster, via Flickr)

Taking AB 900 out of the equation will impact Google’s San Jose development—no doubt. But the tech titan is assessing the impact and working with San Jose officials on next steps, a company spokesperson assured Thursday.

Google isn’t alone in this predicament.

Though the creators of AB 900 originally envisioned it for things like  massive stadiums, it’s increasingly used for developments such as Google’s mixed-use project in San Jose.

In the Bay Area alone, eight companies and developers have applied for the program since its 2011 passage to jumpstart the economy after the Great Recession. Combined, those projects propose about 13,000 homes, 14.3 million square feet of commercial space and a couple new stadiums for the Oakland A’s and the Golden State Warriors.

Some have already been completed, including Apple’s 2.8 million-square-foot, donut-shaped Cupertino headquarters that is thought to have cost more than $5 billion. But other developers, including Google, are losing a race against time.

Notably, SB 995 would’ve also allowed more projects with housing to qualify for fast-tracking. That would have been a boon for the region, Lane said.

“These are larger projects that can really develop a lot of the housing that we need in the right places,” he said in a call Thursday.

There may still be hope for SB 995—or something like it.

Liccardo is still hoping for resolution this year.

"We urge a special session that will enable the Senate to consider SB 995, because this project has already met state criteria — and if not for COVID related delays, the City wouldn’t need an extension," he said in a statement Friday.

Atkins said Thursday she will “continue our work on these efforts next year.”

“Housing and jobs are two of the most fundamental needs facing Californians,” she said. “SB 995 would have provided for more housing and good jobs by creating a new tool developers could use to build more affordable homes and by increasing cities’ ability to do upfront planning and streamline approvals.”

Lane plans to hold her to her word. SPUR will push lawmakers to pick the issue back up right away in the new year, he said.

“We can’t have anyone in limbo,” Lane said. “The workers who will be building these projects need to have the assurance they’ll be able to get back to work and we’ll be able to have our economy rebound quickly. This is the way to do that”