UPDATE, Feb. 22: San Jose issued mandatory evacuation orders in the early morning hours to more than 14,000 residents who live in the vicinity of Coyote Creek. Parts of Highway 101 were closed due to flooding as people flocked to hotels, emergency shelters or homes of friends and family to evade the rising waters.

According to the Santa Clara Valley Water District, the Anderson Dam spillway discharge peaked during the day Tuesday, but flows are still heavy into Coyote Creek. The East Williams Street gauge peaked later in the day Tuesday, but the waters are now receding very slowly. Coyote Creek at Highway 237 began receding just after midnight and Highway 101 was re-opened this morning. The water district cautioned against driving through flooded waters.

“If floodwaters rise around your car, abandon the car and move to higher ground. A foot of water will cause many vehicles to float,” the district wrote in an email. “Two feet of rushing water can carry away most vehicles, including SUVs and pickups.”

Sign up for emergency alerts at www.SCCgov.org. The American Red Cross is helping people who have been forced out of their homes. To find out how to support those efforts, call 800.733.2767 or text REDCROSS to 90999 to make a $10 donation.

After days of storms dumped record rainfall throughout Northern California, the Anderson Reservoir filled to the brim Monday and sent water roaring down the concrete spillway and into Coyote Creek. The rising waters prompted daring rescues and forced evacuations of homes, encampments and office buildings in parts of the South Bay. 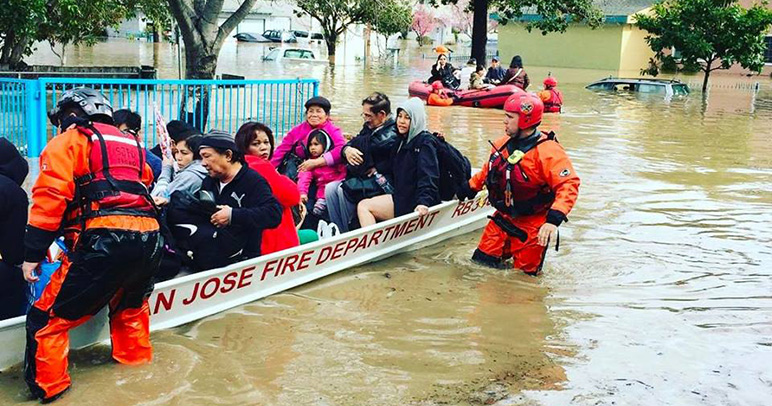 (Photo by Chris Smead, via Friends of San Jose Firefighters)

More than 100 people who live around Senter Road and Phelan Avenue had to leave their homes after the muddy waters submerged their cars and rose halfway up their front doors. Rescue boats went from house to house in the Nordale community, picking up people who were trapped in their homes. 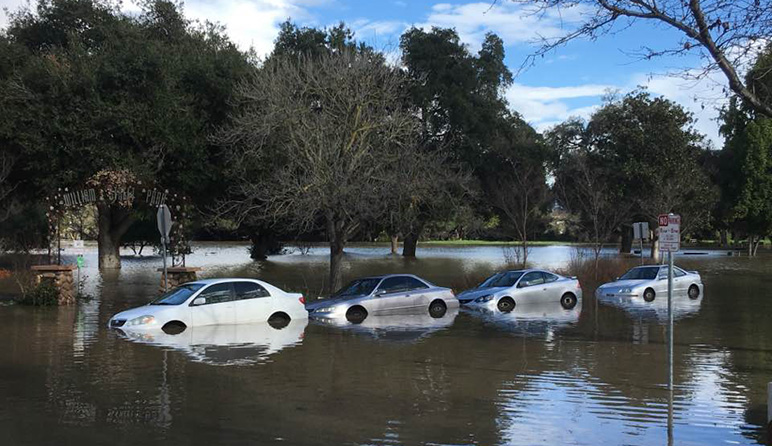 San Jose police also ordered more than 300 county Social Services Agency (SSA) employees to evacuate their offices on Senter Road as they filled with water. Those SSA offices will remain closed until further notice. For the time being, clients can still apply for services online at www.MyBenefitsCalWIN.org. For emergency help with CalFresh or other free food resources, call 800.984.3663.

For help with other services handled by the SSA, clients can visit the following locations: 1330 Middlefield Road in Mountain View, 379 Tompkins Ct. in Gilroy, 650 S. Bascom Ave. in San Jose or 880 Ridder Park Drive in San Jose. In addition, The Department of Aging and Adult Services will continue providing services at 333 W. Julian St. in San Jose until otherwise noted.

Overflow from the Guadalupe River flooded a parking garage Monday night at Mineta San Jose International Airport, but was pumped out by the next morning. 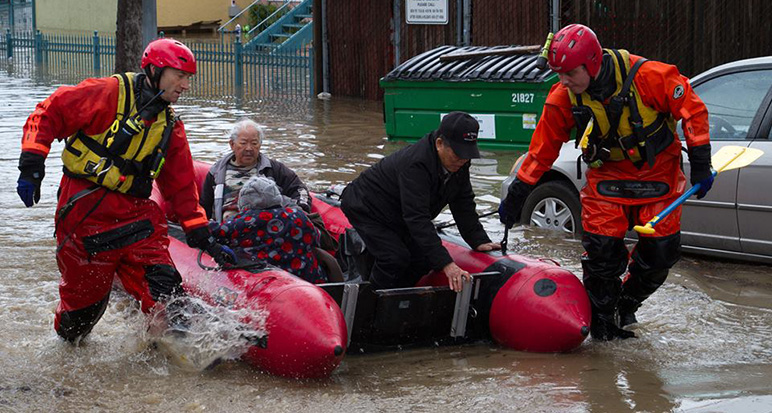 San Jose, home to one of the nation’s largest populations of unsheltered homeless people, dispatched rescue teams on boats and a helicopter to creekside homeless camps overwhelmed by the swollen waterways.

Firefighters rescued several of homeless people stranded along Coyote Creek by the Los Lagos Golf Course on Tuesday morning, as dozens of others climbed trees and scrambled up the riverbanks to escape the rushing waters.

Outreach workers have been visiting homeless encampments throughout San Jose to spread word about the floods and where people can find emergency shelter—at James Lick High School, 57 N. White Road.

The city is also running temporary evacuation shelters at the Roosevelt, Shirakawa and Mayfair community centers. Click here for the latest update on the city’s emergency weather alert landing page. To find out if your house is in a flood zone, click here.

By 5pm Tuesday, the city issued an emergency notice to areas prone to the next wave of flooding, including neighborhoods from Capitol Expressway to Highway 237. About 100 city staffers fanned out through the affected areas to distribute leaflets warning people that they may have to evacuate as the Anderson Dan reservoir continues to spill over and the river waters continue to ascend through late Wednesday morning. 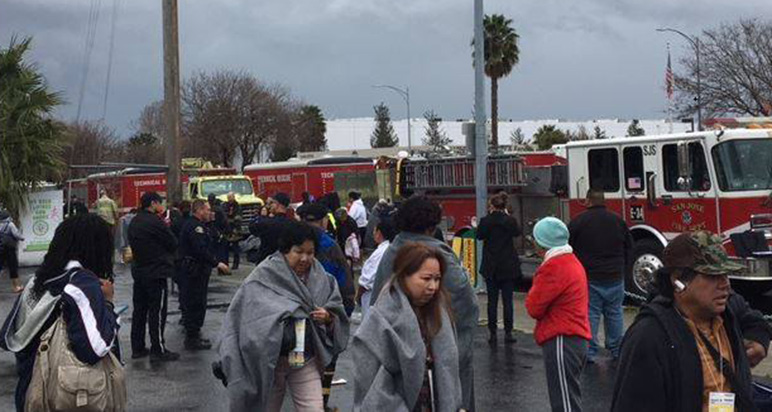 The Santa Clara County Office of Supportive Housing declared an inclement weather episode, which means an additional 292 shelters beds will be made available in various locations through Saturday morning. Sikh Gurdwara San Jose announced that it would open its doors and offer hot food to anyone displaced by the flooding.

VTA is assisting with these evacuations. Some buses will be taken out of service in other parts of town. minor service disruption expected. https://t.co/seOHWKq6UL

The Valley Transportation Authority (VTA) has been transporting people for evacuations, which may lead to some service disruptions. Other VTA bus lines were rerouted to avoid flood zones and road closures.

As people gathered their belongings and fled their homes Tuesday, emergency responders hosed down anyone who came in contact with the floodwater, which is coursing with gasoline, sewage, oil, chemicals and various other contaminants.

@SJFD stay clear of contaminated flood waters. If you are in the water let SJFD decontaminate you pic.twitter.com/EsULGJmERM

The Santa Clara Valley Water District has set up six sites for people to pick up sandbags, and the agency noted that there are 18 additional stations managed by local cities. One of those sites, however, has been closed because of the flooding. The closest alternatives to the blocked-off Senter Road and Phelan Avenue sandbag station are off of Mabury Avenue and at the Winfield Boulevard Warehouse.

The American Red Cross put out a call for volunteers who want to help evacuate buildings and relocate people throughout the city. The nonprofit’s South Bay office is located at 2731 N. First St., in San Jose. The Red Cross phone number is 877.727.6771.