UPDATE, Feb. 24: After days of searching, Irene Perez found her father in the vicinity of the creekside encampment that got washed away by the flood earlier this week.

Michael Amaya Perez lived along Coyote Creek for two years. The 56-year-old spent his nights in a tent and daylight hours at fast-food joints near Los Lagos Golf Course. But sometime after the storms came and the flood tore through low-lying parts of San Jose this past week, Michael went missing.

“I’ve looked everywhere, Irene Perez, his daughter, said Wednesday night. “When I saw the news and saw that they had to rescue people from the same place where my dad lived, I freaked out. I had the very first panic attack in my life.”

As the floodwaters began to subside, Irene left her home in Hayward to continue her search, which began about a week ago when a series of storms walloped the South Bay but took on more urgency when the rains gave way to riverine floods. She checked the parks around Los Lagos, the Burger King and the pop-up shelters and evacuation centers for flushed from their homes by the flood. Her father, she said, had no cellphone and may have had no identification on him. 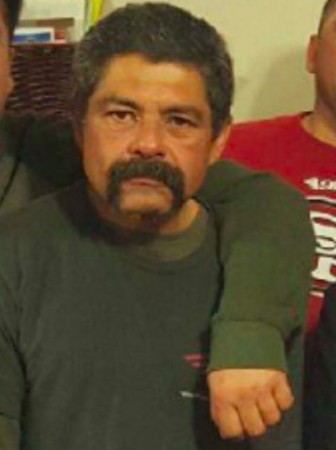 On Wednesday night, she waited in the gymnasium at James Lick High School, one of two overnight shelters set up for evacuees, as police and firefighters called local jails and hospitals to pinpoint her dad’s whereabouts.

“So far, nothing,” she said Thursday morning.

According to Santa Clara County’s Medical Examiner-Coroner’s Office, no fatalities from the flood have been reported. San Jose Police Department spokesman Officer Albert Morales said no missing persons reports have been attributed to the floods.

But family and friends of the homeless, many of whom had already been living off the grid, say some people are unaccounted for. Keith Saldivar, who lived on the streets for years before finding transitional housing in 2016, said he’s tried to find people who have been MIA since the recent storms and flood.

Outreach workers have been fanning the city to distribute supplies to people displaced from their creekside encampments. At the camp where Michael Perez lived and where the river cuts through a municipal golf course, some 40 to 50 people lost their tents when Coyote Creek surged four feet over flood level. Firefighters rescued five of them from the trees and dozens more who were left stranded by the rushing water.

In San Jose, where an estimated 1,500 people live along the local waterways, the homeless are already displaced multiple times each season. But this season, with local agencies dismantling their camps and the torrential rains on top of that, they have had to relocate far more frequently.

That added instability is concerning to people who conduct outreach to the homeless. Santa Clara County has already seen a huge uptick in the number of people dying on the streets. From 2015 to 2016, the homeless death toll doubled to more than 120 people.

Officials have yet to determine what caused such a dramatic increase. Saldivar said he believes the increase may be partly due to the forced relocations caused when the city and Caltrans dismantle homeless camps.

The average life expectancy for a homeless person is a little over 60 years, according to the National Coalition on Homelessness. For homeless people living outside, however, that expectancy is even shorter. In Silicon Valley, home to one of the largest populations of unsheltered homeless people in the nation, the added risks include pulmonary disease and exposure.

Forecasted below-freezing temperatures this week prompted the county’s Office of Supportive Housing to make 292 additional shelter beds available throughout the region. The Gilroy Armory Shelter and Boccardo Reception Center are available to adult flood evacuees. Since the start of the cold-weather months, 738 people have been served beyond the standard capacity at local shelters, according to the county.

The county’s cold-weather shelters managed by the nonprofit HomeFirst run from the end of November through the end of March. 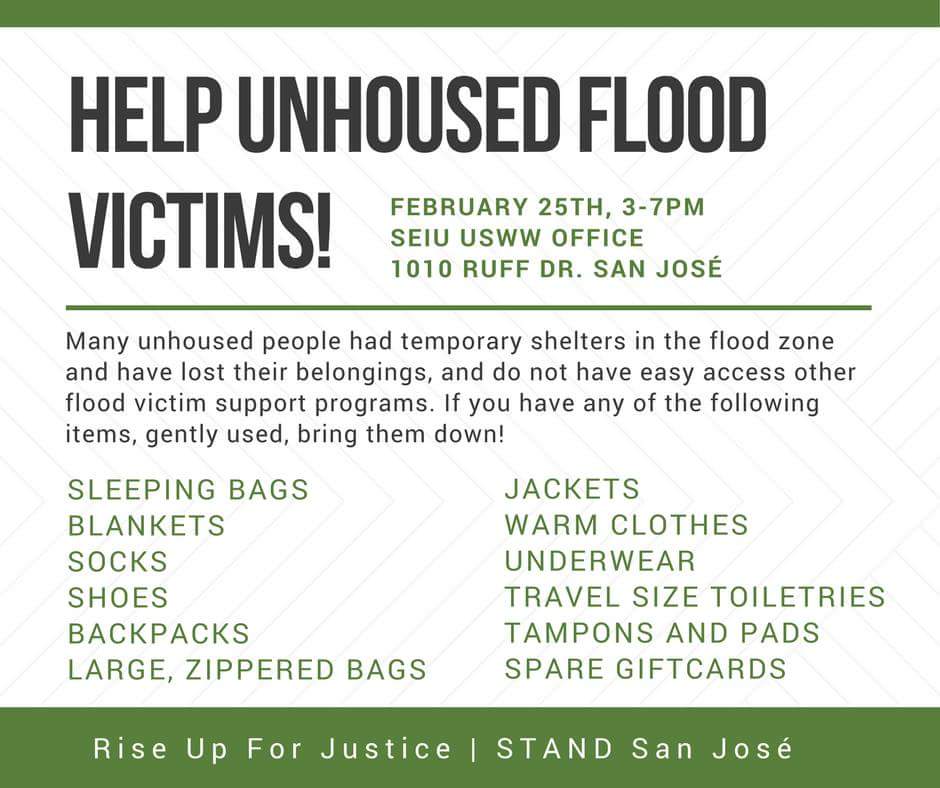 With the flood having forced 14,000 mandatory evacuations—now down to 3,800 people—and another 22,000 advised to do so, resources are stretched thin.

The forecast for rain this weekend is not supposed to be as bad as a few days ago, but city officials say they’re still operating in an ongoing emergency. But as of today, the evacuation numbers have been reduced to 3,800.

Donations for the homeless can be made through www.Homefirst.org or to the Winter Faith Collaborative here. Rise Up for Justice, a local coalition of community groups and activists, will stage a collection drive this weekend for sleeping bags, blanks, socks, backpacks and other items people may have lost in the storms. That event takes place from 3 to 7pm Saturday at the SEIU USWW office at 1010 Ruff Drive in San Jose.

Donations for all other victims of the flood can be made through www.sjmayor.org or www.siliconvalleycf.org/sjflood. For the latest information about the flood and where to find help, click here.