Downtowns where urban dwellers and workers mingle in what idealistic city planners call a “live, work, play environment,” have taken a beating during the pandemic. But South Bay developers and investors say San Jose still feels like a safe bet.

“The fundamentals of San Jose and the downtown real estate—which are really driven by the overall macroeconomic trends of Silicon Valley—the pandemic hasn't changed those,” Erik Hayden, founder of developer Urban Catalyst, said. “Downtown San Jose is still a great place to do … development.”

That’s not to say downtown isn’t in for a fight.

Before the pandemic, the core of the nation’s 10th largest city had scarce retail and a population that shrank dramatically at night. But it was also on the rise—literally—as the first new office buildings in a decade took shape, apartments opened and city officials pushed to elevate development height limits. Google drew up plans for a massive new campus and Adobe dug in on a new tower to add to its headquarters.

Then came the coronavirus.

Construction on most projects halted, storefronts shuttered, workers that normally buoyed the downtown economy and ate at its many restaurants stayed home. What little retail there was shrunk after the county issued its first shelter-in-place order.

Unlike in other metros, no development projects have died in the heart of San Jose, according to Blage Zelalich, the city's downtown manager.

Millions of square feet of office and retail space and thousands of residential units remain in the pipeline of projects—years-long endeavors that represent planners’ and developers’ optimism for what the city can become in a handful of years.

“In the short term, in the next 18 to 24 months, we have a challenge before us to ensure that downtown remains vital and people continue to come down and support the awesome businesses that we have,” Zelalich said. “But from a macroeconomic standpoint, so far we haven't seen the cracks.” 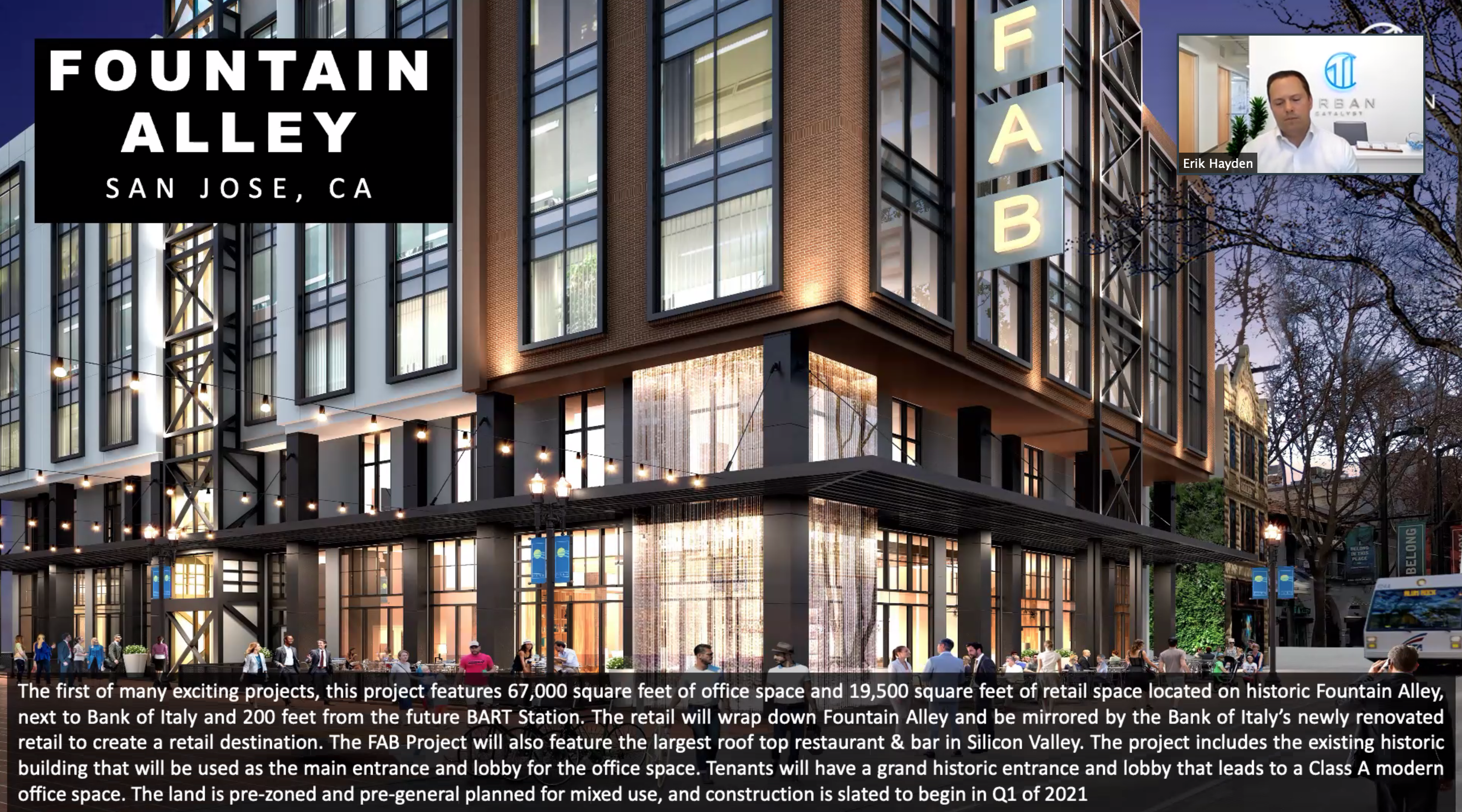 Erik Hayden, founder of downtown San Jose developer Urban Catalyst talks about the group's Fountain Alley Project, one of seven the company is working on. Image courtesy of Hoge Fenton

Among them: Matt Lituchy of Jay Paul Co., the group behind the overhaul of CityView Plaza and several other projects in downtown; Ted McMahon of Bayview Development Group, which is building the 28-story Miro apartment towers next to City Hall; and Hayden of Urban Catalyst, which is working on seven downtown projects.

Each has invested hundreds of millions of dollars in the city.

“We have a long term vision for downtown San Jose, and it isn't about next year or two years from now,” Hayden said. “It's about 10 years from now.”

In January Miro will start pre-leasing apartments meant to appeal to tech employees, including those that will eventually work in the offices rising in downtown, McMahon, the top investment officer for Bayview Development Group said.

But in a market that has seen almost exclusively tightening vacancies and rising rents in the past decade, the project is coming online at a strange time.

The number of empty high-end apartments in San Jose has jumped by 2.2 percent from a year ago, while rents decreased by 3.5 percent since March, according to brokerage company Marcus and Millichap. “We can endure it,” McMahon said. “There will be some short-term pain here for everybody.” 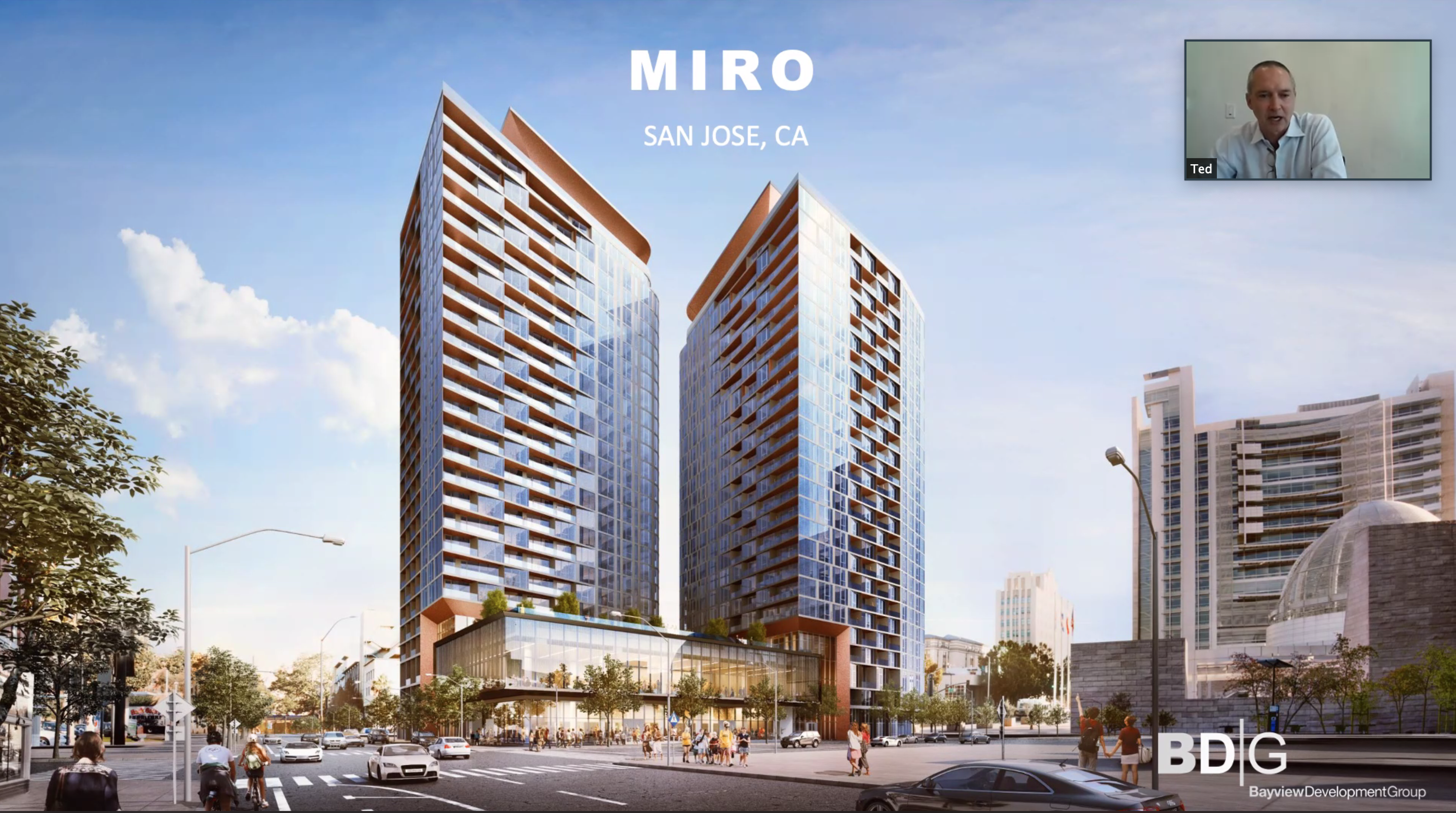 Ted McMahon of Bayview Development Group talks about Miro, the 28-story apartment tower project across from City Hall. The development is set to open early next year. Image courtesy of Hoge Fenton

Filling the 15,000 square feet of retail space on the ground floor along Santa Clara Street will be harder, McMahon said.

“We are responsible for the built environment and creating some nice spaces,” he noted, “but I do worry about some of that activation downtown, which is a little bit tougher and feeds into peoples’ desire to live in an urban area.”

The study echoed what developers say about the urban core: that the next two years will be hard, but San Jose will bounce back, likely faster than many other metros. In the meantime, the SJDA can position itself as “the leader in nurturing the storefront economy downtown” in the coming years.

“There really needs to be a reckoning for the landlords and their tenants about if they want to keep tenants, how that is going to work,” SJDA Executive Director Scott Knies said. “Because we’re limited on how much business we do, and nobody knows how long it's going to be before we get back to adding more businesses.”

The way Zelalich describes it, where the office buildings and homes rise, retail will follow.

“Retail has always been a challenge in downtown,” she said. “The old adage is that retail follows rooftops, and so we've been working for many years on the rooftops.”

For now more offices, homes—and their rooftops—are on the way to San Jose.