David Kinch has one piece of advice for aspiring restaurant entrepreneurs looking to launch their own ventures right now: “Don’t.”

“Just find the wherewithal and the resources to wait until this is all over,” says the Michelin-starred chef who made his name with Los Gatos’ Manresa. “I’m a big believer that things can't get back to normal until a vaccine, or until the pandemic is under control. Otherwise, we’re just going to be chipping away at something that will continue to gnaw at us and continue to hurt us, like it has for the past several months.”

Kinch knows firsthand how the coronavirus pandemic that hit the Bay Area earlier this year has hurt restaurants and communities. Despite those hardships, dozens of restaurants have opened in the region since the pandemic-induced lockdowns started in mid-March—and Kinch owns one of them.

Mentone, a casual Italian eatery serving specialty pizzas, pastas, wines and cocktails in Aptos, is his latest endeavor. Though it’s served food for months, it has never formally opened because it launched just as the county ordered indoor businesses to close.

Like his other restaurants, including the three-Michelin starred Manresa and Bywater in Los Gatos—as well as Manresa Bread, which has locations in Campbell, Los Gatos and Los Altos—Mentone has been getting by in large part with takeout orders.

But it hasn’t been easy, a fact that is apparent in Kinch’s voice when he talks about the last eight months. “It's really a terrible, terrible time right now,” says Kinch, who has worked in the Bay Area restaurant scene since 1988. “I just hope that the issues are dealt with and at some point in time we can return back to the way things used to be.” 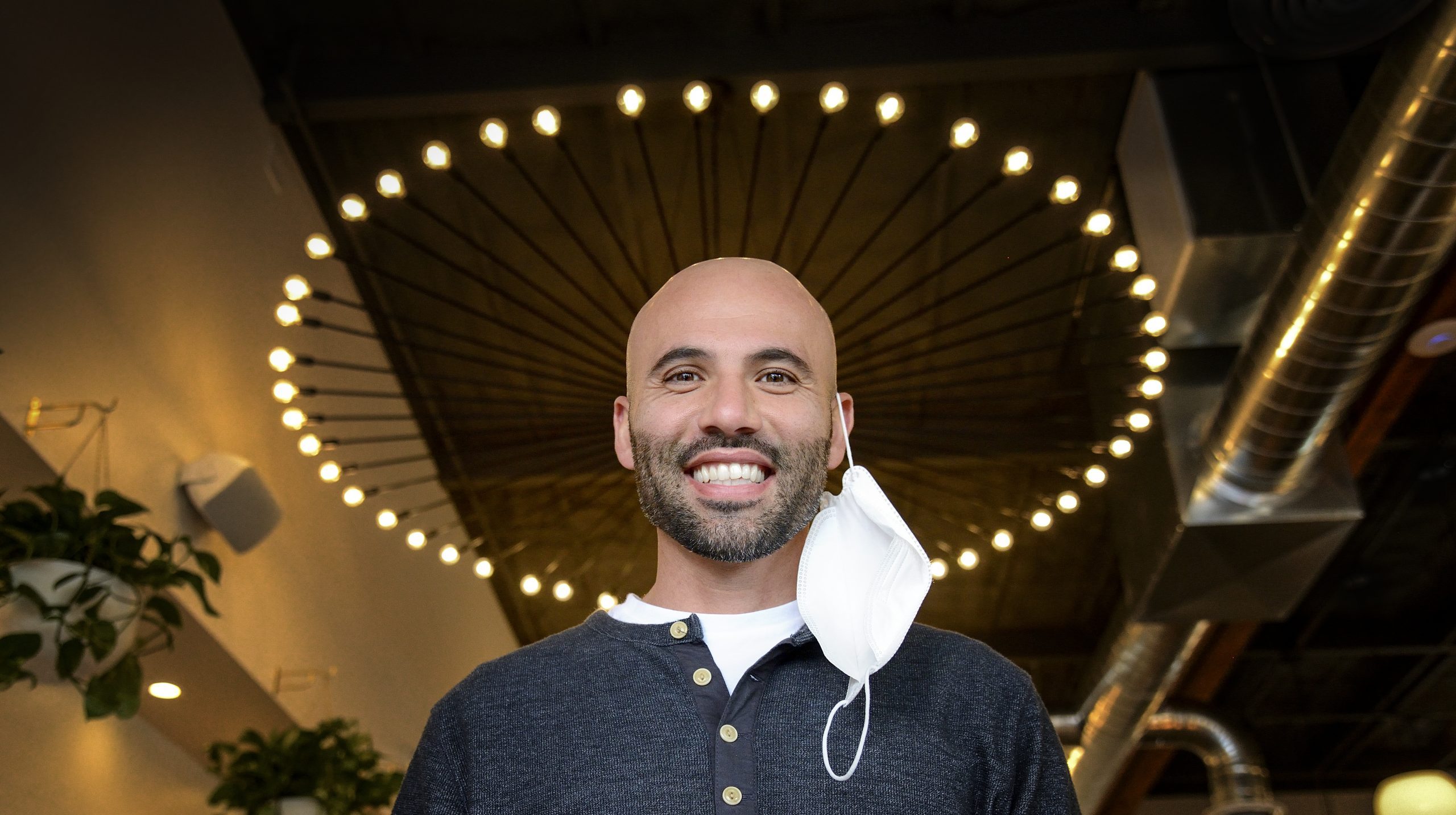 BUDDING BUSINESS: Reza Manion opened Bloom Eatery in Santa Clara last week and the first-time entrepreneur is just grateful not to be alone in his efforts. (Photo by Greg Ramar)

That’s the hope that more than 100 brand-new restaurants or other kinds of businesses serving food across Santa Clara County are working through.

Between March and mid-November this year, 131 new permits to serve food in a facility were issued by the county’s department of health, according to inspection data provided by the county. That number is exactly halved compared to the same timeframe in 2019, according to the data, showing that the pandemic may have made many—but definitely not all—restaurant owners shy away from opening their doors.

Meanwhile, across Santa Clara, Monterey, Santa Cruz and San Mateo counties, 254 new applications for permits for a license to serve alcohol were submitted to the Alcohol Beverage Control agency this year.

Though there is still more than a month left in the year, that number represents less than half of the 533 permit applications submitted for similar types of businesses in 2019. Still, restaurant owners are pushing forward and hoping for the best, despite, well, everything.

Reza Manion is among those, having opened Bloom Eatery in Santa Clara just last week.

The restaurant’s debut marks the start of his first business and he’s preparing for an uphill fight to keep it afloat over the next few months as the region goes back into lockdown mode due to newly skyrocketing Covid cases just in time for the rainy season.

But Manion is taking comfort in the fact that he’s not alone. Before ever diving into those worries about the coming months, which every restaurant owner in the country is facing, he first breathes a sigh of relief as he absorbs the news that many others are currently doing the same thing he did last week.

“It makes me feel better that there's other people that are crazy enough to launch a restaurant other than myself in a pandemic,” he says with a laugh. “I just feel great, because there's people like me doing it—I wasn’t aware.”

Bloom, a breakfast and lunch bistro, was Manion’s way of “building something and embedding it into the community” after learning the business from working at his mother’s successful Santa Clara eatery, Sara’s Kitchen.

“I grew up in a diner and we've built so many relationships through our community,” he says. “You see people come in and enjoy themselves and that's just a special thing.”

He’d already started hiring staff and gutting the leased building along Saratoga Avenue, the former home of the Golden Mushroom Pizzeria, for the eatery when the pandemic hit earlier this year. Unwilling to give up on the progress he’d made in what now seem like heady days before the coronavirus hit the U.S., or the employees he’d hired, he nervously pushed the doors open last week.

Now he has to make tough choices about where to save and where to spend to draw customers in. His patio can seat 12, but with the cooler weather, fewer people want to sit outdoors. Buying and installing a structure to break the wind or tracking down extra heat lamps—which have become a rare and hot commodity in the past month—would be an investment that may or may not pay off.

“Either you keep your overhead down, your employee [count] down and try not to spend too much and maintain,” he says, “or you go big and build this beautiful, elaborate thing that people will come to and just hope that the revenue can take care of all the expenses.” 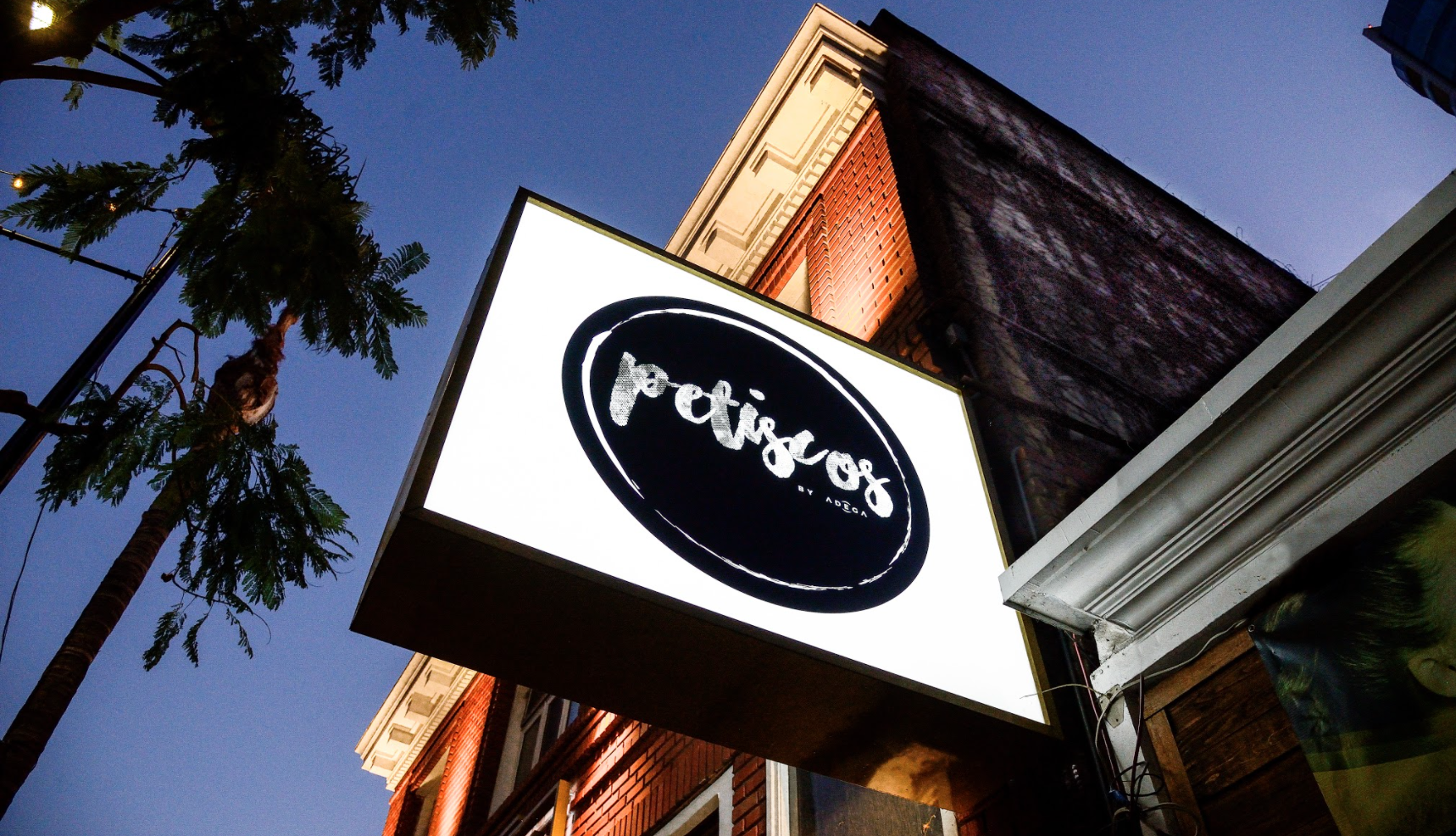 But there are a few perks of opening a restaurant during a pandemic, Carlos and Fernanda Carreira say. The South Bay power couple are behind the highly rated restaurant Adega and bakery Pastelaria Adega in San Jose, and are preparing to open their newest restaurant in downtown San Jose, Petisco’s, which will be a casual, tapas-style Portugese restaurant.

Despite the pandemic, Petisco’s has been the simplest of the bunch to get off the ground when it comes to government red tape, Carlos Carreira says. “In the past, when things were running normally, it was always a headache, always there was something: always something missing, a signature missing or always something that needed to be done,” he says. “But now things have changed dramatically—that’s been my experience.”

Adega remains shuttered during the pandemic because it doesn’t make business sense to open a fine dining restaurant with limited indoor dining options, the couple says. But they decided to open Petisco’s this year because, though it may be hard in the short term, they believe it will set them up for success in the long run.

“It’s a business bet—we are betting on the future, that five years from now, 10 years from now downtown [San Jose] is going to look different, it’s going to feel different, and moving our businesses into downtown now will be a good bet,” Carlos Carriera says.

In fact, the two see so much potential in the city’s urban core, they now live in downtown, an area they say feels “genuine.”

Indeed, downtown San Jose’s growth was gaining momentum before the pandemic, and though the streets are currently relatively empty and quiet, major developments and projects still seem to be moving toward a long-term vision that—if successful—could turn the city’s urban core into a taller, denser downtown, possibly with a new landmark structure that tourists pose for pictures in front of for social media clout.

In the meantime, the city—like many others in Silicon Valley—has worked hard to help keep restaurants afloat by relaxing restrictions on outdoor dining, curfews and to speed up internal processes for businesses.

Part of that is San Jose’s Al Fresco program, which allows eateries to expand outside onto sidewalks and into parking spots to offer more outdoor seating.

The effort to help keep restaurants afloat has taken the cooperation of nine city departments to essentially let the businesses expand and worry about solving any problems with permits later, Blage Zelalich, the city’s downtown manager says.

And while it hasn’t been a perfect solution for all businesses, many restaurants would like to see the programs that have shut down some streets to traffic and allowed expanded dining space to continue beyond the pandemic, she says.

“My guess is that some of this stuff is going to stay,” she says. “We’ve got great weather, and that’s one of the benefits of San Jose: being able to be outside.”

Another added benefit of opening a restaurant now, however bittersweet, Fernanda Carreira says, is that for the first time in a long time, cooks and waiters in the market are looking for work. That’s what Brenda Buenviaje is finding, too, as she prepares to open her first outpost in the South Bay after 13 years of running Brenda’s French Soul Food in San Francisco and Oakland.

“We are getting more applications than we had back a year ago, when there was a mass exodus of working class folks leaving the Bay Area because they couldn’t afford rent,” Buenviaje says. “So we’re not dealing with zero resumes anymore, it’s more just kind of figuring out what the best fit is for us.” 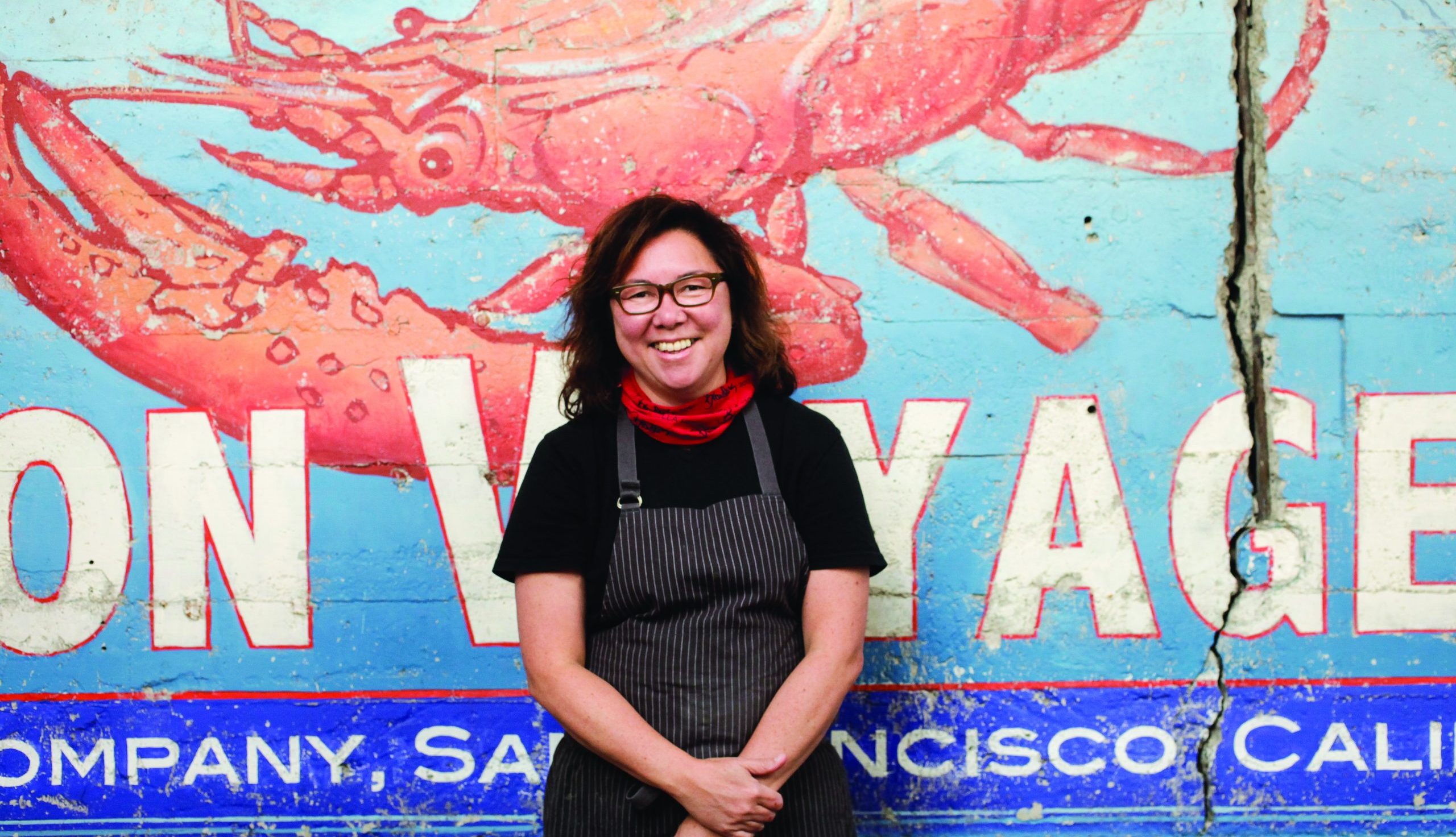 Buenviaje, who grew up in New Orleans, agrees with Kinch that right now is a terrible time to try to open a restaurant.

But when business at her Polk Street location, near San Francisco’s Civic Center, dwindled because the tourists and workers that normally made up the bulk of her 500 or more orders a day stayed home, she knew she needed to do something.

“The thing that occurred to me was, like, ‘OK, if people aren't coming to us to eat, then I need to figure out a way to bring the food to them,’” she says.

If one is looking to go to the people, then San Jose isn’t a bad place to land. The city has long been trying to get away from its station as “a bedroom community,” where the population grows at night when people come home from their jobs on the Peninsula and in San Francisco. City officials have lamented that jobs-to-housing imbalance as a major part of the city’s budgetary constraints while surrounding cities maintained an opposite ratio with more tax-producing jobs than homes.

Little could San Jose officials have predicted that its home-heavy makeup may be the very thing that makes it now stand out as the place to be for businesses like Buenviaje’s.

Instead of buying a building or leasing up a whole retail storefront, Buenviaje plans to open her new soul food eatery featuring some of her “greatest hits” in San Francisco and Oakland in a San Jose takeout-and-delivery-only CloudKitchens location.

CloudKitchens is a relatively new model founded by Former Uber Technologies CEO Travis Kalanic that caters to companies looking for affordable spaces to prep and cook food specifically to-go. Essentially, it lets a single building be home to many companies with some shared kitchen amenities, ideally lowering overhead costs.

That’s what drew Buenviaje to the location when CloudKitchens approached her, because opening a standalone restaurant seems “nutty,” right now, she says. Her San Jose spot is tentatively set to open in January, and she’s already hiring and curating the staff.

But regardless of how restaurant owners are opening their doors during the pandemic, their message to customers is the same: if they build it, they need the people to come. Otherwise, when the virus eventually recedes, residents will emerge from their homes only to find that there is little left of the places that help breath life into communities.

“Independent restaurants are in dire, dire shape. We’re not getting any kind of help from the government in any kind of way—we’re kind of being left on our own to deal with this,” Kinch says. “I think large swaths of the American public are starting to realize how important independent restaurants are to the social fabric of the culture of our country. It’s gonna be a real shame if a lot of them leave, or are gutted—and unfortunately, that's what we're seeing happen right now.”