A few weeks ago, Jennifer Echeverri thought about selling her San Jose home to keep Habana Cuba, her restaurant of 19 years, afloat in the wake of the Covid-19 pandemic.

Now that option has been pushed to the back of her mind, as Santa Clara County has begun to open back up. Local businesses are ordering catered lunches again, and more people are visiting her eatery inside the SoFA Market in downtown San Jose, she says.

“We’re seeing people starting to finally come out of their shells,” Echeverri says.

Santa Clara County returned to the “orange tier” of the state’s Blueprint for a Safer Economy on March 23, meaning state-imposed restrictions on indoor operations and capacity limits suddenly loosened. With that, restaurateurs breathed slightly easier as half of their indoor dining rooms suddenly became money-making spaces again. A week later, San Jose council members extended through 2021 the city’s “al fresco” outdoor dining program, which allows tables to spill onto sidewalks, parking spaces and across some streets to create more dining spaces.

The indoor dining allowance hasn’t technically changed much for some restaurants, like those in food halls such as the SoFA Market and San Pedro Square Market, or even for the eateries at the busy retail and dining hotspot Santana Row, where outdoor seating has been plentiful through the pandemic. 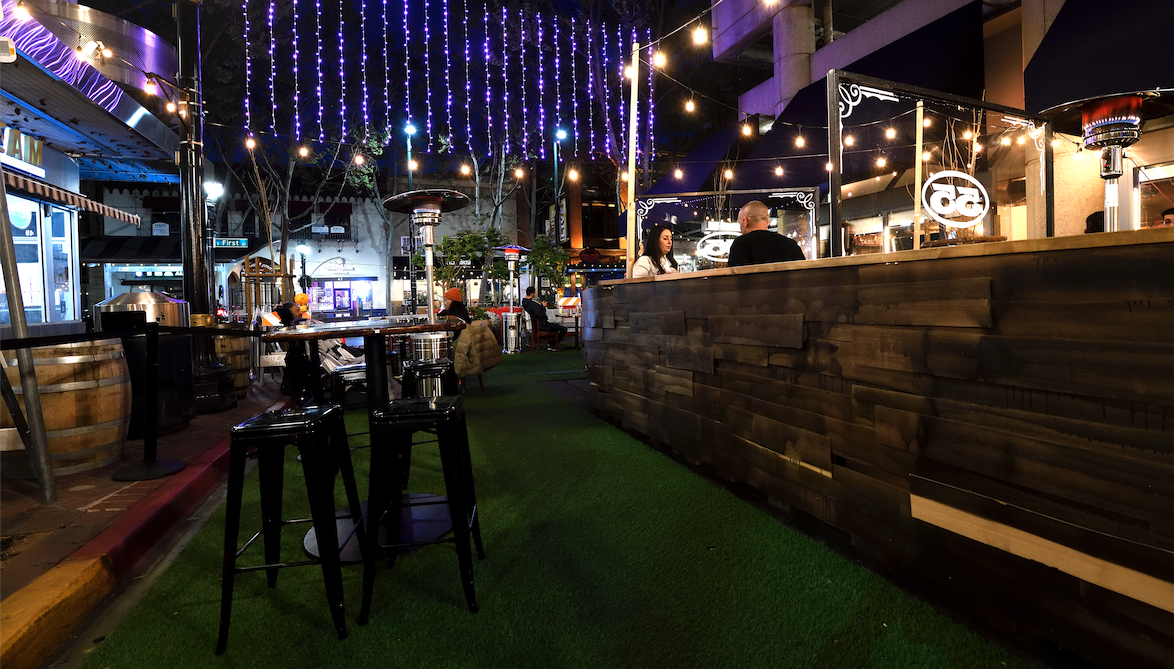 ALL ABOARD Restaurants like 55 South in downtown San Jose have created large outdoor dining and drinking spaces that spill onto sidewalks and into roadways during the pandemic. (Photo by Greg Ramar)

But the loosened restrictions, paired with the past month’s warmer weather, has made a big difference for customers, and many South Bay restaurant owners say they are returning in force.

“When you look at the SoFA district in general… [traffic] has been pretty remarkable,” says David Ma, SoFA Market’s general manager. “It seems like the general attitude, people are feeling a little better and a little safer, especially with vaccinations going up.”

The food hall’s seven restaurants and bar would typically rely on downtown conventions and street festivals for foot traffic. And while some of the outdoor events are beginning to return—including an art walk on the first Friday of every month—large events remain outlawed.

Even so, business is up by 10% to 15% at the SoFA Market. That’s still not much compared to sales pre-pandemic, Ma acknowledges, but it’s an improvement he’ll take nonetheless.

Serena Harkey, wine director and sommelier for Left Bank Brasserie, has watched more customers return to Santana Row’s 37 eateries in recent weeks, as well. The mixed-use shopping district was among the first in the South Bay to ramp up its outdoor dining setup, a task made easier because its streets are largely privately owned and therefore subject to fewer permitting requirements to close off.

“We’re incredibly fortunate to be on Santana Row, they’re the most amazing landlords,” Harkey says. “They put in so much money themselves to provide tenting, heaters, decorations … Santana Row paid for all of that.”

Indeed, those kinds of purchases were tough costs for many restaurateurs to swallow as business dipped during the cold and rainy months. A rush on outdoor heaters late last year made it even harder to take the financial plunge.

But that help from Santana Row owner Federal Realty Investment Trust let Harkey and the team at Left Bank focus on patrons and its staff, offering family meals and health insurance assistance, Harkey says. Now, as business ramps back up, and diners fill indoor and outdoor tables, Left Bank is battling the potentially higher risk of Covid-19 transmission by following all of the safety protocols mandated by the state and county, Harkey says.

“The public is very excited to come out to eat—I think it’s the fastest emotional transition into having a feeling of normalcy,” Harkey says. “Our staff is very diligent that everything is being abided by… just because the vaccines are coming out doesn’t mean everybody is vaccinated and vaccination also doesn’t mean immunity.” 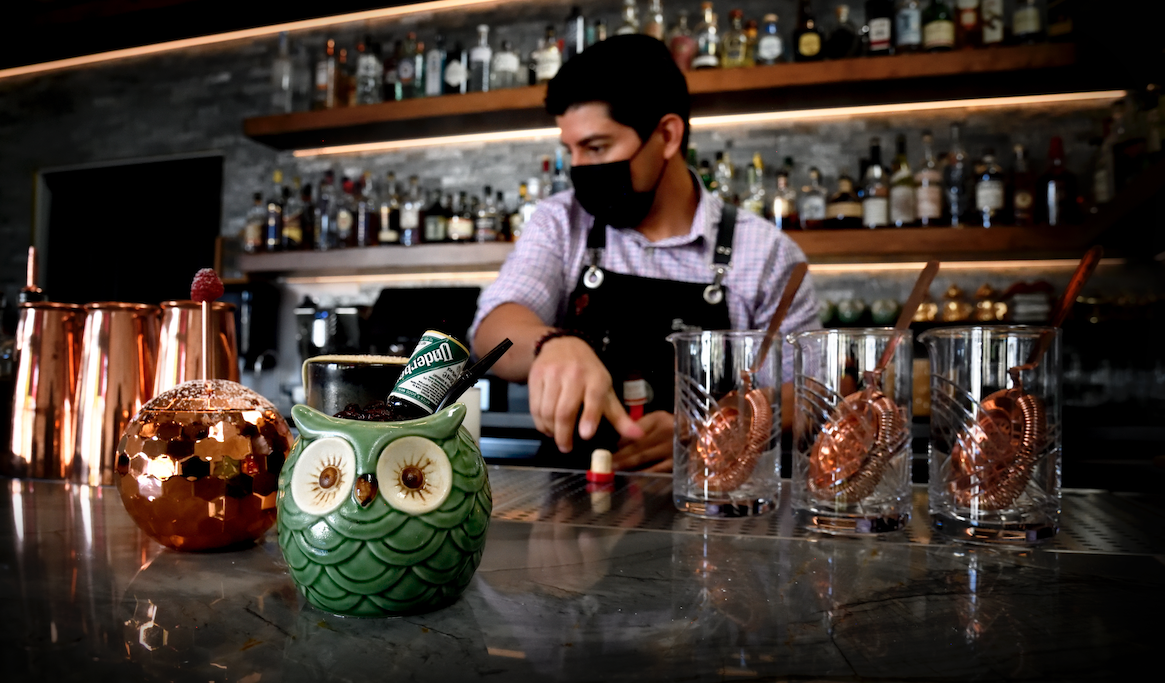 BOTTOMS UP Los Gatos Soda Works is serving its colorful drinks to-go or on its patio as restrictions continue to loosen. (Photo by Greg Ramar)

For some restaurant owners, however, the changes haven’t been enough.

Acclaimed chef Jeffrey Stout in early February opened BE.STÉAK.Ă in Campbell’s Pruneyard shopping center following years of planning and construction. He was optimistic his new steakhouse would persevere by offering dishes that don’t end up in to-go boxes and don’t cost an entire paycheck.

“My mindset is, ‘Let’s try to launch this restaurant the best we can in the worst of times,” Stout said at the time.

Today, Stout says he doesn’t know what the future holds. The three-time Michelin-rated Silicon Valley chef estimates about 60% of people are still not venturing into eateries, which is devastating to the restaurant industry.

“With regard to opening indoors, it really doesn’t matter if it’s 25%, 50% or 75%, the limiting factor is the distance between the tables,” he says. “That’s really the defining factor of whether we can make restaurants whole again.”

Stout has watched restaurant workers leave the industry over the last year, and understands their predicament—they need to feed their families, and, right now, “there’s no money in restaurants.”

“We’re looking at a depleted restaurant employee pool, and then every restaurant has been told to hire at the exact same time,” Stout says. “That is a limiting factor, too—not having enough staff just to handle business.”

BE.STÉAK.Ă has two outdoor heated and wind-sheltered patios with seating for up to 60 guests. (Photo courtesy of BE.STÉAK.Ă)

While the loosened restrictions and warm weather have given many restaurants a needed boost in recent weeks, other new or growing problems have surfaced over the past year and worsened during the pandemic.

In downtown San Jose, the number of unhoused neighbors that have taken up residence along First Street has skyrocketed.

“We’re very supportive and compassionate about the unhoused situation, but it’s been bad,” Ma says. “We’ve had some graffiti issues, damage issues—actually, our current al fresco tent, someone tore down half of it. There are still challenges, and some of our neighbors have expressed the same concerns.”

Late last year, longtime downtown eatery Chacho’s shuttered its San Jose location for good, in part because of the growing homeless population and vandalism, according to Jorge Sanchez, an owner of the restaurant and bar.

The restaurant’s storefront was damaged last summer during the nationwide protests over police brutality, following the murder of George Floyd by a Minneapolis policeman. Then came the break-ins as the homeless population in the area grew, which also made it less hospitable for patrons, even when outdoor dining was allowed, Sanchez said.

“It’s just a world of hurt,” Sanchez said at the time. “There’s a lot of homeless around here and they’re struggling. There’s a lot of addicts, there’s people that are trying to find food for their families, for themselves, as well as shelter.” 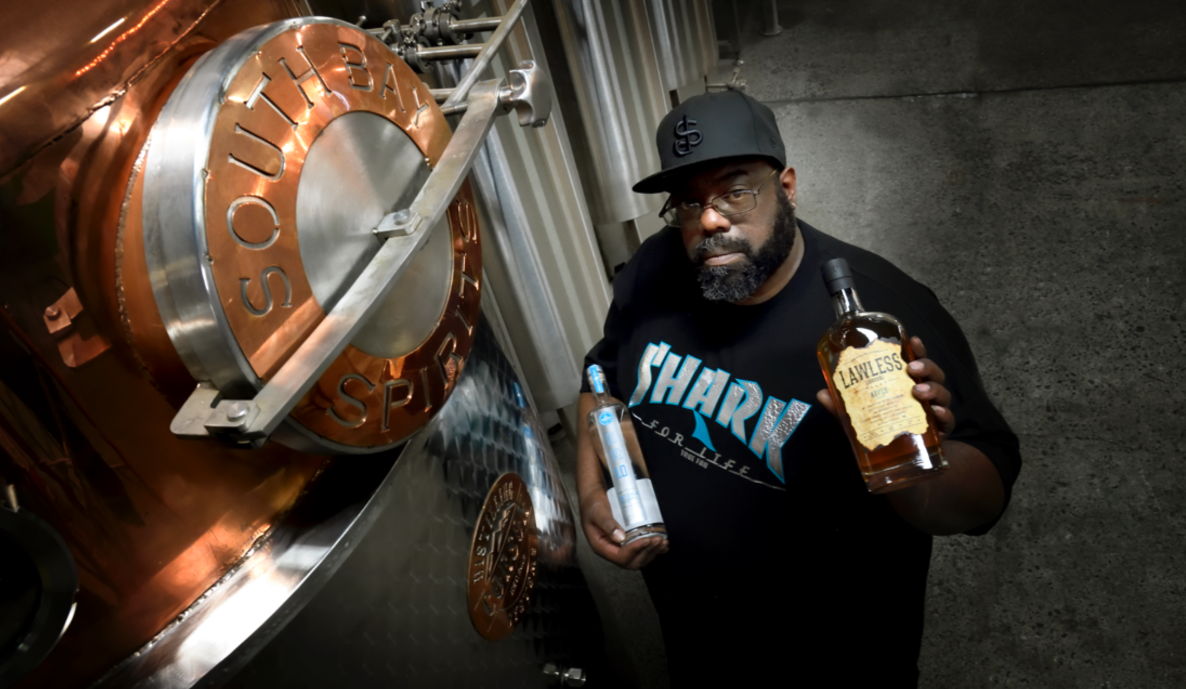 JUST A DASH South Bay Spirits' owner Eric Roberts says the distillery's apple liqueur is a good baking buddy—to drink or put in a dish. The distillery started making hand sanitizer during the pandemic, an effort to help with shortages and keep the business afloat. (Photo by Greg Ramar)

Then there’s the growing number Covid-19 variants making their way to the Bay Area and casting a cloud of uncertainty over the future. If those variants cause a spike in cases, cause fewer people to venture out or induce more strict lockdown orders, that will be devastating for restaurants, Ma says.

“Nobody’s making a ton of profit, that’s for sure,” Ma says. “If it remains like this in about four months, it won’t be a positive. These next few months are going to be very imperative in terms of letting us know what the future forecast is.”

Echeverri is optimistic, though. She thinks the vaccination rollout will help her business and others sooner than originally anticipated.

Stout, however, says the only thing that can push the industry forward is reopening and those changes need to happen even more quickly than they currently are to ensure many restaurants’ longevity.

“We need more people going out, having the courage to trust and go to restaurants,” Stout says. “The only thing that will change is when people feel safe enough to go out and when spacing can be reduced.”