San Jose’s tenant protection laws have been undermined by political compromise as well as a lack of enforcement, staffing and oversight. That’s the takeaway from a new audit up for discussion at Tuesday’s City Council meeting.

Last April, the council voted to cap yearly allowable rent hikes from 8 to 5 percent. Critics of the move asked tenant advocates to meet them halfway, so, a couple months later, they added a provision to let landlords skirt that new ceiling under certain conditions. Basically, for each year they didn’t raise rent, property owners would be able to “bank” up to 10 percent and later increase it up to 8 percent.

According to City Auditor Sharon Erickson, however, that workaround renders the local rent control ordinance largely ineffective. It also adds prohibitive complexity for city staffers enforcing the rule and mom-and-pop landlords trying to calculate their eligibility for the exemption.

“In light of the modest benefits compared to the burdens and costs associated with banking, we recommend the City Council should consider eliminating the banking provision in the final ordinance,” Erickson concluded in her report.

Councilman Don Rocha agreed, adding that he’s been saying that all along.

“At the time the council directed staff to pursue the 5 percent with banking model, the decision was portrayed by some as a ‘compromise’ that balanced the needs of tenants with the needs of landlords,” Rocha wrote in a memo. “I disagreed with that sentiment at the time, and with the benefit of the auditor's analysis I think it should now be clear to everyone that the council action was not a compromise and does not represent the interests of tenants.”

In the auditor’s calculations, the 5 percent increase coupled with the banking provision would have limited rent increases only once in the past 15 years. She included the illustration below to illustrate how if the existing banking allowance had been applied between 1980 and 2014, landlords would have been able to passively build up a reserve when market growth was less than 5 percent and then used those banked credits to up the rents beyond the 5 percent limit during market spikes. 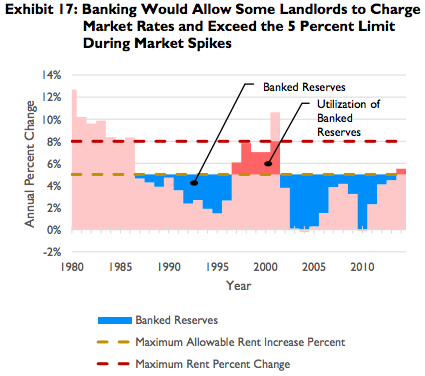 An ordinance with such a negligible impact could not honestly be called a compromise, Rocha added in his own memo.

“We should not find it acceptable to go from the previous rent ordinance, which was not effective in protecting tenants, to a new rent ordinance, which will also not be effective,” he wrote. “The whole point of this exercise was to help protect folks who are vulnerable in our community, and I think we have an obligation to ensure that we achieve that goal—not just in appearance, but in reality.”

Mayor Sam Liccardo and Councilman Chappie Jones authored a joint memo expressing hesitation about eschewing the banking provision and questioning the auditor’s authority to suggest such a change.

“We hesitate to adopt a novel process, putting the auditor in the role of appellate court to the City Council, such that policy reversals are urged even before the policy has been implemented,” they wrote.

Erickson’s report also pointed out that the city’s enforcement efforts are extremely underfunded and understaffed, which also limits its effectiveness. Meanwhile, lax standards for verifying certain eligibility exemptions for landlords as well as confusing language in some parts of the ordinance has allowed property owners to violate certain rules with impunity.

Erickson also pointed out a more fundamental problem with the city’s rent control ordinance: the fact that it’s tied at a flat rate, unlinked to the market.

“Landlords operate in a rental market, and their increases are limited by market rents,” Erickson wrote. “Our modeling shows that relying on a flat percentage to limit annual rent increases has the benefit of cutting rent spikes during periods of high inflation, but does not necessarily result in lower housing costs for tenants over the long term.”

Again, a chart to prove her point: 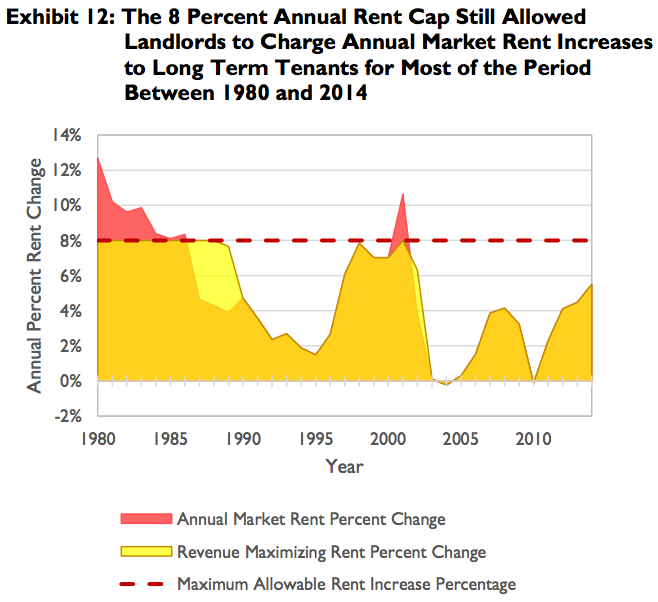 A rent cap that exceeds what the market would bear in most years does little to protect the most vulnerable tenants, Erickson pointed out in her report. It’s also important to realize that San Jose is one of only a few California cities to use a flat percentage, she added. Most jurisdictions reviewed for the sake of her audit tie rent limits to inflation. 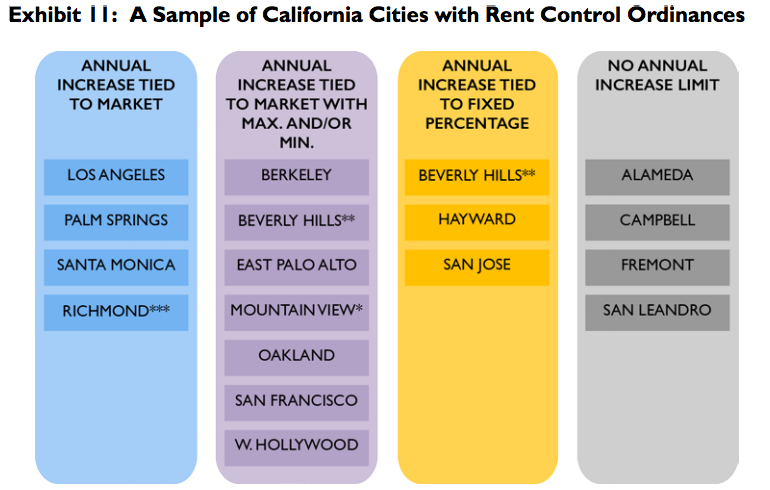 A number of laws limit the effectiveness of local rent control measures. Foremost among them is the landlord lobby’s landmark Costa-Hawkins Rental Act, which limits rent control laws to units built before 1995. San Jose further restricted the efficacy of any local tenant protections by deciding that any rent control measures would only apply to units permitted before 1979. That leaves slightly less than 46,000 units in this city covered by the 5 percent ceiling.

Rocha repeated a proposal he brought up last spring: expand the rent control ordinance to duplexes built within the allowable timeframe. That would bring another 10,000 units under rent control protections.

Later this year, San Jose will consider expanding tenant rights to include a “just cause” measure requiring landlords to give tenants a reason for evicting them. It’s pretty unusual for a major city to lack that kind of protection. The city also plans to consider anti-retaliation measures and how to deal with displacement when landlords decide to opt out of rent control by selling off the property.

More from the San Jose City Council agenda for January 31, 2017: