The former vice mayor of San Jose fell 365 votes behind Ash Kalra—with 52 out of 221 precincts reporting.

“Oh my gosh, it’s so close,” she exclaimed, and it would remain so for the next few hours. 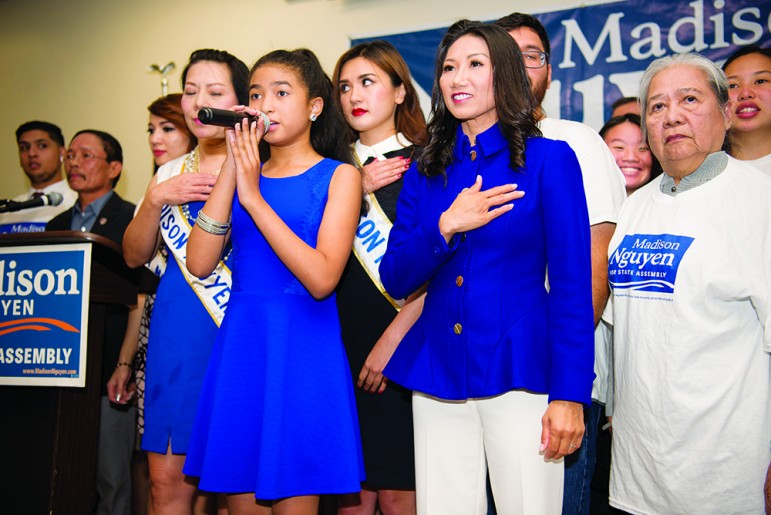 Luckily, there were slushie machines with margaritas and what the bartender referred to as “some orange kind of alcohol” to ease the tension and medicate the shadow of some orange kind of Elephant in the Room. After all, weed legalization wouldn’t take effect until midnight, four long hours away.

Broadcaster Bob Kieve, looking damn good in a bow tie at the young age of 94, predicted “it will be a terrible four years,” saying Donald Trump lacked the qualities one should look for “in a public servant—or a human being.” He should know. Kieve worked as a White House speechwriter for President Dwight D. Eisenhower and can remember the 1928 race between Herbert Hoover and Al Smith. 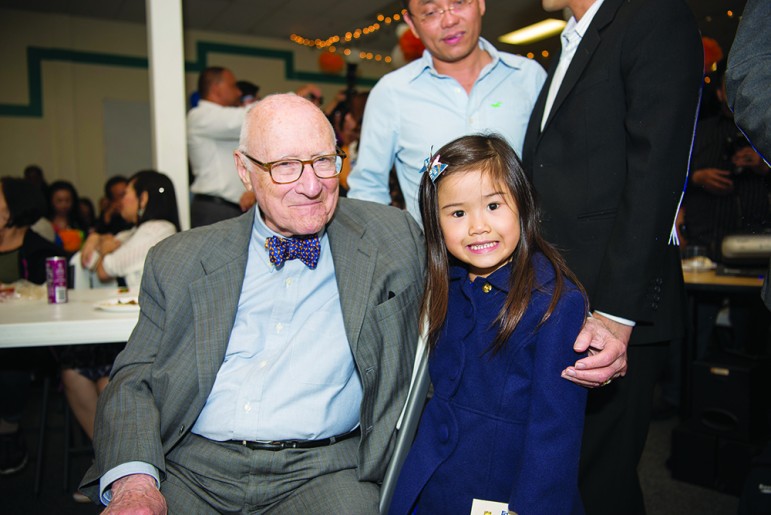 Kalra briefly distracted himself from the tension of the dead heat by dancing to a live band at his campaign headquarters off Capitol Expressway. The soundtrack of “Uptown Funk” drowned out any conversation about Trump becoming the next commander in chief. Kalra’s campaign manager, Shay Franco-Clausen, took a break from the party inside the strip mall office to get some fresh air.

“This has been a really great campaign,” she said. “That’s despite the aggression we experienced.” A member of the Nguyen camp was accused of throwing wet ramen noodles on the windows of Kalra’s campaign office. “Three times,” Franco-Clausen said, adding that signs also routinely went missing. 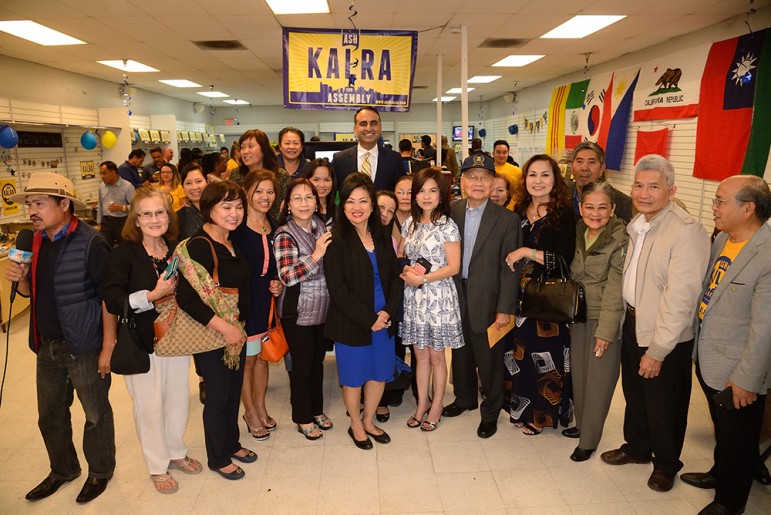 Ash Kalra (center) tallies with his supporters in a race that remained too close to call Tuesday night. (Photo by Greg Ramar)

Kalra, wearing a sleek blue suit with a yellow-and-black necktie, shrugged it off. “You just put out some more signs,” he said.

Trailing his opponent by 49 votes hours after the counting began, he looked a little uneasy. “I wish they’d update the results,” he said. A few latecomers popped in once the band left, including county Supervisor Dave Cortese and Kalra’s City Council colleagues Raul Peralez, Tam Nguyen and Manh Nguyen.

At Fremont’s Royal Palace Banquet Hall, we sneaked down a service hallway where Ro Khanna sat quietly in a room of gilded armchairs with his wife, Ritu. About to deliver a victory speech after beating Mike Honda to become Silicon valley’s newest congressman, Khanna granted a short interview before being interrupted by a congratulatory phone call from a supporter. “We’re going to win. Sixteen points,” he assured the caller.

Khanna admits he’ll have some cachet in Congress after defeating a once-powerful incumbent, and because he’s been “branded as a tech candidate. That’s a huge responsibility, a huge honor.” As a member of the House’s minority party, Khanna said, he’ll be willing to reach across the aisle and engage in bipartisanship. But he doesn’t entertain any illusions. “Candidly, I think it’s going to be very divided going into Congress,” he said. “There’s going to be great division. I think what is pretty important is to articulate the progressive vision for this country, in contrast and in opposition to Paul Ryan and Donald Trump.”

Khanna praised Honda’s service and his advocacy on behalf of minorities and transgendered communities. “I plan to reach out to him, extending friendship and respect,” Khanna said. 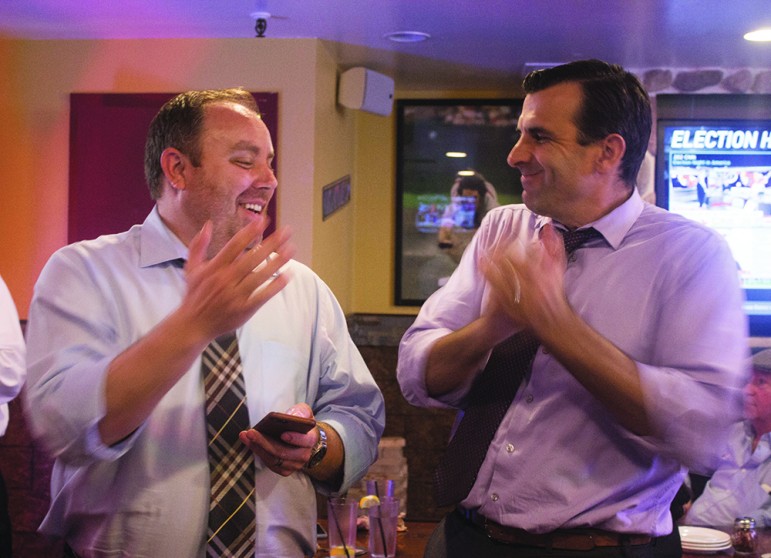 Lee Wilcox (left) and San Jose Mayor Sam Liccardo were feeling good about the direction of the city. (Photo by Taylor Jones)

In one of the more bizarre election night parties in recent memory, San Jose Mayor Sam Liccardo and his council colleagues joined Police Chief Eddie Garcia, as well as members of the Police Officers’ Association, at Rookies Sports Lodge to cheer on Measure F, the city’s pension reform settlement. When the first wave of results came in, Liccardo began to shout and cheer before high-fiving Garcia.

Unlike his 2014 mayor's race against county Supervisor Cortese, who didn’t concede until a few days after the election, Liccardo said he would hold off on going to bed Tuesday night to track results online. 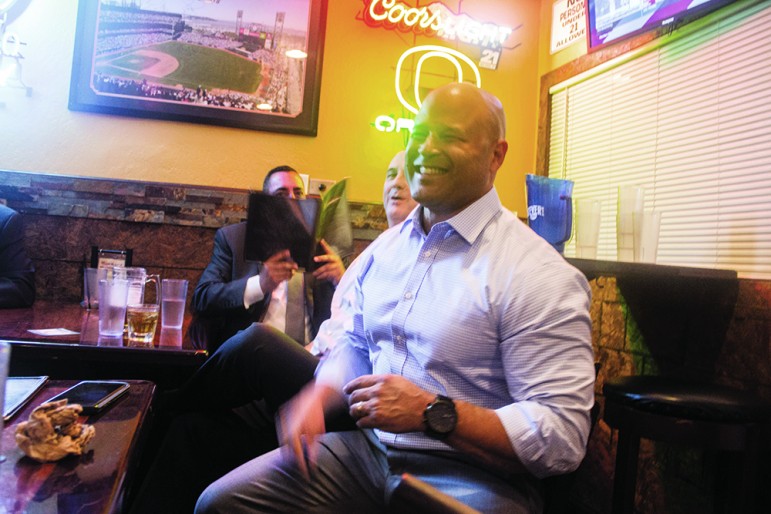 Also ready to stay up late were Trump’s faithful, who waited for the outcome in a spacious warehouse at the end of a dark court in Sunnyvale. About an hour before the first polls closed, about 100 people dined on pasta and focaccia catered by Tony and Alba’s. Tables were set facing a giant projector screen tuned to Fox News.

At a table near the back of the room, a group of Chinese Americans for Trump—the words were emblazoned on their T-shirts—traded anecdotes from the campaign trail.

Saratoga resident John Cagliostro sported a black number that read, “Deplorable Lives Matter,” which he said was his way of reclaiming a word Hillary Clinton used pejoratively about her rival’s supporters. 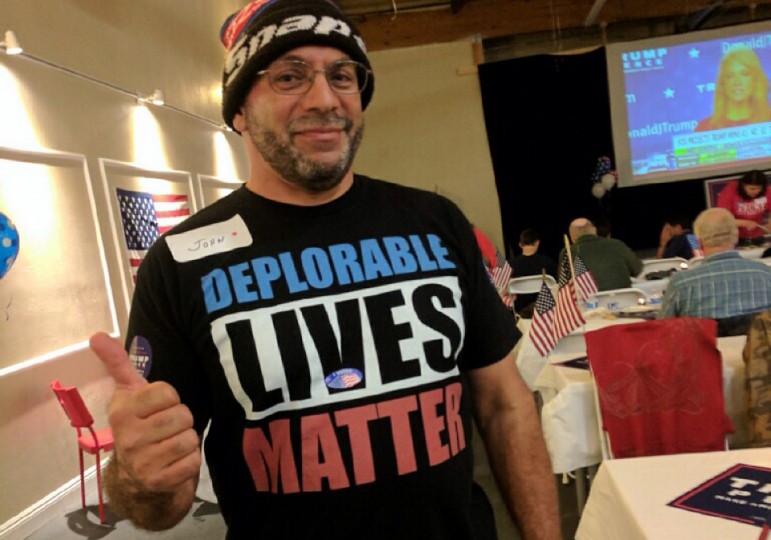 “Trump wasn’t my first choice,” Cagliostro said. “He wasn’t my second, third, fourth or fifth. Ben Carson was my first. But this isn’t about one person, or even about Trump. This is bigger than him. We need to restore this country.”

A man walking past took a dramatic spin on his heel and asked, “Did I hear someone say prison? You must be talking about Hillary. Put her in jail.”

Cagliostro gave him a knowing nod. “United we stand, Obama we fall,” he later quipped.

For San Jose resident Dilip Kumar, who owns a software company, his allegiance to Trump dates back to the first time he read The Art of the Deal in 2011.

“He’s a good businessman,” said Kumar, who wore a straw fedora, a campaign shirt and an “I voted” sticker. “Because of his policies, we can bring jobs back to the U.S.” A Clinton win, he said, would perpetuate a corrupt status quo.

In the Democratic Central Committee campaign hub at The Plant at Monterey and Curtner, the mood at the Dem HQ was considerably less buoyant, as the GOP nominee edged ahead in the “race for 270” electoral votes nearly an hour after the polls closed. About 200 people perched on folding chairs watched MSNBC coverage in horror.

Aimee Escobar, a county planning commissioner, said Trump’s bombardment into national politics marks the beginning of the end of civil discourse. “He made it OK to talk down to people,” she said. With results looking dismal for Clinton, the life-size cardboard cutout of her in a crisp pantsuit and winning smile began to feel cruelly out of place, someone remarked.

As did the two-and-a-half-foot sheet cake with “Congratulations Madam President” inscribed in red-white-and-blue frosting. 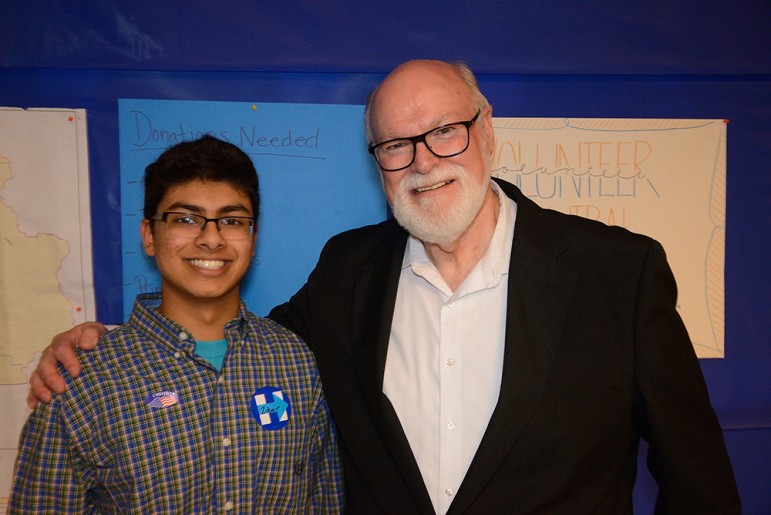 State Sen. Jim Beall, who held a strong lead over challenger Nora Campos by the time the second round of returns posted, walked in long after the mood had soured. A few folks congratulated him and posed for a picture, but most people’s eyes were glued to the TV screen.

“This just seems just and right for this to be [Clinton’s] time,” Lynn Rogers said. “So I’m loathe to accept this.” Moments before, she said, she’d been chanting with a Buddhist about Clinton “giving a voice to the voiceless ones.” At the back of the room, a Trump piñata hung on the wall with his paper mache arms outstretched and a sticker demanding to “stop bigotry” on the left side of his tissue blazer.

To round out the night, Fly made a brief stop by the South Bay Labor Council’s party to see what was cracking. Within two minutes a labor flak escorted a reporter and photographer out without any chance to negotiate. The banquet hall spread looked to be mostly finger foods, with a cheese and olive platter and salad bar, bottled IPA beers available—not for us, of course—and a lot of empty seats. It didn’t look like anyone had an interest in sticking around to see if Hillary would concede before the end of the night.