A year ago, on January 5, Rosemary Kamei told Fly she was running for San Jose City Council. And six months later, she stomped on two opponents, winning the city’s District 1 council seat outright in the primary, with nearly two-thirds of the vote.

Now, a year later, she’s positioned to be named the city’s vice mayor, an announcement we’re expecting any minute now.

Kamei represents District 1, which is where San Joseans like to shop since it encompasses Santana Row, Westgate and a chunk of Westfield Valley Fair. More than just a big shopping center with a council flag, however, the district has almost as many neighbors as Switzerland, sharing borders with Campbell, Cupertino, Santa Clara and Saratoga.

Why Kamei? Well, Mayor Matt Mahan doesn’t have many natural allies on the council—Bien Doan might be the closest to one. The rest endorsed his election opponent, and most of them are aligned with the South Bay Labor Council and its allies, who spent more than $5 million to try and keep Mahan in Almaden Valley. Then, after getting calls from labor leader Jean Cohen, the outgoing council voted last month to allow the majority to appoint two seats rather than allow district residents to choose a representative.

Kamei was SBLC-endorsed as well, but her margin of victory may give her the latitude to be a bit more independent. She got her feet wet with 17 years on the board of the Santa Clara Valley Water District and also served on the Santa Clara County Board of Education.

Having degrees in Political Science and Urban and Regional Planning (a master’s) can’t hurt either. Political skill and education in urban issues will come in handy, and being part of the city’s largest ethnic group, Asian Americans, stacks the deck further in her favor. 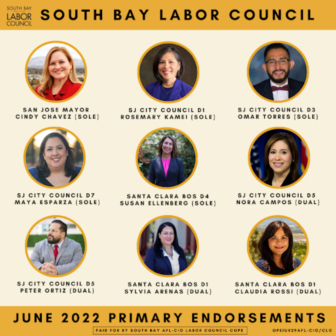 A card for South Bay Labor Council in the June election had Rosemary Kamei top and center.