But Wall Street Journal reporter Jamal Khashoggi’s apparent murder at the hands of Saudi Arabian agents on Oct. 2 has forced the tech industry to confront its budding romance with the oil-rich theocratic monarchy, which carried out 48 beheadings in the first four months of 2018. A host of top Silicon Valley executives have since pulled out of this month’s second annual Future Investment Initiative conference in Riyadh, known as “Davos in the Desert,” including Uber CEO Dara Khosrowshahi and Google Cloud chief exec Diane Greene. 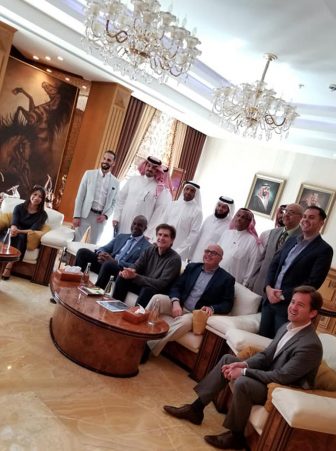 The San Jose-Silicon Valley delegation on the five-day trip back in May. (Photo via Facebook)

Now, San Jose Councilman Johnny Khamis has confirmed through a spokesman that he turned down an invitation for what would have been his second trip to the kingdom “out of concern for recent developments.”

For local activists who have tirelessly raised awareness about the U.S.-backed, Saudi-led atrocities in Yemen, it’s about damn time.

Members of the Yemeni Alliance Committee rebuked  Khamis back in May for joining Silicon Valley Leadership Group CEO Carl Guardino, Silicon Valley Organization’s second-in-command Madison Nguyen and Google Ventures’ Lo Toney on a five-day delegation to Riyadh despite human rights abuses within and beyond its borders.

“Why do you want to bring business to our lovely Bay Area with your war criminals?” Shukria Hakim asked Khamis at the May 15 council session. “Saudi Arabia has been bombing, killing Yemeni people for over three years. Thousands have died. … Why did you visit? Is money and profit more important than a Yemeni’s life? Do you wish to invest in bloodshed?”

“How can we allow our economy to profit or to contribute to atrocities?” he asked city leaders. “If anything, the respective City council should be drafting language to reject any further collaborations. We are supporting this war by entertaining these ventures and doing business with war criminals. I expect you all to agree that profit should not come before human life.”

While San Jose as a city plays a relatively minor role in geopolitical affairs, members of the Yemeni Alliance Committee said it should still take a stand as a destination for immigrants and refugees, as the so-called Capital of Silicon Valley and as part of a region that manufactures weapons and other military technologies.

“Having said all of that, it is hard to believe that the city of San Jose—leaders of technology and innovation—are not only willing to do business with Riyadh, but have also taken steps to intensify the partnership, which is apparent with Khamis’ visit to the Kingdom back in May,” said Jehan Hakim, who chairs the Yemeni Alliance Committee. “Even after Saudi was condemned by the United Nations for its involvement in Yemen, with the killing of hundreds of children. The Yemeni-American community holds our elected officials accountable for doing any business with war criminals. If we will not be people of conscience and speak against our government’s role in the war in Yemen, we should at least halt all business with the kingdom until they halt the airstrikes and violence that is killing the people of Yemen and perpetuating famine and disease.”

Mayor Sam Liccardo, who expressed support for the privately funded journey back last spring, has yet to respond to a request for comment.

At the same mid-May meeting where the activists criticized Khamis for the trip, it should be noted that he made a point of expressing empathy for the plight of the Yemenis.

“I don’t get to choose who the United States gets to make friends with,” he said in response to Taleb and Hakim. “I’m a Palestinian, and just yesterday, 50 Palestinians were killed by a U.S. ally while protesting. So I’m no stranger to the sensitivities that you have displayed. But I also know that not talking to people is not understanding one another.”

At the time, Khamis justified his trip by extolling the power of capital to change hearts and minds, adding that he hopes the kingdom’s ministry of trade sets up shop in San Jose as a result of the expedition.

“I think businesses have led the way in many ways to change even U.S. domestic policy on women’s movement, on gay rights,” he said. “So business is a great way to get your foot in the door and start making changes.” 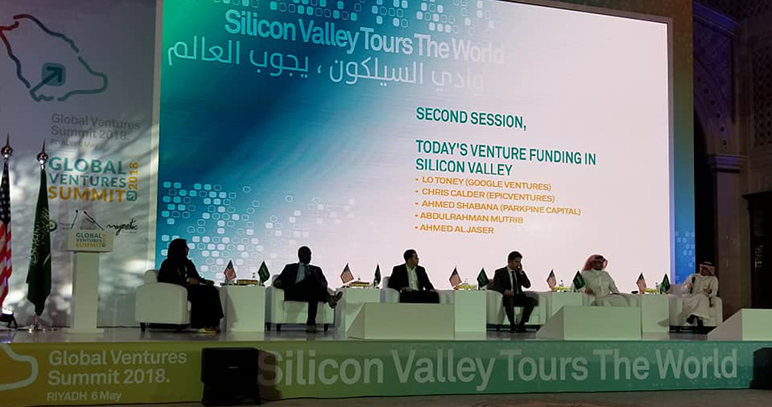 Google Venture's Lo Toney was one of the featured speakers at an event during the trip. (Photo via Facebook)