Acting on his own initiative, a federal judge in San Francisco has ordered three disabled plaintiffs and their lawyers to prove they are entitled to bring their lawsuits in federal court.

Because the plaintiffs brought their federal claims under the Americans with Disabilities Act, the plaintiffs must have legal "standing," which requires that they genuinely expect to return to the places they experienced discrimination. 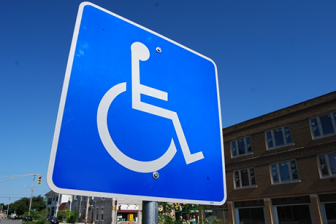 An attorney has slammed dozens of San Jose businesses with lawsuits alleging violations of the Americans with Disabilities Act. (Photo by Steve A. Johnson, via Flickr)

The unusual orders require the plaintiffs and their lawyers to submit declarations under the penalty of perjury that prove they genuinely intend to return to the places that were inaccessible when they first visited.

The orders, issued by U.S. District Court Judge Vince Chhabria, on April 18 and April 19, apply to at least nine different cases in which the plaintiffs are represented by the San Diego law firm Potter Handy LLP.

The orders follow an April 11 civil lawsuit in San Francisco Superior Court jointly initiated by the district attorneys of San Francisco and Los Angeles accusing Potter Handy of filing hundreds of fraudulent lawsuits under the ADA.

The district attorneys allege that Potter Handy was aware that their clients did not have legal standing to bring the cases in federal court, but the firm filed the cases anyway. The suit seeks an order that, among other things, would require the firm to repay the amounts that defendants have paid to settle the allegedly fraudulent suits over the last four years.

Two of the three disabled plaintiffs identified in the nine orders use wheelchairs for mobility. Both are frequent ADA litigators in the U.S. District Court for the Northern District of California.

The two litigants -- Brian Whitaker and Scott Johnson -- have been extremely active. A Bay City News analysis shows that in 2021, Whitaker filed 509 lawsuits in the district and Johnson, the plaintiff in six of the cases Judge Chhabria has called out, more than a thousand.

Johnson attracted media attention after he was indicted in May 2019 for failing to declare income from his ADA lawsuits on his federal tax return. Johnson denied that the income was taxable. His trial was postponed for over a year because of COVID-19 and is currently scheduled in January 2023.

Johnson holds the distinction of filing the most ADA cases in the district, having filed more than 2,500 cases since 2010. He is also statewide champion over that period with more than 4,000 filings. While that averages to roughly a case a day every single day for 11 consecutive years, in Johnson's filings say that he physically visited the location of almost every one of the defendants he has sued, and in each case where he did, he personally encountered barriers to accessibility. He also says that he intends to return to each of them when the barrier to accessibility is remediated.

Dennis Price, a partner at Potter Handy, defends Johnson. In an interview last month, Price said, "Johnson is somebody that the people like to kind of pick on in this area. But if you go to Sacramento, Sacramento is viewed widely as one of the most accessible places in America. And that is entirely because of him.... That's where he lives. And he aggressively pursued compliance in that area and frankly, other people with disabilities are the beneficiaries of that."

Each of the judge's orders notes the district attorneys' lawsuit against Potter Handy, and each directs the plaintiff to substantiate the allegation about an intent to return to the defendant's establishment.

Potter Handy must file its own declaration that describes in detail "the investigation counsel conducted to ensure that their client visited the establishment and intends to return there."

The intention of returning has become a flashpoint in the standing discussion.

Standing is the legal term used to describe what a plaintiff must prove to show that he is entitled to litigate a claim in federal court. Without legal standing, a judge has no jurisdiction and must dismiss the case.

In order for an ADA plaintiff to have standing to seek an injunction, he or she must not only demonstrate that he or she has been injured by actions of the defendant but also that there is a real and immediate risk that he or she will suffer harm in the future if the injunction is not issued.

As a 2011 decision of the U.S. Court of Appeals for the 9th Circuit put it, a plaintiff "lacks standing if he is indifferent to returning to the store or if his alleged intent to return is not genuine."

The district attorneys' lawsuit said that in "vast numbers" of Potter Handy lawsuits, the firm "falsely alleges that ... the Serial Filer genuinely intends to return to the sued business."

The suit -- a 58 page document with almost 300 pages of exhibits -- alleges that Potter Handy's clients "almost never return to the businesses they sue after a settlement is reached" and the firm uses "false standing allegations to maintain their scheme of deceiving the courts and businesses they sue into believing they have federal standing."

Chhabria's orders all say that after the declarations are submitted, he will likely schedule an in-person evidentiary hearing "to test the veracity" of the declarations.

Attorney Philip Stillman is one of the most active litigators defending ADA lawsuits in California and is familiar with many of the ADA plaintiffs that Potter Hardy represents. Stillman represents the defendant in one of the nine cases where Chhabria has issued orders to show cause.

Stillman thinks that Chhabria's orders are both important and unusual. He attributes them in part to the fact that independent district attorneys are making allegations against the law firm, not just the defendants in the litigation.

Chhabria gave the plaintiffs and their counsel 21 days to respond to the court's directives.