This is the first in a series of stories about the May 26 victims of the mass shooting in San Jose, VTA, In Memoriam.

Adrian Balleza was known for lighting up any room with a big smile and sharing his signature goofy jokes.

He was a family man first and foremost, and his proudest moment was becoming a father, his wife Heather said.

Balleza, a Gilroy resident, was one of nine people shot and killed by a gunman May 26 at the Santa Clara Valley Transportation Authority’s light rail facility in San Jose, where he was employed as a maintenance worker and operator.

The 29-year-old leaves behind many family and friends, including his 2-year-old son Joseph. 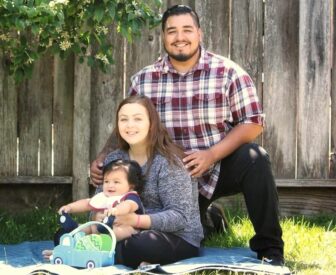 IN MEMORIAM:  Adrian Balleza of Gilroy is shown with his wife, Heather, and son, Joseph. (Photo Courtesy of the Balleza family)

“Joseph was his world,” Heather Balleza said in a statement. “It breaks my heart that he won’t be able to watch him grow up, take him fishing or to his first football game. He had so much life left and things he wanted to do. He was loved by so many people.”

Balleza started with the VTA as a bus operator trainee in 2014, according to VTA Board Chair Glenn Hendricks.

“What can I say about that gentleman?” Singh said. “He was very kind-hearted.”

“Adrian was always so welcoming to all that passed through his life,” she said. “He had his big bear arms open to anyone. He was a true family man and loved his family more than anything.”

Heather Balleza said the family moved to Gilroy three years ago, a place where Adrian “loved to be.”

His compassion for others was on full display on May 26, when he, Paul Delacruz Megia and Taptejdeep Singh were in an upstairs break room when the shooting began.

“All three of them, brave enough, ran out of the room to warn others and gave their lives in the end,” Heather said.

Heather said she wanted to reach out to the other victims’ families to let them know “we are grieving with you.”

“My heart was breaking with you all at the Red Cross facility,” she said. “Our family thanks you all for your kind words, thoughts and prayers. Our hearts are breaking over and over.”

A GoFundMe fundraiser in support of the Balleza family more than doubled its $15,000 goal less than a day after it went live. To donate, visit bit.ly/2SAytKv.

More fundraisers are ongoing for all the victims. Working Partnership USA is currently accepting donations for its victims’ fund at act.wpusa.org/vta_victims_support_fund.