Councilman Tam Nguyen spent a night at Portland's city-sanctioned homeless camp to test the feasibility of building a similar shelter here in San Jose. At 3am Saturday, San Jose Inside received a series of text messages from the councilman, who had trouble sleeping through the night. Below is a transcription of those texts.—Editor

Finally, I made it to the Right 2 Dream Too legal homeless encampment in downtown Portland at the gate of Chinatown.

The city is romantic and charming with breathtaking views of the Willamette River cutting through it. But the streets are full of so many homeless people. The number is 3,000, I was told.

What strikes me is that a great majority of them are very young—many of them young men with children. Their faces show signs of drug and alcohol abuse. But those who line up for a sleeping spot at the camp appear to be more sober, or at least know how to put on a good face for admission.

The physical appearance of the camp is more dilapidated than I wanted, and it obviously needs more improvement—especially in the cold, rainy season. But to my delight, there is electricity and a computer center with WiFi!

There are three port-a-potties, but no shower or laundry. There’s a microwave and toaster, but no kitchen or refrigerator. In the afternoon, many local charities drop off bags of good food.

The founder, Ibrahim Mubarak, told me that there are about 25 members who live here and help operate the center, which can provide up to 120 sleeping spots.

By 6pm, people start the line to sign up so staff can prepare the necessary arrangements, including making sure there are enough sleeping bags. Later, by 8-9pm, the campers have to come back to turn in for the night. 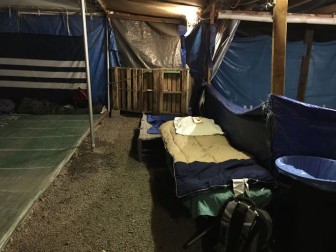 The councilman's cot for the night.

Tonight, I count about 50 men, 20 women and some couples. No children. The men and women sleep in separate quarters, but the couples are allowed to stay together in a special tent for couples. All tenants must abide by strict rules: No drink, food or smoking.

By 10pm, it seems that everyone is sound asleep, many of them loudly snoring after a long, hard day. Outside, I hear the sounds of city life. Loud talking, singing and yelling of young revelers down the streets drown out the traffic noise and intermittent police or ambulance sirens.

Tomorrow, by 7am each day, there’s a wake-up call—just like every day for the past five years. I ask Ibrahim how much it costs to run this program. He says $1,500 a month. That’s about $50 a day, or 50 cents (yes, that’s two quarters) per person per night. That’s it.

I asked myself, “What do I do with two quarters?”

I, for one, can’t think of anything that I can do with that little pocket change nowadays. A few years back, before the price increase, I could park my car in downtown San Jose for 30 minutes with two quarters. Now, every time I park downtown for lunch, the new credit card-fed meters charge me $2 for an hour. That’s eight quarters.

With eight quarters, the Right 2 Dream Too camp can provide sleeping spots for a family of four. So the entire yearly operating budget is less than $20,000. Some winter months, Ibrahim explains, it gets cold, which drives up electricity bills.

The camp lies on less than an acre near Portland’s Chinatown. The owner sold the lot to the city, which plans to develop it eventually. Meanwhile, the organization that runs the camp has bought a new location across the river a few miles away. The new site will be better equipped, with full utilities, toilets, showers, laundry and even a kitchen.

One burning question on my mind related to safety. I was told that for the past five years, there has been no reported crime at this camp. Details remain vague, but I think the speaker may have meant no violent crime.

Tonight, laying in a cot among the homeless at this strange place, while everyone else around me is sound asleep amid noisy street life, it’s just me who is wide awake.

I keep trying, but sleep escapes me tonight. The only other people awake in the vicinity are a few assigned staffers who rotate security shifts to keep watch over the camp.

Now, just after 1am, the town is starting to quiet down outside. I keep telling myself that I should have come here sooner, much sooner—maybe four or five years sooner.