When the Anderson Dam overflows, the middle of Coyote Creek floods. Every single time, ever since the dam was built in 1950.

It’s happened three times in the past two decades alone. In 1997 and 1998, the water inundated homes and businesses south from Tully Road up to Montague Expressway. It also happened earlier this year, when the 67-year-old dam filled to the brink and unleashed a torrent of water that forced thousands of people to evacuate from those same places, including the largely low-income Rock Springs neighborhood.

In the wake of the most recent disaster, the Santa Clara Valley Water District vowed to build levees around Rock Springs and other flood-prone areas. But permanent infrastructure—flood walls, retaining ponds, creek widening—would cost about a billion dollars and take up to a decade to build.

A short-term, low-tech solution has been identified: floating pumps that could help keep the Anderson Reservoir levels below the brim for give-or-take $3 million.

However, the water district—Silicon Valley’s lead flood protection agency—has no official plans to install them, even though they might have protected Rock Springs from the most recent flood that left hundreds homeless and caused $100 million in damage.

“The water district continues to ignore proven scientific hydrologic solutions to the problem until they can get the dam rebuilt,” said Jeffrey Hare, an attorney who lives in the Naglee Park neighborhood, which flooded a day after Rock Springs. “That’s going to take at least seven more years—if they can get the money.”

Records obtained from the state Department of Water Resources (DWR)—available online here—show that the water district submitted a proposal in mid-February to install floating water pumps for that very purpose. It went so far as to include an estimate from a vendor, HercRentals, which spelled out the cost and schematics.

“We are not planning to install the pump-over just yet, but we are preparing for that potential possibility by obtaining approvals from the regulators beforehand,” Steven Wu, a senior engineer at the water district, wrote to the DWR. “We would like your agency’s review and approval of the proposed work. The district will begin obtaining permits from the various environmental agencies.”

The correspondence was sent Feb. 13, and installation of such pumps would take as little as a few days to a week. The flood occurred Feb. 21.

Also on Feb. 13, another water district employee emailed the city of San Jose to “lean forward” with emergency preparations because of the flooding forecast for President’s Day weekend. But Wu conveyed none of that urgency to the state. He made no mention of the rains that were filling the reservoir faster than the district could empty it. The DWR, which knew about the rising water regardless, never brought it up either.

State officials raised some concerns about Wu’s proposal, but invited him to submit a formal plan with more details. The district never followed through.

When San Jose Inside reached water district spokesman Marty Grimes for comment, he responded with a written explanation from the agency’s interim CEO, Norma Camacho.

The district hasn’t pursued the pumping option, she wrote, because the system wouldn’t be able to eject water fast enough during heavy rainfall to keep the reservoir below its restricted level: 67 percent full, a limit imposed by the state because the dam lies on the San Andreas Fault.

Hare balked at that explanation.

“That’s not the point,” he said. “They’re missing the boat entirely.”

Hare believes the pumps offer a short-term fix until the long-term plan materializes. Seismic retrofitting will take four years to complete, although construction isn’t planned until 2020 and funding remains uncertain.

During heavy storms and rainfall, Anderson Reservoir fills far beyond its restricted capacity. Sometimes it overflows. And each time it does, the same areas along mid-Coyote Creek get flooded.

Since the dam’s construction, the district has filed 13 flood reports—state-mandated documents that detail weather events, affected areas, damage estimates, injuries and deaths. The records show that in eight of those cases, when the dam didn’t fill and spill, the flooding impacted the west side of Santa Clara Valley and Alviso. In the rest of those instances, however, Anderson Reservoir swelled to the brink with rainfall and flooded the central stretch of Coyote Creek, from Tully to Montague.

If the district could keep Anderson at or below 99 percent capacity, it then follows, there would be no overspill and no flooding in the middle portion of Coyote Creek.

“At least, that is what the hydrological studies show,” Hare said. “The way to keep this 99 percent level, here and in reservoirs all over the world, is to use ‘pump-over’ systems, either with powered pumps or siphon pipes.”

Pat Ferraro, who served for 23 years on the water district’s Board of Directors, not only agreed with Hare’s assessment—he also said there’s a local precedent. 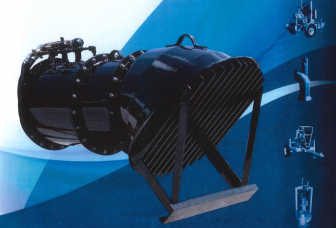 A rendering of the pump the Santa Clara Valley Water District considered using in Anderson Reservoir. (Image via HercRentals)

“Since the siphon method was actually deployed successfully at Calero Dam in the late 1980s, it can certainly be deployed at Anderson Dam,” said Ferraro, who teaches water policy at Santa Clara University. “It’s pretty low impact, very efficient in terms of moving the water over the dam.”

If the district used the pumps as a stopgap until it completes the years-long Anderson Dam upgrade, Ferraro added, it would almost certainly prevent the kind of flood that tore through the heart of San Jose four months ago and has left hundreds of people homeless.

Ferraro compared the district’s dismissal of the pump option to the DWR disregarding pleas to pave the Oroville Dam spillway. In 2005, environmental groups filed a complaint with the Federal Energy Regulatory Commission, calling the Oroville spillway unsafe. The government dismissed the request after running it by California water regulators, who said everything was fine. It took a catastrophe 12 years later to prove them wrong.

When heavy rains pummeled the Sacramento Valley dam’s aging infrastructure in February, the valley below flooded, forcing the evacuation of 200,000 people.

“With Oroville, there weren’t a lot of municipal areas in the path of the flood,” Hare said. “It’s mostly farmland. With Anderson Dam, look at the inundation maps.”

The maps show that the largest reservoir in the region—a deep gorge full of 30 billion gallons of water—overlooks a valley that’s home to 1.8 million people.

“There is so much more at risk here than in Oroville,” Hare said. “We’re a densely populated region and an economic engine for the whole state.”

Last week, the water district voted to expand flood protections another few miles up Coyote Creek to Rock Springs—the neighborhood that bore the brunt of the deluge when Anderson Dam overflowed in February. The district agreed to extend levees through Tully Road to defend the working-class community against the kind of flood that strikes about every 25 years, such as this past President’s Day weekend.

But the district’s June 13 vote doesn’t amount to much.

The board allocated no money for the plan and proposed no short-term protections for San Jose’s most flood-prone areas. The only related action at last week’s meeting involved forming a task force to study the issue, although no clear goals have been determined. It’s possible that the yet-to-be-formed task force will study the over-pump option, but there’s no guarantee.

“The mission isn’t really specified yet,” Grimes acknowledged. “What I gather is that staff was directed to come back to the board with more details.”

Barbara Keegan, who serves on the board of directors, says she wants to revisit the the pump option. Later this week, she plans to meet with Hare and other community members to discuss the proposal that got tabled earlier this year.

The real problem, in Ferraro’s view, is that the water district has an identity crisis. It compartmentalizes its functions—to supply the region with water and protect it from floods—instead of integrating them. Despite spending a great amount of time and resources coming up with a plan called “One Water,” he said, the district continues to classify the reservoir solely for water supply.

“The dam could and should be re-designated as a multipurpose reservoir, and redesigned to rapidly draw down the reservoir during winter months and reserve capacity to capture future storms,” Ferraro said.