Unit 9 felt like an oven. The heat would rise through the second-story 500-square-foot flat, as if standing over a lake of fire, Robert and his wife Kathleen Radivojec would bitterly quip.

“That was the least of our problems,” Kathleen reminds her husband, a burly, Balkans-born U.S. Army veteran. “The heat was awful, but the whole place was a death trap.”

“True,” Robert replies in a thick Croatian accent. “If we stayed there longer, it could have killed us. Now look, we’re alive but homeless.”

On July 6, a San Jose Code Enforcement officer condemned the dilapidated apartment unit, forcing the couple into a local shelter. The Radivojecs gathered their photos and other belongings of sentimental value but had to leave the furniture—including an antique cabinet, dresser and sewing machine—because they were too heavy to carry across a rot-weakened floor.

“Nobody would listen to us,” she says during an iced-coffee break from apartment hunting on a particularly hot afternoon last week. “That place should never have passed inspections in the first place. This is how people become homeless.”

The couple has joined a few of their former neighbors in a public interest lawsuit against their old landlord. Filed last month by the Law Foundation of Silicon Valley, the case accuses property owner Michael Lucich of violating federal federal housing law and letting the apartment lapse into dangerous slum-like disrepair.

While the Law Foundation calls this an especially egregious example of weak government oversight, its lawyers say it also reflects a growing power imbalance between landlords and renters. In a competitive housing market that gives property owners the upper hand, tenants are often too afraid to speak up about substandard living conditions.

Meanwhile, with no local policy to prevent landlords from discriminating based on income source, renters with subsidized housing vouchers increasingly end up in the worst living conditions in the most impoverished areas.

“It wasn’t supposed to be that way,” says Kara Brodfuehrer, a senior attorney for the Law Foundation. “Section 8 was supposed to lift people out of poverty, but what happens is they get isolated in lower-income neighborhoods. It’s segregating people even further.”

Robert and Kathleen, both on disability and a year shy of 50, moved into the cramped, crumbling apartment on Rexford Way near San Jose City College in spring 2014. With a Section 8 voucher about to expire, even after an extension, and no luck finding a landlord willing to rent to a pair on public assistance, they settled for Unit 9.

“It was because of me,” Robert says. “She didn’t want to move in there, but we ran out of time. We already asked for an extension on the voucher. This was the only place that accepted us.”

Immediately, they noticed the vermin. Skittering in and out of the fridge, over their food and toes and through the wind-whistling gaps in the chipped green door. The cockroaches seemed impervious to bug bombs. The brown tile floor began to sag, having been patched over waterlogged beams. One day, Kathleen’s foot sunk right through. Even more frightening: the balcony walkway right outside the unit caved entirely, leaving a hole clear through the rot-soft wood. 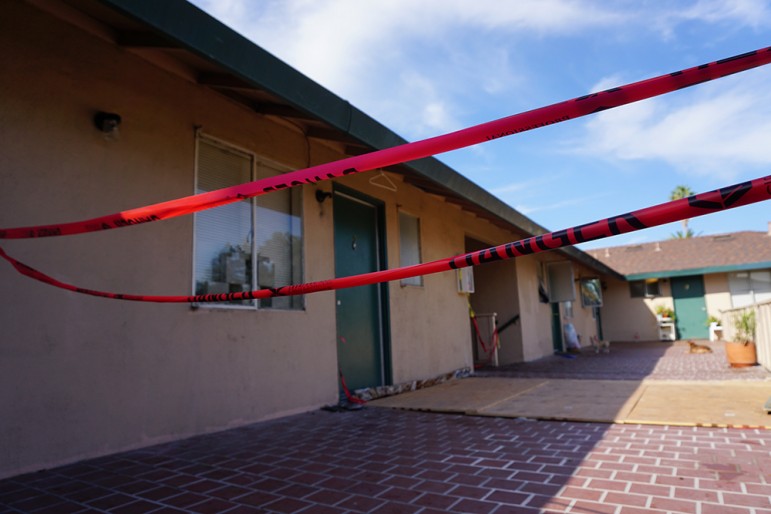 A caved-in balcony right outside the Radivojecs' old unit has been haphazardly patched up and taped off. (Photo by Jennifer Wadsworth)

When Lucich, a septuagenarian Bosnian emigre, collected rent each month, the Radivojecs would tell him about the problems. But, as evidenced by city records, he never fixed them, flouting his end of the Section 8 agreement to keep the place legally habitable.

Robert alerted the Housing Authority of the County of Santa Clara about the dangerous conditions in April 2014, shortly after moving into the place. But the agency waited a full year to inspect the site.

“That was one of the biggest issues in all this,” Robert says, “that the county let this go on for so long. Lucich is a problem, but nobody made him stop.”

After repeatedly warning Lucich to repair the place, the housing authority stopped paying rent. Lucich tried to evict the Radivojecs—even though federal law prohibits landlords from kicking out a tenant for a housing agency’s failure to pay.

A few weeks later, this past July, the city locked up Unit 9 and taped up a notice on the door designating the flat legally uninhabitable, structurally unsound. Local housing law requires Lucich to foot the bill for his displaced tenants’ relocation, but he has yet to pay.

Lucich—who lives in a five-bedroom home with his wife, Sladana, in a gated community in Los Gatos—did not respond to calls, texts and emails for comment by press time.

Records show that he and his wife own several properties and businesses in the Bay Area, many of which have racked up code enforcement violations. In 2007, the Equal Employment Opportunity Commission sued him for allegedly firing several people at an auto body shop for complaining about sexual harassment.

A few years ago, a tenant won a $15,000 judgment against him for failing to keep up a property at Shortridge Avenue, another derelict apartment in San Jose. Beverly Taylor, also a Section 8 renter, has permanent scars from a bed bug infestation that Lucich failed to eradicate and forced her out of her home. “I was homeless for a year,” Taylor says. “He was supposed to pay my relocation fees and all of that and he did nothing.” Thousands of dollars worth of furniture had to be discarded, Taylor says, but she received just a few hundred dollars of that judgment, despite repeated attempts to collect.

“In person he’s unassuming,” Brodfuehrer says of Lucich. “He seems like this meek old man, but he’s not. He just talks himself out of things, apparently thinking he could keep getting away with it.” 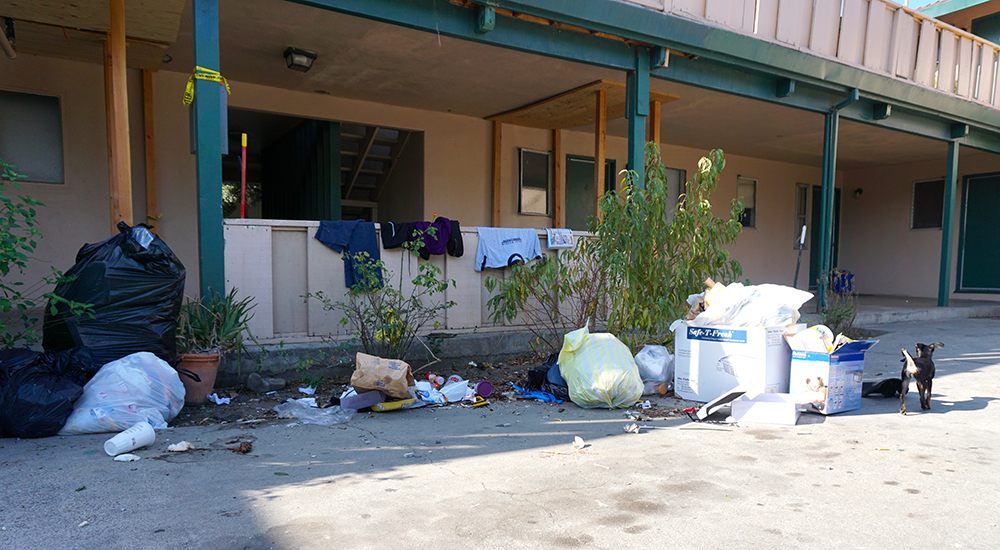 A few doors down from the Radivojecs’ shuttered and red-taped Rexford Way unit, another family continues to live in similar squalor. Benjamin Garfias, his wife Alejandra Hernandez, both 44 years old, and their disabled 14-year-old son signed on to the same lawsuit that paints Lucich as an unrepentant slumlord.

“When we moved in, [Lucich] said he would fix everything—the shower, the hole in the floor, cucarachas,” says Garfias, whose family primarily speaks Spanish. “We said, ‘OK, we need our own place,’ so we moved in.”

Since moving into Unit 8 in January, Garfias says Lucich raised his rent in the middle of a yearlong lease, from $1,500 to $1,600 months later. Still, the shower pipes shake, the cockroaches scurry all over their food and floors and no matter how much Hernandez scrubs and scours, she can’t make her home feel clean.

The oven kept turning on and off, heating the entire unit in the thick of a summer swelter. A PG&E inspector told her she was lucky to have kept the windows open or the fumes would have been fatal.

When Hernandez brought the issues to Lucich, she says, he would tell her to fix them herself or “go back to Mexico.” He tried to evict her, but a judge dismissed the case.

In nearby Unit 6, Benjamin Rapier, another plaintiff and Section 8 tenant, spent seven years battling Lucich over simple repairs. One summer a few years ago, his bathroom ceiling collapsed. Lucich fixed it a year later, but only after the city code enforcement ordered him to do so. Rapier has come up dry in his search for a new place because few landlords are willing to rent to someone on public assistance.

Brodfuehrer says she hopes the tenants’ case can inform policymakers as they consider enacting stronger rental protections. San Jose’s City Council plans to lower the allowable annual rent increase by next year and outlaw “no cause” evictions. But city leaders tabled a discussion about income discrimination pending a lawsuit filed against the city of Santa Monica over a similar ordinance.

One policy change enacted earlier this year, however, could prevent landlords like Lucich from getting away with so many violations for so many years. Prompted by a 2013 audit, code enforcement launched a three-tier proactive inspection model in January as part of its existing Multiple Housing Program. Instead of just waiting for the public to file complaints, the city created a three-tier system where top tier properties would be inspected on a six-year cycle and poorly maintained third-tier properties would undergo more frequent inspections at a higher cost to landlords.

To increase oversight of San Jose's 7,000 apartment buildings and 90,000 units, the city upped the number of inspectors from a dozen to 16 this year.

“The city should have been more aggressive before, then we wouldn’t have gotten where we are with this case,” Brodfuehrer says. “If you go back, it was pretty obvious that [tenants] would file a complaint, then all of a sudden drop it because they were scared of retaliation.”

Now, the onus lies with the city to follow up, says Mollie McLeod, a Planning, Building and Code Enforcement division manager who oversees the new apartment inspection program. Notably, the number of service requests—many of them complaints about substandard housing—has declined as the market has heated up. McLeod says she fielded 390 service requests in 2014-15, down from 547 in 2013-14 and about a hundred more the year prior.

Tenant advocates say the drop in complaints could be cases where renters feel intimidated by their landlord. With no “just cause” protections, a property owner can file a no-cause eviction and find another tenant who won’t complain.

“I watched people get evicted who would complain,” Robert Radivojec says. “I even had tenants turn on me because I complained. They don’t want to rock the boat because look at what happens: I’m homeless, my wife is homeless.”

Now, marked as a tenant who raises hell when he’s burned, he expects that finding a willing landlord will be that much harder.

A map showing how Section 8 renters tend to end up in the lowest income, lowest opportunity neighborhoods. (Source: Law Foundation of Silicon Valley)