Hai Tran fled Vietnam by sea, going from fishing boat to merchant ship to a refugee outpost in Hong Kong before a sibling sponsored his immigration to the U.S. in 1980. His wife, Kim Ho, joined him in California after her own treacherous journey, giving birth to their first American-born child, Huy Tran, two years after their arrival.

Over the ensuing decades, the family earned a keep through landscaping, mending clothes and, eventually, its own nail salon. The war-scarred refugees laid the foundation for the younger Tran to attend San Jose State and Santa Clara University’s School of Law to pursue a career as an employment rights attorney in Silicon Valley.

Huy Tran said the U.S. welcomed his family and helped them thrive. They initially relied on public assistance to get a leg up, becoming one of a myriad immigrant successes woven into the tapestry of Bay Area life. But President Donald Trump’s push to deport potentially thousands of Vietnamese nationals rattled his faith in American institutions.

“It’s terrible,” he said. And, for many people, terrifying.

The fear is widespread in San Jose—home to Little Saigon and the largest Vietnamese population of any American city—and throughout the greater South Bay, which boasts one of the highest concentrations of foreign-born residents in the U.S. The White House unilaterally decided to reverse a decade-old pact that bars deportation of Vietnamese refugees who arrived stateside before 1995.

“We have 7,000 convicted criminal aliens from Vietnam with final orders of removal—these are non-citizens who during previous administrations were arrested, convicted and ultimately ordered removed by a federal immigration judge,” U.S. Department of Homeland Security spokeswoman Katie Waldman said in a statement. “It’s a priority of this administration to remove criminal aliens to their home country.”

Problem is: many of the targeted refugees sided with the U.S. in the Vietnam War, which makes them vulnerable to persecution by Hanoi authorities if forced to return. The reported targeting of Vietnamese refugees is part of a larger pattern by the Trump administration to go after immigrants with deep roots in the U.S. without regard for the circumstances that brought them here in the first place.

This time around, Trump’s crackdown affects one of the few minority groups that tend to favor Republican candidates. Thousands of Vietnamese war refugees who dropped anchor in the South Bay flocked to the GOP out of aversion for the authoritarian communism that overthrew their home country. Though subsequent generations lean more to the left of their forebears, the demographic remains largely conservative in the South Bay and other Vietnamese enclaves such as Orange County.

California Democrats, for their part, fiercely condemned the White House for trying to reinterpret the 2008 repatriation agreement to expand the roster of deportable immigrants. A dozen House members signed a letter saying the Vietnamese people vulnerable to removal “are Americans who are not familiar with the country they fled from.” Sending them back, they said, would devastate families and entire communities.

Officials in Santa Clara County, which prides itself on being a so-called sanctuary jurisdiction, issued similar denunciations.

In a statement emailed to reporters Monday, the county’s Office of Immigrant Relations vowed to “closely monitor” the situation. It also released a list of funded relief resources for Vietnamese, Hmong, Laotian, Cambodian and other members of the local Southeast Asian community worried worried about detention or deportation.

Though he’s heard from plenty of fellow Vietnamese-Americans who agree with the Trump administration’s rationale for stepping up deportations, Tran said such policies needlessly and recklessly perpetuate generational trauma. It’s true that the people eligible for removal have broken laws, he said. But he believes it’s inhumane to return them to a place that’s foreign to them, not to mention potentially dangerous. 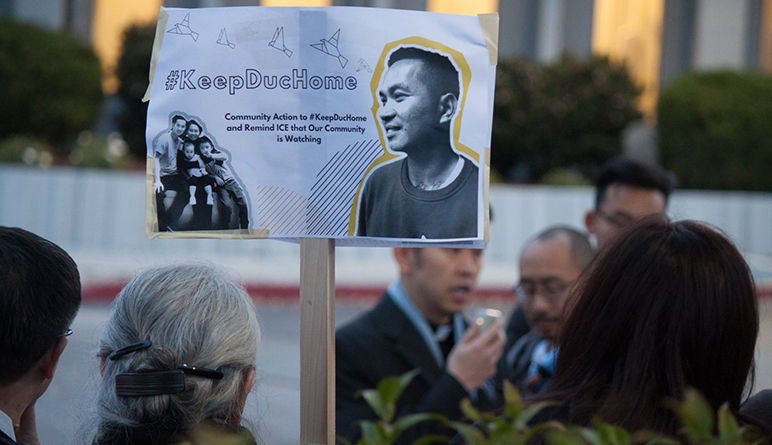 If the White House gets its way, more people like Duc Nguyen would be at risk for deportation. (Photo: VietUnity South Bay)

Activists raised similar concerns about Duc Nguyen, a 35-year-old San Jose father of two who feared deportation earlier this month when the U.S. Immigration and Customs Enforcement (ICE) called him in for additional questioning. Though Nguyen arrived in the U.S. after 1995, his case is instructive because it reflects the plight of so many other people who preceded him in the time period covered by the repatriation agreement.

Nguyen came to California through a humanitarian resettlement program at age 12, according to a community advocacy group called VietUnity South Bay, which shared his story online. Like many youth in communities of new immigrants, he was exposed to gangs and, with no legal help at the time, got caught up in the juvenile justice system.

Over the ensuing decades, however, Nguyen led a productive life. The near-lifelong East Side resident regularly attends Saint Maria Goretti Parish and Chua Duc Vien Buddhist Community Pagoda. He has a 2-year daughter and supports a medically fragile 6-year-old stepson and his aging mother, who requires round-the-clock care.

Thankfully for Nguyen, the #KeepDucHome social media campaign, sidewalk demonstrations, help from the Asian Law Alliance and other forms of public support for his continued residency paid off. Despite the scare from ICE, the U.S. Citizen and Immigration Services approved his petition to remain stateside.

Immigrant advocates caution that if the White House gets its way with the 2008 repatriation agreement, more people with stories like Nguyen will be in the crosshairs.

“Regardless of pre-95 or post-95 ...  many in our coalition are committed to continue fighting to keep families together,” VietUnity organizer Dieu Bruce Huynh said. “Americans believe in no double jeopardy, not being punished twice for one crime.”

The goal of VietUnity, he added, is to protect immigrants and refugees from getting sucked into the school to prison to deportation pipeline. Tran agreed.

“Imagine someone makes a stupid decision, maybe as a teenager, and tries to move on,” he said, “but instead of being able to do that, somebody’s grabbing them by the collar to a country across the ocean that they don’t know anymore. Maybe it’s a country they never knew. You’re punishing them a second time for crimes they already paid for. And the same families that got torn apart from the war are doomed to repeat the same cycle.”