Playful shrieks of children filled the gym at St. Paul’s United Methodist Church, where parents and older siblings helped the little ones decorate “ugly Christmas sweater” cookies. To one side of the room, kids lined up to get their photos taken with Santa Claus.

At a glance, the seasonal festivities belied the tragedies that brought everyone together for the weekend gathering. The Dec. 15 “Special Christmas From Heaven” aimed to put a smile on the faces of kids who lost loved ones to police use of force.

“These kids are always the kids that are forgotten in our community,” said Laurie Valdez, who spearheaded the event. “The children that are left fatherless because of police violence, nobody wants to acknowledge these children.”

Valdez knows about that particular kind of bereavement all too well. Her longtime partner, Antonio Guzman Lopez, was fatally shot by San Jose State police two blocks from St. Paul’s on Feb. 21, 2014. He was 38 years old. His son, Josiah, was 4 at the time. 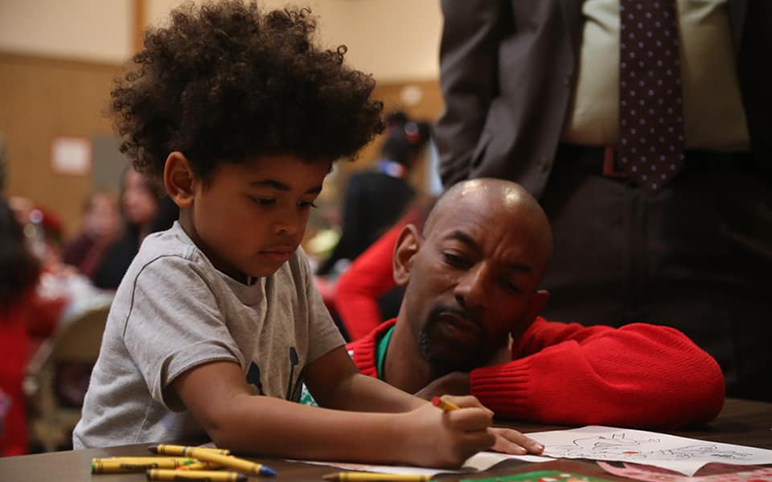 Kids busied themselves with arts, crafts and cookie-decorating at the second-annual holiday bash.

To cope with her own grief and to make sense of the tragedy for her young children, Valdez set out to comfort similarly afflicted families. Through “Justice for Josiah,” her son’s namesake, the mother of two and member of civil rights group Silicon Valley De-Bug rallies activists to protest police brutality. She also advocates for expanding civilian oversight of law enforcement—both here in San Jose and throughout the state.

Many of the events hosted by “Justice for Josiah” are neither political nor public, but private affairs for grieving families. Many of them are like the one held over the weekend at San Jose’s St. Paul’s church on 10th Street, where families had a chance to draw strength from each other. Only this one comes during one of the most difficult times to grieve: the holidays, when the pain of loss becomes particularly acute.

The inaugural “Special Christmas From Heaven” was sponsored by Silicon Valley De-Bug, which garnered additional support this season from Mothers Quest and Respect Organ. A service group called Operation Christmas donated bicycles while 100 Black Men of America donated other gifts for each of the half-orphaned kids who participated in the event. Together We Stand, another nonprofit advocacy group, also chipped in to the toy drive, which grew from 32 recipients in 2017 to 72 this year.

The children represented at the holiday event have family members that have been killed by local police since 2014—and at least one since 2009. Valdez lamented the lack of institutional support—from public agencies and non-governmental community organizations—for families fractured by police killings.

“They should start investing in community healing in our schools to get grief counseling,” Valdez said. “These kids are traumatized, and as they get older, trauma does’t go away.”

According to an analysis by the Washington Post, police throughout the U.S. fatally kill something on the order of 1,000 people each year. In all of California, the same newspaper reported that 109 people were killed by police to date by Oct. 1, 2018. That’s 16 more compared to the same time last year.

Nannies Muñoz lost her brother, Jacob Dominguez, on Sept. 15, 2017, when San Jose police shot the 33-year-old to death after a drawn-out cat-and-mouse vehicle pursuit. Officials say he was suspected of criminal activity, including armed robbery and drive-by shootings. According to Muñoz, Dominguez was unarmed and shot in the back with his arms up in surrender. 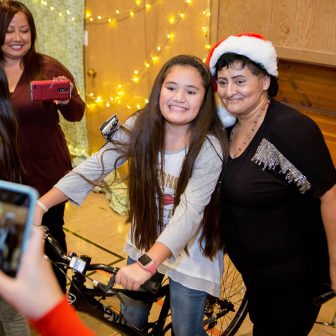 Laurie Valdez (right) poses for a snapshot with one of the 72 kids who attended the holiday party.

His surviving young children, two sons and daughter, still don’t quite fathom what took their dad from them, Muñoz said. Cindy Chavez, their grandmother, said they explain away his sudden departure by saying that God needed him in heaven. The family of Dominguez said they were happy to find a community that connects them with people who’ve endured similar trauma.

Pastor Jennifer Goto, who welcomed “Justice for Josiah” into her church for the event, offered a prayer for the children and their families. She also exhorted the men and women in law enforcement to commit to a “higher calling” of bringing “peace and not heartache” to the communities they serve.

Against a backdrop of youthful exuberance—presents being unwrapped, pizza being scarfed down by giddy youngsters and photos being posted for to memorialize the happy occasion—Valdez took pause to reflect on memories of her late partner. Guzman was a quiet person with a low-key demeanor who volunteered at the Antioch Baptist Church, a historically black congregation in the heart of San Jose.

“He was the most generous, helpful and giving person,” she said.

Valdez said she hopes that by sharing her grief, she can also share her hope.

“What my son suffers, I know all these kids suffer,” Valdez said.

And what gives him comfort, she added, is to find a place among other kids who understand him. That’s the goal of “Special Christmas From Heaven.”

“It’s to bring unity,” Valdez explained, “and to let the kids all meet each other and know that they are not the only kids without a parent.” 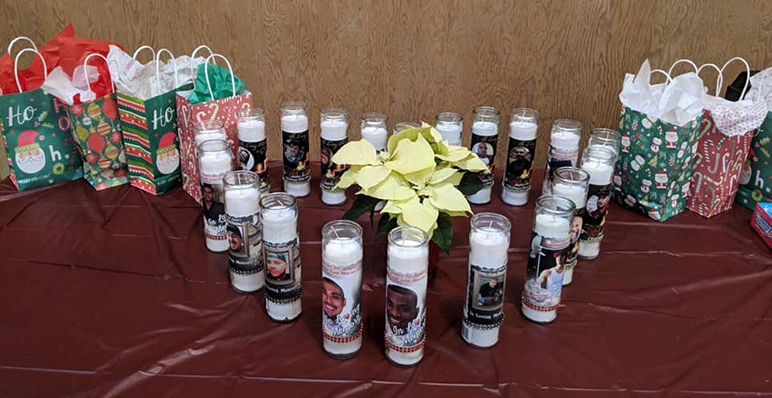 Some families brought candles emblazoned with the faces of the loved ones they lost to police use of force.