San Jose Inside kicked off its election series last week with an overview of San Jose’s District 2 race—one of five seats up for grabs on the City Council in the March 3 primary. This installment looks at District 4, where Councilman Lan Diep is fending off three challengers: David Cohen, Huy Tran and Jamal Khan.

District 4 covers the upper expanse of San Jose. Sandwiched between the neighboring cities of Santa Clara and Milpitas, the district spans the Berryessa and Piedmont neighborhoods and Alviso, a largely Latino community that abuts the marshy, southernmost shoreline of the San Francisco Bay.

With San Jose’s first BART station expected to open in the coming year and thousands of new housing units in the pipeline, District 4 has become the most industrious, fastest-growing parts of the city—hands down.

Thirty-five-year-old Lan Diep nabbed the D4 seat in 2016 by a margin of of just 12 votes and went on to position himself as one of the more conservative members of the council.

Born in Houston to Vietnamese refugees who worked odd jobs to put food on the table, according to his campaign bio, Diep moved to San Jose with his mother after his parents divorced. Diep attended Independence High School, where he says he would often arrive late because the public buses he took tended to break down.

Before venturing into the world of politics, Diep worked as a fellow for the Legal Aid Society’s Vietnamese American Workers’ Rights Project. That fellowship was preceded by an earlier stint at the Mississippi Center for Justice, where he worked on the frontlines of the 2010 BP oil spill by helping fishermen and small business file claims against the oil and gas corporation for destroying their livelihoods. 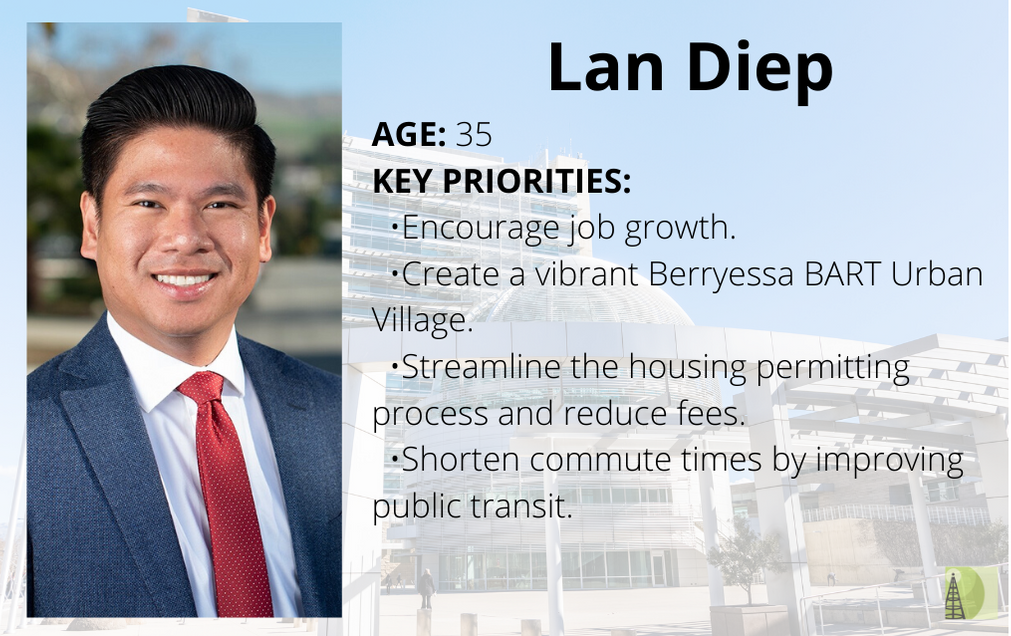 Over the last three years, Diep has established himself as a loyal ally of Sam Liccardo, supporting many of the business-backed mayor’s initiatives around housing production by making it easier for developers to build.

The councilman says his inclination toward public service is what makes him most qualified for the job. “That desire to serve is something that fuels me,” he says. “It’s something that brings me joy in this world that can be quite strenuous or dry at times.”

If re-elected, Diep says he wants to focus on encouraging economic growth by expanding the corporate tax base enough to fund much-needed amenities in San Jose.

With that in mind, he says he’s eager to see the Berryessa Urban Village sprout up around the new North San Jose BART extension. That 270-acre swath of land is key for the city’s future as it looks towards densifying and creating transit-oriented communities, he says, and he hopes to advance toward that goal during another four years on the council.

David Cohen, a 51-year-old father of two, has lived with his wife in the district for the past 21 years. A San Diego native, he moved with his parents to the East Coast as a young child and decided to return to California after graduating from Cornell University. He went on to earn his Ph.D in chemical engineering at UC Berkley and eventually settled in North San Jose with his wife.

In addition to a resume that boasts two decades in high-tech, Cohen has managed to dedicate a significant portion of time to public service, with 13 years as a Berryessa Union School District trustee and an earlier stint on San Jose’s Library Commission. On his campaign website, he cites protecting classroom sizes, switching to solar energy and starting dual-immersion programs in Mandarin and Spanish as some of his top accomplishments as a trustee.

Cohen says his unique mix of experience makes him well-positioned to serve the needs of D4 families and the city’s business community. 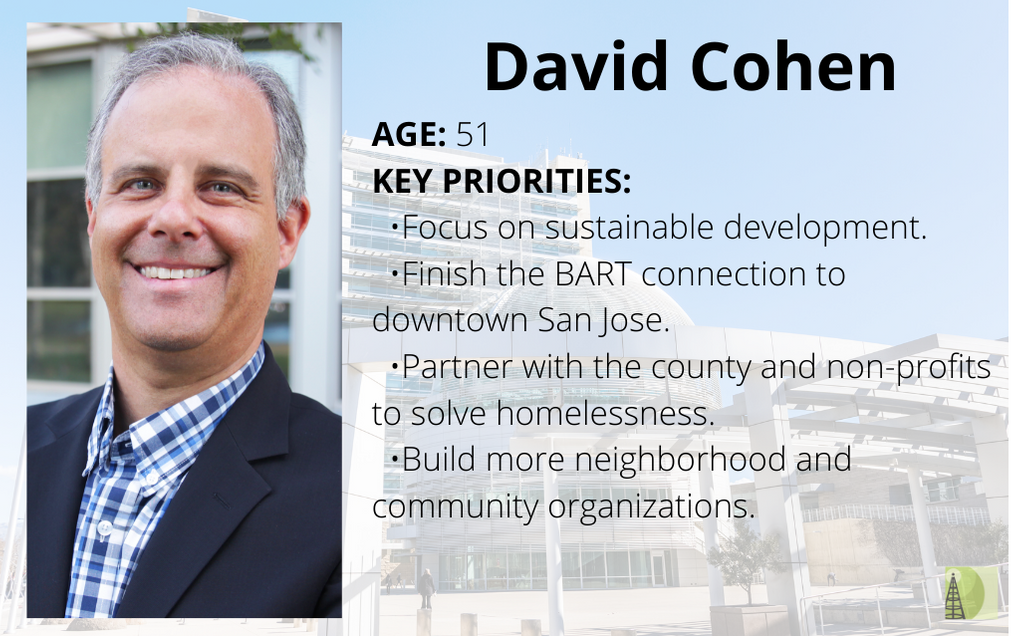 As North San Jose looks to add thousands of new homes in the coming years, Cohen says he wants to ensure that the city enforces its inclusionary housing requirements—especially around the new BART station. The policy requires developers to either build a certain amount of affordable units on-site or pay an in-lieu fee. “We’re not building enough resources for the neighborhoods so that people can really live in what we’ve termed in San Jose as transit villages,” he explains.

New development, he adds, should also be constructed in a sustainable way that’s carbon neutral and minimizes water usage. Another one of Cohen’s priorities is to work with non-profits to find compassionate solutions to homelessness. He also says that the city needs to start taking more of a regional approach to some of its most pressing issues.

“One of our problems—and this goes for transportation, housing and homelessness—is to make sure we’re not acting as individual entities with separate borders,” he says. “But [instead], bringing people together from across the county and across the region to find solutions to homelessness rather than having each city solving things themselves.” 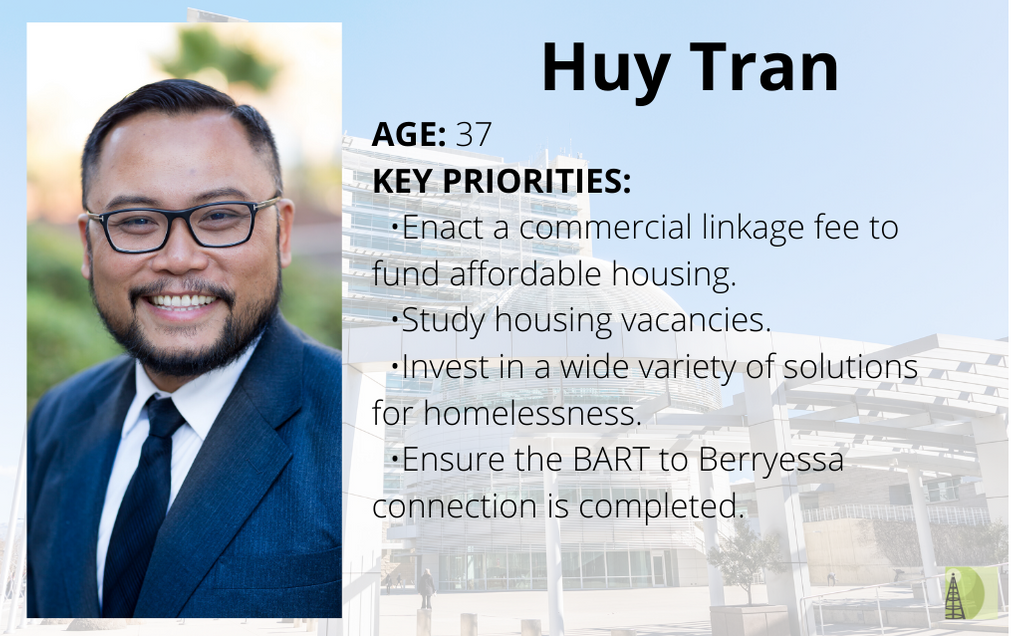 Thirty-seven-year-old Huy Tran decided to jump into the D4 contest last year after the council voted to re-examine San Jose’s Ellis Act—a law that aims to preserve rent-controlled units when a landlord decides to redevelop the property. In the midst of a state-wide affordability crisis, he says the move made no sense to him.

Born in Southern California to Vietnamese refugees who escaped Da Nang by boat, Tran found his way to the South Bay as a young adult attending San Jose State University, where he became an active student organizer.

After college, he went to work for the California Faculty Association to fight then-Gov. Arnold Schwarzenegger’s budget cuts. He also worked for the AFL-CIO in Mississippi, advocating for hotel workers’ rights. After earning a law degree from Santa Clara University, he jumped into his current role as an employment rights attorney who frequently takes on wage theft cases.

Tran has focused much of his campaign on the need for San Jose to build more affordable housing and bolster anti-displacement protections. He says one of his top priorities is to get the council to finally enact a commercial linkage fee, which would raise money from new development to fund below-market-rate housing.

“We know there’s going to be a lot of commercial development happening and these companies they want to be good neighbors with us,” he says. “They need to contribute to the problems that they’re going to exacerbate.”

When it comes to affordable housing, Tran says he’s also interested in studying vacancy rates and how they impact the affordability crisis. Last year, while serving on San Jose’s Housing and Community Development Commission, he proposed the idea of taxing owners of vacant units.  In recent months, he has also been advocating for Westwinds Mobile Home Park residents, who abruptly found out in January that they could be forced out when the land lease expires.

Tran says he also wants to find ways to shield small businesses from displacement. “We need to protect the small businesses that have built the culture of those that are in San Jose,” he explains. “It’s those mom-and-pops that make us who we are. If you look around the Berryessa area, there’s a lot of small businesses.” 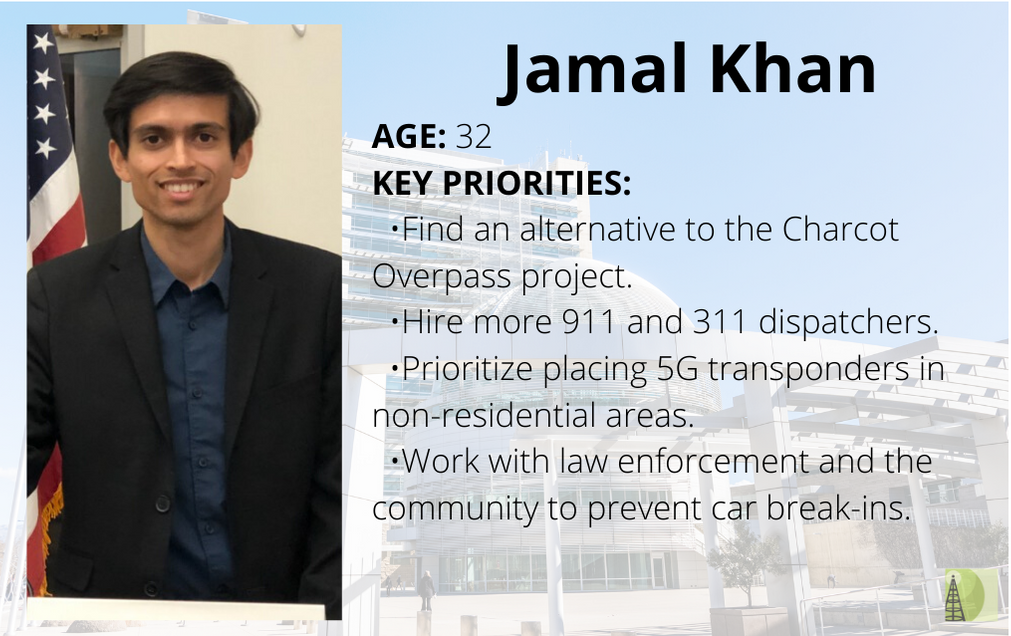 Thirty-two-year-old Jamal Khan holds the distinction of being the only San Jose native in the D4 City Council race this year.

The near-life-long D4 resident attended UC Berkeley as a triple-major in economics, political science and rhetoric with a minor in global poverty and practice. He then proceeded to Harvard Law School while interning for the U.S. Permanent Subcommittee on Investigations and the Office of Government Ethics during summer breaks.

Khan’s resume touts a long list of public service experience, including work for the White House Office of Intergovernmental Affairs and the White House Council on Environmental Quality under the Obama. Most recently, Khan founded the American Opioid Project, which he calls a “crowdsourced encyclopedia of the opioid crisis.”

The attorney is also the only candidate in the race who didn’t scoop up endorsements from San Jose’s powerful labor or business organizations—Diep has the backing of the Silicon Valley Organization while the South Bay Labor Council gave both Tran and Cohen its blessing. But Khan views that lack of institutional support as a positive—it’s what sets him apart, he says.

“I’m not a fan of the City Council race here being almost like a pawn in a chess game between outside groups that are not even based here in the district,” Khan says. “I think that the council member who represents this district should be responsive to this district and prioritize the needs of the people who live here over any other considerations.”

And that, he says, is what he plans to do.

One way Khan plans to accomplish that is by tackling an issue that’s plagued residents near Orchard Elementary School for years: the Charcot Overpass. The controversial project would widen roads near the school, which has parents alarmed over safety and pollution concerns. “That’s something that concerns me greatly and that’s something that I’m going to take a very hard look at,” he says. “I think there should be an attempt to find some type of alternative that does not adversely impact the people who live in that area.”

D4 residents have also been grappling with car break-ins in recent years, he notes, which is why he says he’d like to enhance communication between police and the public and hire more 9-1-1 dispatchers and cops.

As for easing the city’s storied affordability crisis, Khan says he wants to explore additional ways to protect renters.

“When it comes to affordable housing, I think that the state bill that passed into law that does the rent cap was a good step,” he says. “I’m open to having the city look at making a tighter rent cap of perhaps 2 percent or 3 percent plus inflation.”

San Jose State political science professor Garrick Percival says the D4 race is definitely one to watch. Labor interests currently have a minority vote on the council, but stand to regain a majority by flipping the incumbent councilor’s seat.

Races in District 4 have been historically close, he adds. If the trend repeats itself, that would force Diep into a November run-off.